File System in Linux :
Linux supports more than 12 file systems with NFS technology. When Linux (that is, operating system code) is linked, the default file system option needs to be specified. other file systems can be called dynamically depending on requirements. Ext file system is the most popular option. It is similar to the Berkeley file system.

This file system assumes that the disk begins with a boot block and then the disk is created from a series of other blockgroups. Block groups are numbered sequentially, and contain several subfields.

The overall organization is shown in figure. 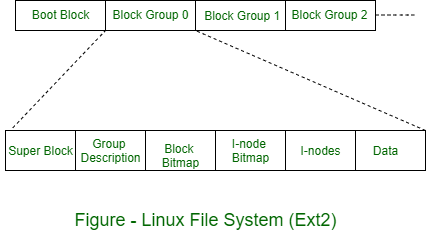 File System in Windows :- Windows 2000 (W2K) supports a number of file systems including the file allocation table (FAT) that runs on Windows 95, MS-DOS and OS/2. But the developers of W@K also designed a new file system, the W2K file system (NTFS), that is intended to meet high-end requirements for workstations and servers.

Examples of high-end applications include the following-