Common Git Problems and Their Fixes

Git, as we know is a free and open-source version control system. These days git is being extensively used and therefore this article focuses on some of the common git tricks which everybody at some point of time requires while working with git or Github. Sometimes the user performs some mistakes while working on Git which results in the loss of information or wrong information being added.

To overcome this problem, Git provides some methods/tricks to rollback or modify the changes that were made wrong or made by mistake. Some of these problems along with their fixes are listed below:

Sometimes while writing the commit message, we make a typing error. The following commands can be used to fix the issue. Note that the below command creates a new commit so avoid using –amend for modifying commits which have been already pushed to a central repository.

If you forget to add a file while git add, then just add it and amend the previous commit.

–amend is very useful to edit a commit message but it will not work if the commit you want to do is not the last one. In that case, rebase is used.

This will give the following menu: 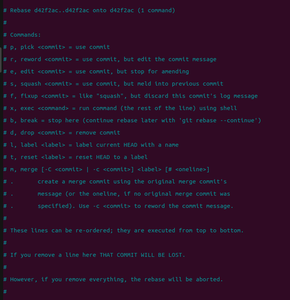 You will see a list of options that you can use to be taken to a view where you can edit the message. However, as can be seen from the above listing, interactive rebases offer a lot more than simple commit message editing: you can completely remove commits by deleting them from the list, as well as edit, reorder, and squash them. Squashing allows you to merge several commits into one before pushing them to the remote.

Sometimes we realize that there is some error /mistake but by that time a few of the changes are committed locally.

Remove a file from GIT without removing from the file system

If you are not careful, you may add some unnecessary files during git add.

If you try to use git rm, it will remove the file from both the staging area as well as the file system.

This command removes the staged version only and adds the file to your .gitignore  to avoid making the same mistake again. 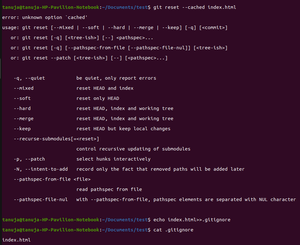 Sometimes faulty commits do make it into the central repository even after amend and rebase. Therefore you can use the below commands

However, If you don’t want to create additional revert commits but only apply the necessary changes to your working tree, you can use the –no-commit/-n option.

Suppose your team is working on various feature branches at the same time. Now you want to merge all of them together. There are several merge conflicts, which you resolve. But it turns out that one of the branches isn’t quite there yet, so you decide to un-merge it again. After few days when the branch is finally ready,you merge it again, but thanks to the recorded resolutions, you won’t have to resolve the same merge conflicts again.

Find a commit that broke something after a merge

Sometimes there is a need to find a commit that changed the project wrongly. This bad commit is difficult to find and hence consumes a lot of time. Git has introduced a method to find this commit which broke something after the merge:

My Personal Notes arrow_drop_up
Previous
AMCAT Test Experience 2021
Next
Optimization for Data Science
Recommended Articles
Page :
Jenkins and GIT Integration using SSH Key
09, May 20
Difference Between Git and GitHub
23, May 20
Difference Between GIT and SVN
06, Jul 20
Difference between MERCURIAL and GIT
08, Jul 20
What is Git-Ignore and How to Use it?
08, Jul 20
Take Advantages of Git and GitHub to Stay Motivated & Consistent While Coding
06, Dec 20
Using Refs and Reflogs in Git
14, Dec 20
Useful Git Commands and Basic Concepts
28, Dec 20
Pushing changes to a Git Repository
27, Dec 19
What is a GIT Repository?
29, Nov 19
Git Features
05, Dec 19
Bare Repositories in Git
17, Dec 19
Working with Git Repositories
18, Dec 19
Merge Strategies in Git
31, Dec 19
Getting changes from a Git Repository
15, Jan 20
Git | Working with Stash
19, Feb 20
Handling repositories with Git remote
02, Mar 20
Using Git on CommandLine
30, Mar 20
Working on BitBucket using Git
31, Mar 20
Working on Git for GUI
01, Apr 20
Using Patches in Git
14, Apr 20
Rebasing of branches in Git
30, Apr 20
Recovering Lost Commits in Git
05, May 20
Working on Git Bash
29, May 20
Article Contributed By :