Printing command options: In order to view the command-line flags for any version of the node, we can use the –help flag. Write the below code in the terminal: 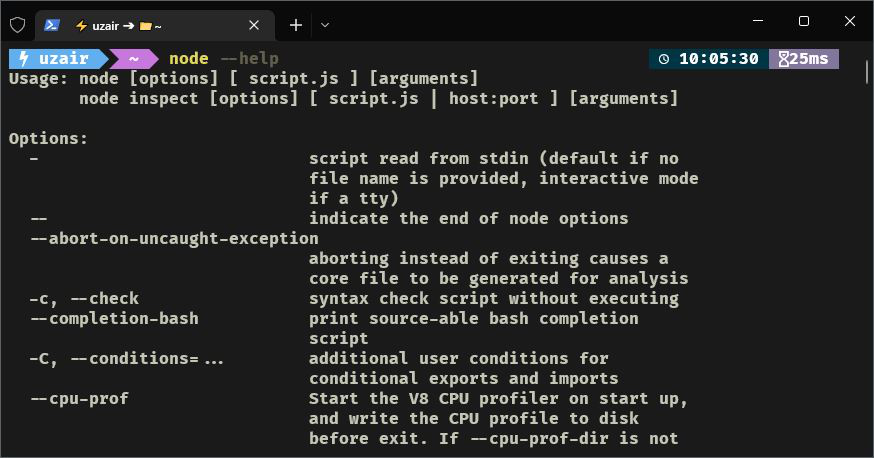 Beyond the Node command line flags, there are additional flags for modifying the JavaScript runtime engine: V8. To view, these flags run node –v8-options. Write the below code in the terminal: 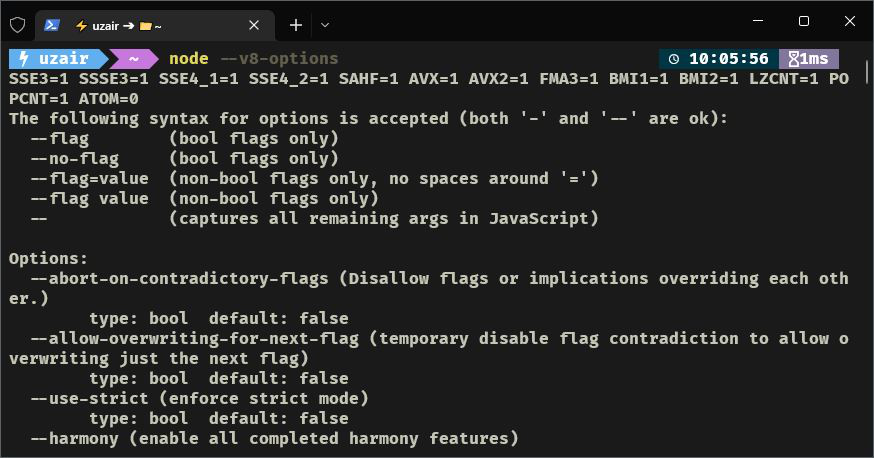 This was all about the command line, now we need to know how to use it in order to save the hassle while the program is being executed. As you might know, the most basic requirement for a program to execute is that there shouldn’t be any syntax errors. Some popular IDEs like VS Code come with tools like Intellisense which informs the users in case of any syntax errors, but what if you don’t want to use the extensions and actually use the command line to know if there are any syntax errors. The node binary aids this too.

Checking the Syntax: It is possible to parse the JavaScript Application without actually running it, just to check the syntax.

To check the Syntax we can use:

Note: Any one of the flags can be used from the above list. On successful parsing one of the two things happen:

Example 1: This is Case 1 where there isn’t any syntax error:

Example 2: This is Case 2 where there is a syntax error.

In this way, we can check whether or not our code has any syntax errors.

Dynamic Evaluation: Node can directly evaluate code from the shell, which becomes very useful for quickly checking a code snippet. There are two flags that can evaluate the code. They are as follows:

Here are a few examples of how the –print and –-eval flag works:

As you can see the –p flag evaluates the expression 2+2  and prints 4 as the output.

Consider another example that evaluates the console.log function in the command line:

The –eval or -e flag doesn’t generate any output but here, as the console.log prints 2, the output is explicitly generated.

Similarly, when console.log  is evaluated using the –print flag, this is what we get as the output:

2 is generated as output because it is explicitly printed using the console.log function, also undefined is printed in the terminal because console.log itself returns undefined.

Another example is where we can use the -p or –-print flag to print all the files with the .js extension in the current working directory.

For the below example, these are the files that we have in the current directory: 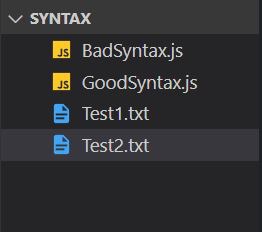 We can use the –print flag as follows:

Pre-Loading CommonJs Modules: The command line flag -r or –require can be used to preload a CommonJS module before anything else loads.

Suppose that there are two files preload.js and app.js, and their content is as follows:

Now in order the preload a file over another, we can use the –require flag as follows:

Preloading modules is useful when using consuming modules that instrument or configure the process in some way.

NOTE: There are two module systems that Node uses, CommonJS and ESM, but it’s important to note here that the –require flag can only preload a CommonJS module, not an ESM module. ESM modules have a vaguely related flag, called –loader, a currently experimental flag that should not be confused with the –require preloader flag. For more info on CommonJS and ESM modules, refer to the node documentation here.

Stack Trace Limit: Stack traces are generated for any Error that occurs, so they’re usually the first point of call when debugging a failure scenario. By default, a stack trace will contain the last ten stack frames (function call sites) at the point where the trace occurred. This is often fine because the part of the stack you are interested in is often the last 3 or 4 call frames. However, there are scenarios where seeing more call frames in a stack trace makes sense, like checking that the application flow through various functions is as expected.

The stack trace limit can be modified with the –stack-trace-limit flag. This flag is part of the JavaScript runtime engine, V8, and can be found in the output of the –-v8-options flag.

Consider a file named will-throw.js, with the following contents:

When we execute the following command in the command line:

There will be only ten stack frames in the error output because the limit is explicitly set to 10.

What if we set the limit to say 1000, something like this:

In this case, we can display output to 1000 stack frames.

We see that setting the stack trace limit to a number higher than the number of call frames in the stack guarantees that the entire stack will be output (In our case greater than 85).

But wait, is it really feasible to change the default limit of the stack frames?

The answer is NO because in production scenarios the overhead involved with retaining long stacks will not only cause overhead but also consume a lot of memory space, ultimately degrading the performance of your application.

My Personal Notes arrow_drop_up
Previous
Next.js Create Next App
Next
Role of ViewPort in Visual Formatting Model
Recommended Articles
Page :
How to read command line arguments in Node.js ?
20, Mar 20
How to kill all instances of a Node.js process via command line ?
08, Apr 21
How to Build a JavaScript Command Line Interface (CLI) with Node.js
03, Aug 21
How to print command line arguments passed to the script in Node.js ?
07, Oct 21
How to build your own CLI (Command Line Interface) with Node.js ?
22, Mar 22
How to parse command line arguments in node.js ?
09, Dec 20
How to read a file line by line using node.js ?
19, May 20
How to resolve 'node' is not recognized as an internal or external command error after installing Node.js ?
09, Jul 20
How to execute TypeScript file using command line?
05, Feb 20
Command Line Arguments in ElectronJS
10, Jun 20
How to find relevant emoji from text on the command-line?
22, Feb 21
How to open Node.js command prompt ?
18, Aug 21
How to show the line which cause the error in Node.js ?
26, Aug 22
Node.js | NPM (Node Package Manager)
28, Apr 18
Node.js Automatic restart Node.js server with nodemon
08, Apr 19
Top 3 Best Packages Of Node.js that you should try being a Node.js Developer
14, Dec 20
Node.js Connect Mysql with Node app
12, Apr 19
How to replace line breaks with <br> using JavaScript ?
14, Apr 21
Fabric.js line lockScalingFlip Property
19, Jan 21
Fabric.js line selectable Property
21, Jan 21
Fabric.js line scaleY Property
21, Jan 21
Fabric.js Line Class Complete Reference
04, Apr 22
XSS Prevention : Without Writing Single Line of Code
27, Mar 19
p5.js | line() Function
08, Apr 19
Article Contributed By :