A Collision occurs when a powerful force strikes on two or more bodies in a relatively short period of time. Collision is a one-time occurrence. As a result of the collision, the involved particles’ energy and momentum change. The collision may occur as a result of actual physical contact between the participating bodies, such as a collision between two billiard balls or a ball and bat. There may be collisions where there is no direct physical touch, such as an alpha particle colliding with a nucleus.

Any collision is led by three different definable stages, namely before, during, and after the impact. Because the particles are independent before the collision, the interaction forces between them are zero. Furthermore, following the impact, the force returns to zero. Because the particles come into touch with each other during the collision, the force of interaction becomes extremely strong. The dominant forces direct the movement of the bodies. Because the amount of the interacting force is unknown in most practical circumstances, Newton’s second law of motion cannot be used in such cases. The initial and final velocities can be computed using the law of conservation of momentum.

The following cases may arise in case of elastic collision between two bodies :

Let us consider a system of two particles without the existence of any external forces. The first particle of mass m1 moving with an initial velocity of

and the second particle of mass m2 which is initially at rest position. The interacting particles undergo a collision where the first particle moves with velocity

and the second particle with velocity

The angles θ1,f and θ2,f made by the particles along with the positive forward direction of the first particle are called the laboratory scattering angles. 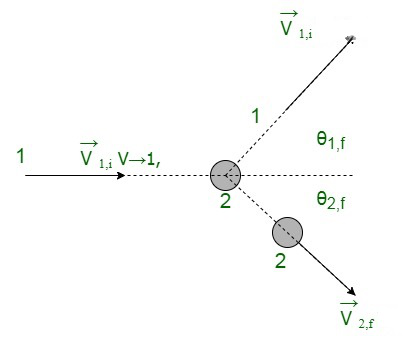 The problem statement is to determine the magnitudes and directions of each of the final velocity vectors,

. The total kinetic energy and momentum are conserved in the whole system.

The components of the total momentum are obtained by,

The components of momentum in the final state are obtained by,

Since, the total momentum is conserved, we get,

Further from above equations, we obtain,

Since, the kinetic energy is preserved during an elastic collision,

Squaring and adding each of the expressions in eq (9) and eq(10),

Finding solution of quadratic equation, we can obtain the following results,

We can conclude that the relationship between the scattering angles is independent of the masses of the colliding particles.

the scattering angle for the second particle can be computed by,

Using eq (10), in order to compute the final velocity of the first particle,

Let us assume a body to be of mass m1colliding with an infinite mass at rest. Let us assume its velocity be un along the normal before collision and in the tangential direction to be ut

Let us assume a body to be of mass m. The second body holds the same mass m and is initially at rest.  The two interacting particles undergo collision.  Let us assume the velocity to be un along the normal before collision and ut along the tangent.

The equation can be further solved to obtain, 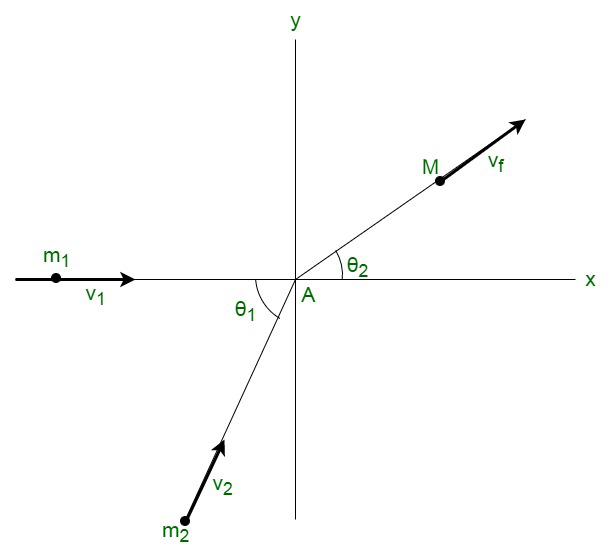 The law of conservation of energy is not applicable in an inelastic collision. The equations of momentum can be generated for masses in both the x and y directions, by shifting the orientation of the object with mass m1 in the x-axis direction.

Deflection of a moving particle by a particle at rest 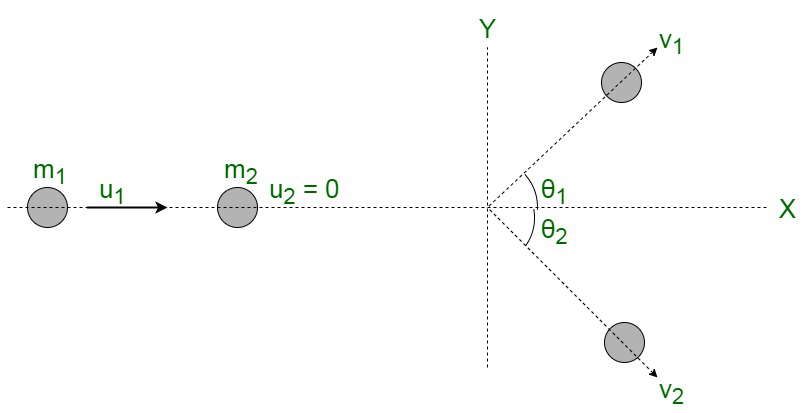 According to the law of conservation of linear momentum ,

For components along the x-axis, we have,

For components along y-axis,  we have,

Since, the system reduces to the availability of three equations and four unknown variables, solving the system with only these values becomes impossible.

Problem 1: A mass of 10 kg is traveling with a velocity of 30 m/s in the positive y-axis. The mass undergoes a collision with another object of mass 40 g moving along the negative y-axis at a speed of 50 m/s. Calculate the final velocity.

According to the law of conservation of momentum, therefore,

Momentum before impact = Momentum After Impact

Equating the values, we get,

Since, the 40g particle is moving in negative direction, we have,

Problem 2: There is an isolated system containing three masses, m1 = m2 = 2 m and m3 = 3 m. All the masses travel in direction, but with the same initial velocity equivalent to v0. The bodies collide and undergo an elastic collision. Compute the maximal possible final speed of each of the three bodies.

The maximum speed is attained when the speeds of other particles is reduced to zero.

Substituting the values of the masses,

Since, we know, that the force acting on the body of mass ‘m’ is the normal reaction force of the surface. The change in momentum taken parallel to the surface will be equivalent to 0, since no parallel force acts on the ball.

When two bodies of unequal mass collide, the force acting on both objects is not equal and opposite in nature. Both the interacting particles experience unequal accelerations during the collision because of the contact forces.