A closure is a feature of JavaScript that allows inner functions to access their outer scope. Closure helps in binding a function to its outer boundary and is created automatically whenever a function is created. A block is also treated as a scope since ES6. Since JavaScript is event-driven so closures are useful as it helps to maintain the state between events.

Let’s see and understand closure through an example. 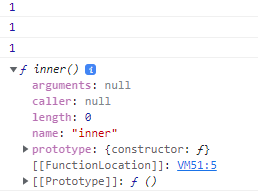 In programming languages, closures (also lexical closures or function closures) are techniques for implementing lexically scoped name binding in languages with first-class functions. Operationally, a closure is a record storing a function[a] together with an environment:[1] a mapping associating each free variable of the function (variables that are used locally, but defined in an enclosing scope) with the value or reference to which the name was bound when the closure was created.[b]
-Wikipedia

In other words, closure is created when a child function keep the environment of the parent scope even after the parent function has already executed

Now let’s look at another example.

Now let’s see an example of closure within a loop.
In this example we would to store a anonymous function at every index of an array.

Lets see the correct way to write the above code so as to get different values of i at different indexes.

Explanation: In the above code we are updating the argument of the function create_Closure with every call. Hence, we get different values of i at different index.

Note : It may be slightly difficult to get the concept of closure at once but try experimenting with closure in different scenarios like for creating getter/setter, callbacks and so on.