In our surroundings, we come across things that are different in shape, size, height, structure, and texture. According to scientists everything in this universe is made up of a material called ‘matter’. We can see that matter occupies some space and mass, in another way we can say that matter has some ‘volume’ and ‘mass’. However, in ancient times there was no clue to the scientists therefore at that time Indian Philosophers believed that everything in this universe either living or non-living can be divided into ‘panch tattvas i.e. Air, Water, Fire, Sky, and Earth.

Now in this article, we will discuss about matter, its physical properties on the basis of its classification and will also study its types i.e. solid, liquid, and gas in brief.

Matter refers to the material things around us which have mass, occupied space and its presence can be felt by any one or more of our five senses. Everything in this universe is made up of material that scientists have named ‘matter’.

For example- the water, air, stars, plants, a small drop of water, or even a small sand particle is matter, but emotions like love, hate, hurt, etc. are feelings but not matter.

The matter is anything that occupies space and has mass.

Space: Space occupied by a substance is known as ‘volume’.

Mass: The quantity of metal present in an object is called its ‘mass’.

Note: Both sugar and salt are made up of very small particle which break off from each sugar granule and get disappeared in water on dissolving, that’s why solution tastes sweet, but particle cannot be seen, this shows that water have enough space to adjust (dissolve) tiny sugar or salt particle.

Now, let’s study the properties of the three major states of the matter in detail 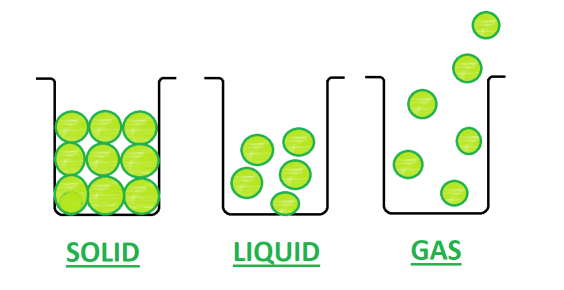 Difference Between Solid, Liquid and Gas

Intermixing of particles of two different type of matter on their own is called diffusion.

The spontaneous intermixing of particles of two different types matter is called diffusion. The rate of diffusion becomes faster with increase in temperature because at high temperature the particles have more energy and hence move faster.

For example -aroma of perfume, smell of hot sizzling food

Question 2: What is inter-particle force of attraction?

Matter have interparticle force of attraction. This force keeps the particles together. It depends on nature of matter.

The particles of matter are so small that we can’t even see them with the naked eyes.

Question 4: What happens when a swollen balloon is poked with a pin?

It will burst and diffusion will take place.

Question 5: What is the reason behind the observation, that liquid can not be compressed while gasses can?

Question 6: Why solids have a fixed shape?

Solids have fixed shape because their intermolecular force is very strong that’s why always holds up a regular geometrical structure.

Question 7: Arrange the following substances in decreasing order of the intermolecular force of attraction.

Question 8: What is the Brownian Movement?

The zigzag movement of the small particles suspended in a liquid or gas is called Brownian movement.