Question 1. ABC is a triangle and D is the mid-point of BC. The perpendiculars from D to AB and AC are equal. Prove that the triangle is isosceles. 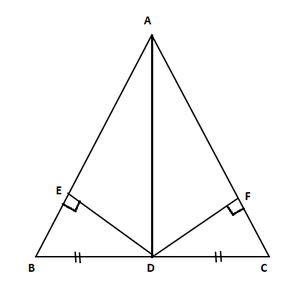 Prove: ΔABC is an isosceles triangle

So, ΔABC is an isosceles triangle because two sides of the triangle are equal.

Question 2. ABC is a triangle in which BE and CF are, respectively, the perpendiculars to the sides AC and AB. If BE = CF, prove that ΔABC is isosceles. 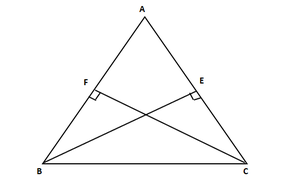 To prove: ΔABC is isosceles

and AC = AB [Because opposite sides to equal angles are equal]

So, ΔABC is isosceles

Question 3. If perpendiculars from any point within an angle on its arms are congruent. Prove that it lies on the bisector of that angle. 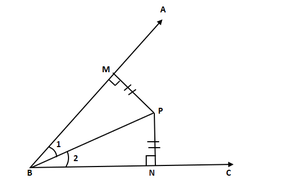 Let us consider ∠ABC and BP is an arm within∠ABC

So now draw perpendicular from point P on arm BA and BC, i.e., PN and PM

Prove: BP is the angular bisector of ∠ABC.

and BP is the angular bisector of ∠ABC. 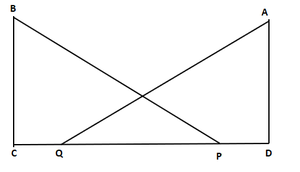 So by adding PQ on both sides, we get

Question 5. ABCD is a square, X and Y are points on sides AD and BC respectively such that AY = BX. Prove that BY = AX and ∠BAY = ∠ABX. 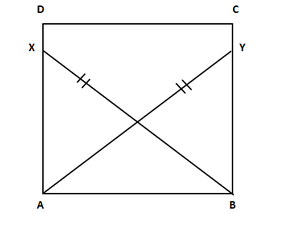 X and Y are points on sides AD and BC

Question 6. Which of the following statements are true (T) and which are false (F):

(i) Sides opposite to equal angles of a triangle may be unequal.

(ii) Angles opposite to equal sides of a triangle are equal

(iv) If the altitude from one vertex of a triangle bisects the opposite side, then the triangle may be isosceles.

(v) The bisectors of two equal angles of a triangle are equal.

(vi) If the bisector of the vertical angle of a triangle bisects the base, then the triangle may be isosceles.

(vii) The two altitudes corresponding to two equal sides of a triangle need not be equal.

(i) Sides opposite to equal angles of a triangle are ___

(ii) Angle opposite to equal sides of a triangle are ___

(iii) In an equilateral triangle all angles are ___