Answer: It is a rhombus or square their diagonals are perpendicular bisector of each other 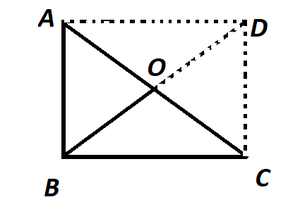