Question 11. The areas of two similar triangles are 121 cm2 and 64 cm2 respectively. If the median of the first triangle is 12.1 cm, find the corresponding median of the other.

Hence, the median of the second triangle is 8.8cm

Question 13. In ∆ABC, PQ is a line segment intersecting AB at P and AC at Q such that PQ || BC and PQ divide ∆ABC into two parts equal in area. Find BP/AB.

It is given that, in ∆ABC, PQ || BC and line PQ divide the ∆ABC into two parts

Now we have to find BP/AB.

As we know that PQ||BC

Hence, the length of QR is 6cm 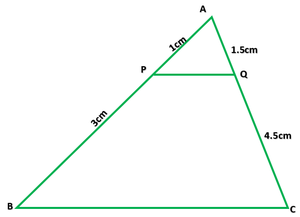 Given that, in ∆ABC, P and Q are two points on line AB and AC 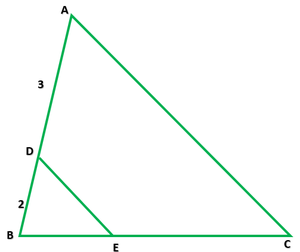 Question 17. If ∆ABC and ∆BDE are equilateral triangles, where D is the mid point of BC, find the ratio of areas of ∆ABC and ∆BDE. 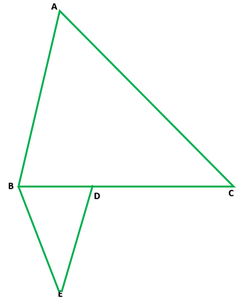 Given that ∆ABC and ∆DBE are equilateral triangles, where D is mid point of BC

and area of ∆DBE

So, the ratio between areas is

Question 18. Two isosceles triangles have equal vertical angles and their areas are in the ratio 36 : 25. Find the ratio of their corresponding heights.

Let us consider two triangles, ∆ABC and ∆XYZ and these triangles have equal vertical angle, i.e., ∠A and ∠X

And AD and XO is the heights of these triangles.

Hence, the ratio of their corresponding heights is 6:5

Question 19. In the figure, ∆ABC and ∆DBC are on the same base BC. If AD and BC intersect at O, prove that 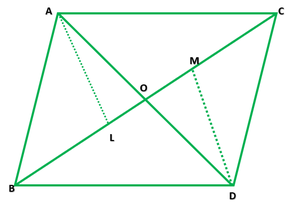 AC and BD intersect each other at O

Question 20. ABCD is a trapezium in which AB || CD. The diagonals AC and BD intersect at O. Prove that 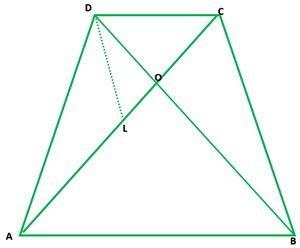 Now, in the figure from point D, draw DL⊥AC

So, by AA criterion 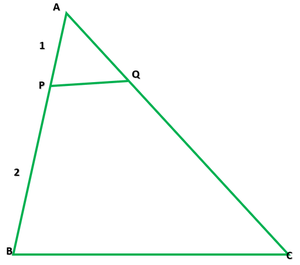 Given that, ABC is a triangle, in which P divides the side AB such that

So, by AA criterion

Hence, the ratio of the areas of ∆APQ and trapezium BPQC is 1:9 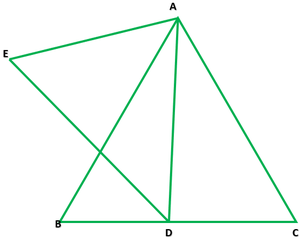 Given that AD is an altitude of an equilateral triangle ABC.

On AD as base, another equilateral triangle ADE is constructed