Circle is a collection of points that are at a fixed distance from a particular point. The fixed point is called the centre of the circle and the fixed distance is called the radius of the circle. We come across many objects in real life which are round in shape. For example, wheels of vehicles, bangles, dials of telephone, etc. In the clock also, its hands move in a round fashion repeatedly. The path traced by the tip of the hands of the clock is called a circle.

Let’s look at some terminology related to a circle in brief: 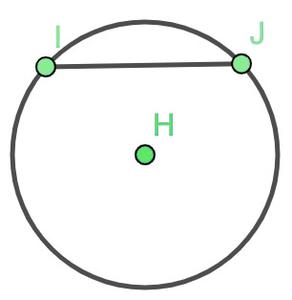 Angle Subtended by a Chord at a Point 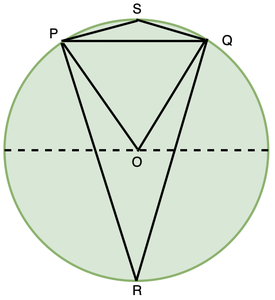 We are given two chords KL and JI. We need to prove that ∠KHL = ∠JHI. 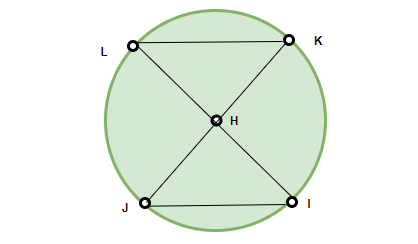 In triangles KHL and JHI,

and we are given that KL = JI.

So, both the triangles are congruent. Thus, both of these angles are equal. Hence, proved.

Question: If ∠AOB = 50° in the figure given below, what will be the angle subtended by ∠COD, provided that the chords AB and CD are equal. 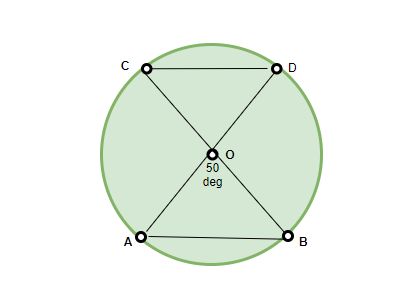 According to the theorem mentioned above, the angles ∠AOB and ∠COD are equal, since they are equal chords subtending equal angles at the centre. Therefore, ∠COD = 50°.

Note: The converse of this theorem “If the angles subtended by two chords at the centre are equal, then the two chords are equal” is also true and can be proved similarly by the properties of triangles.

Perpendicular from the Centre to a Chord 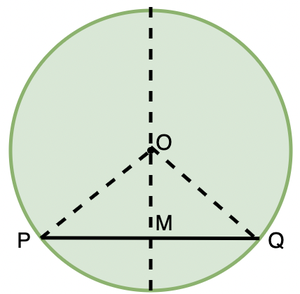 Theorem: The line drawn through the centre of a circle to bisect a chord is perpendicular to the chord

Let PQ be the chord of a circle and OM be the line from the centre that bisects the chord. Here, M is the mid point of the chord, and we have to prove that ∠OMQ = 90°.

OP = OQ (radius of the circle)

OM = OM (common side of both the triangles)

So, both these triangles are congruent. This gives, angles ∠OMQ and ∠OMP as 90°

Note: The converse of this theorem “The perpendicular from the centre of a circle to a chord bisects the chord” is also true.

Angle subtended by an Arc of Circle

Similar to the case of chords, equal arcs also subtend equal angles at the centre.

Let’s join AO and extend it to B.

In all three cases, ∠BOQ = ∠OAQ + ∠OQA. (Exterior angle of a triangle is equal to the sum of the two interior opposite angles).

Question: What is the value of ∠ABC? 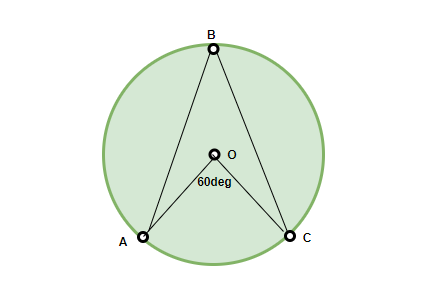 A quadrilateral is called cyclic if all the four vertices of it lie on a circle. 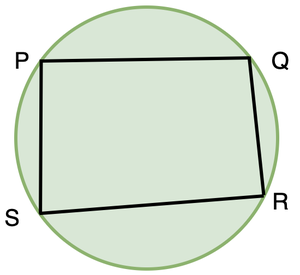 They are also called inscribed quadrilaterals.

Theorem: The sum of either pair of opposite angles of a cyclic quadrilateral is 180º. 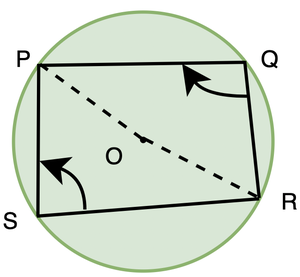 Thus, sum of opposite angles of cyclic quadrilateral is 180°.

Question: In the figure below, BC is the diameter of the circle, ED is a chord equal to the radius of the circle. BE and CD when extended intersect at a point F. Prove that ∠BFC = 60°. 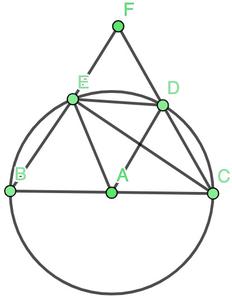 In the figure, join AE, AD and EC. Triangle AED is an equilateral triangle.

So, by the property of exterior angles of triangle,