Chromium is denoted with the symbol Cr, and its atomic number is 24. It is a chemical element which lustrous, steely grey and hard. It’s the first element of 6th group in periodic table. Chromium has high corrosion resistance. Metallic chromium is added to steel to make it highly corrosion resistive, thus forming stainless steel. During the 19th century, chromium is used primarily as a component in paints.Chromium is reflective when polished.
Oxide is a dianion of oxygen. Oxide is a chemical compound which is composed of at least one oxygen atom and one other element in its given chemical formula. Oxygen is a highly reactive nonmetal with atomic number 8. It is colourless and odourless and most abundant element of earth. Oxygen is used in textile and plastic industries, submarines and space flights etc.

Chromium(VI) oxide is also called as chromium trioxide and chromic anhydride. It as a very powerful oxidiser. It is usually dark red granular solid. It is dark purple in anhydrous state. Chromium(VI) oxide is an inorganic compound consisting of chromium and oxygen. It’s chemical formula is CrO3. Now we will discuss about its structure, preparation, its chemical and physical properties and also its essential uses. 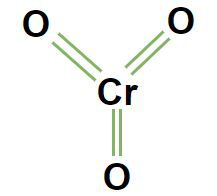 Question 1: How does chromium affect the environment and the human body?

Chromium is toxic. It affects plant metabolism negatively. It kills the growth of vegetables and reduces grain quality. If high levels of chromium is present in water, it may badly affect fish and aquatic animals. If inhaled, it may be dangerous to lungs, and it may also cause sinus cancer , abdominal pain, asthma and other respiratory disorders.

Question 2: How is Chromium(VI) oxide prepared.

Chromium(VI) oxide Is formed when sodium chromate is reacted with sulfuric acid. Nearly one lakh tonnes of Chromium trioxide is produced annually.

Question 3: What happens when it is heated?

If heated, Chromium(VI) oxide decomposes to Chromium(III) oxide, which is Cr2O3. It turns brown while burning and appears in green colour after coming to room temperature. The reaction is

Question 4: How is Chromium(VI) oxide used as an oxidant?

It immediately catches fire, producing Chromium(III) oxide. The chemical reaction is as follows

Question 6: How is Chromium(VI) oxide precipitated from potassium dichromate ?

Question 7: What is Collins’s reagent?

It is a compound of chromium trioxide and pyridine (C5H5N) in dichloromethane (CH2Cl2). It is a red solid. It oxidised primary alcohols to aldehydes. Its chemical formula is C10H10CrN2O3.