Chromatography is a technique used to affect the separation of two or more dissolved solids contained within a solution in very small quantities. In Greek, the word ‘chroma’ means colour and ‘graphein’ is used to indicate writing. Initially, the technique was used for the separation of colors.

The substance that has to be segregated during the process of chromatography is known as an analyte. It basically refers to the component needed from the mixture. It is a physical process in which the solutes, that is the components of a sample mixture are segregated as a result of their differential distribution between the stationary and mobile phases.

The separation technique of chromatography is dependent on the principle of partitioning the constituent components between two phases – a Mobile Phase and a Stationary Phase. The mobile phase is used to indicate the mixture of the substances to be separated and dissolved in a liquid or a gas. The stationary phase is used to describe a porous solid matrix through which the sample present in the mobile phase percolates.

The method of chromatography is based on the fact that the dissolved substances in the same solvent may have differing solubility. The solute with a greater solubility rises faster and segregates from the mixture. 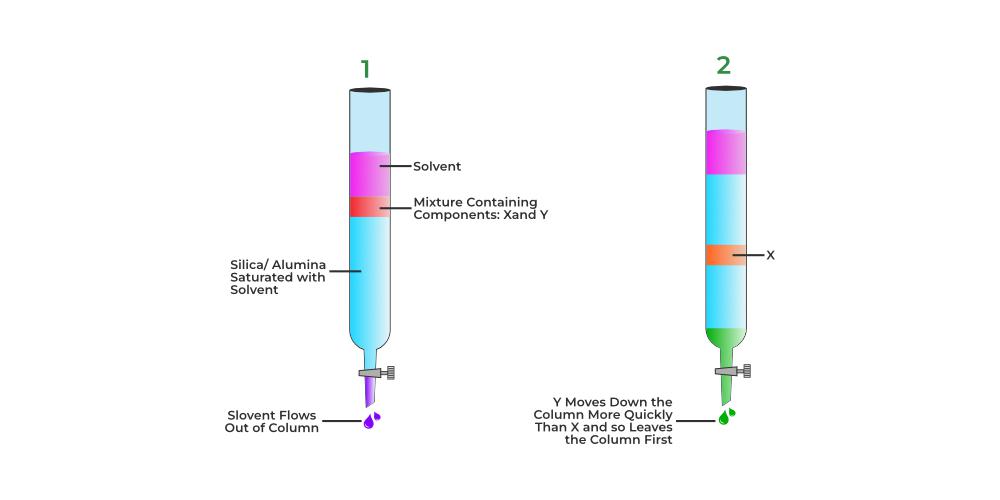 Depending on the component’s absorptivity, different chemicals are adsorbed on the adsorbent to varying degrees in the adsorption chromatography process. The components with higher absorptivity are carried to a shorter distance than those with lower absorptivity in this case as well by moving a mobile phase over a stationary phase. The primary categories of chromatographic techniques used in industries are listed below. 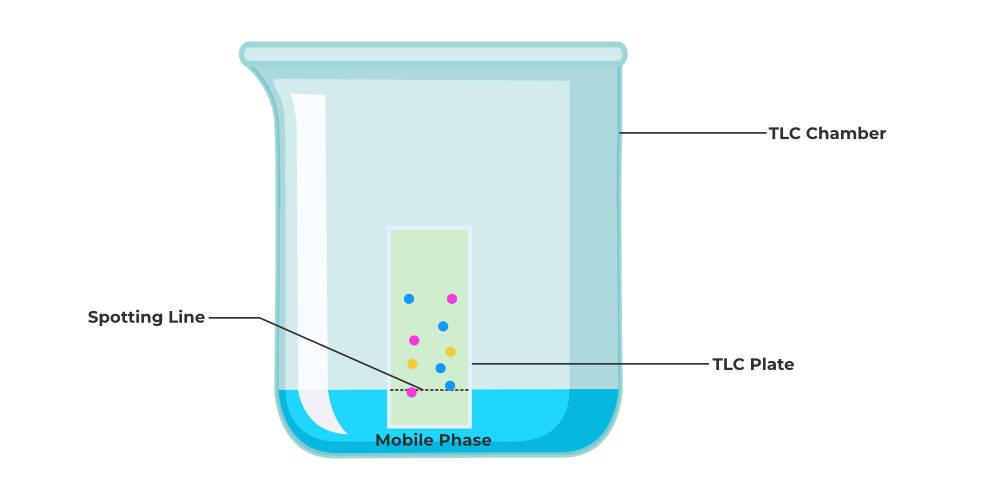 As shown in the image above, the thin-layer chromatography (TLC) procedure uses a glass plate coated with a very thin layer of an adsorbent, such as silica gel or alumina, to separate the mixture of chemicals into its constituent parts.

Chrome plate is the name of the plate used in this technique. A small area of the mixture’s solution is put 2 cm above one end of the plate to begin the separation process. The plate is then placed in a sealed container filled with an eluting fluid, which rises up the plate while lifting various mixture ingredients to various heights. 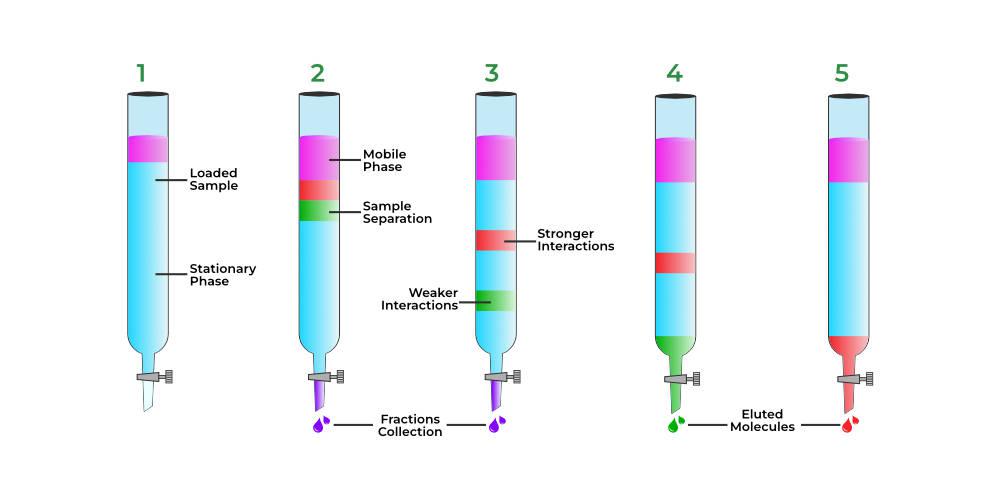 As shown in the figure above, column chromatography is a technique used to separate the components of a mixture using a column of appropriate adsorbent packed in a glass tube. A suitable eluant is produced to trickle gently down the column after the mixture is placed on top of it.

The components are separated based on how much of each component has been adsorbed to the wall of the adsorbent column. The element with the greatest absorptivity is kept at the top while the other elements flow downward to various heights in accordance. 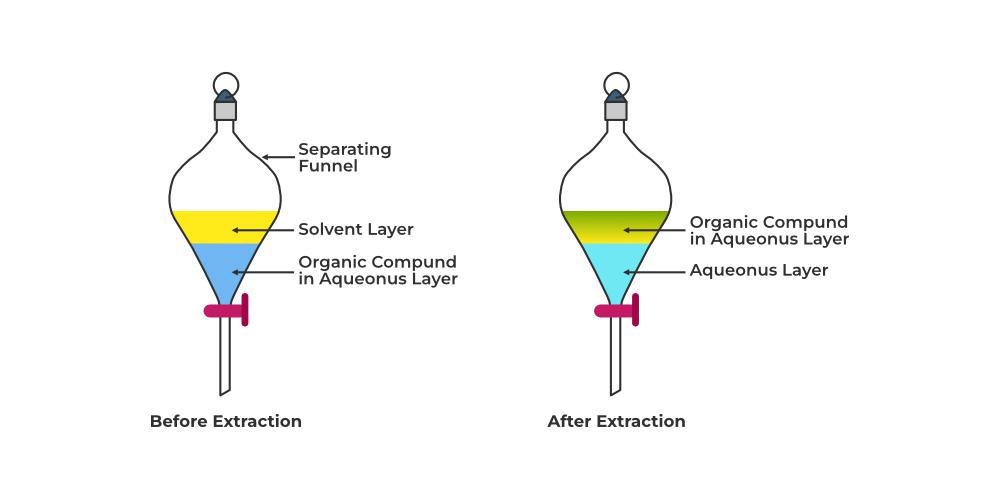 The mixture to be separated is placed at an area at the bottom of the chromatographic paper, and as the solvent rises up the paper, the components are carried to varying degrees depending on how well they adhere to the paper. As a result, the components are divided at various heights.

Here are some important uses and applications of Chromatography in our everyday life:

Paper Chromatography is used to Separate the Colors of a Dye

A thin strip of filter paper is taken and a line using a pencil is drawn at a noticeably visible length from the lower corner of the paper. A drop of ink using a fountain pen is projected at the center of the drawn line. It is dried further. The filter paper is dipped in a beaker containing water as the solvent, in such a way that the ink drop is right above the water level. When the water rises up on the filter strip, it takes along with it the dye particles. Since the dye is soluble in water, the component in the dye with a greater solubility rises higher. As a result of this, the components of the dye get separated.

Chromatography can be used to estimate the shelf life of food items by providing insight into when the food item gets spoiled. It can be used to understand the nutritional value of the food sample. It can be also used to analyze the presence of chemical additives in food. Can be used for the clarification and skimming of milk. Extraction of cream and production of cheese.

The purity detection of water samples and air samples is all done by Chromatography. Detection of the presence of toxic contaminants in pesticides and oils. The most commonly used technique is GC and HPLC.

Chromatography can be used to detect the presence of chemicals and elements in a given sample, present in traces. These chemical compounds can also be segregated and extracted on the basis of their molecular masses and constituent elements. Separation of drugs from the bloodstream. The removal of impurities and unknown compounds from the drugs as well as the estimation of drug sample purity can be analyzed using the chromatography technique.

Chromatography is a technique used to affect the separation of two or more dissolved solids contained within a solution in very small quantities. In Greek, the word ‘chroma’ means colour and ‘graphein’ is used to indicate writing. Initially, the technique was used for the separation of colors.

Question 2: What do you mean by Rf value in Chromatography?

Retention factor (Rf) refers to how far a fluid substance goes up a chromatography plate in paper chromatography. All chemicals have a standard RF value for each specific solvent, and RF values are used to compare unknown samples to known compounds.

Question 3: What are some Applications of Chromatography?

Following are some important applications of Chromatography:

Paper chromatography has some limitations such as: