How to check if an instance of 8 puzzle is solvable?

Given a 3×3 board with 8 tiles (every tile has one number from 1 to 8) and one empty space. The objective is to place the numbers on tiles in order using the empty space. We can slide four adjacent (left, right, above and below) tiles into the empty space 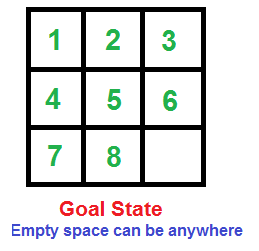 How to find if given state is solvable?

Following are two examples, the first example can reach goal state by a series of slides. The second example cannot. 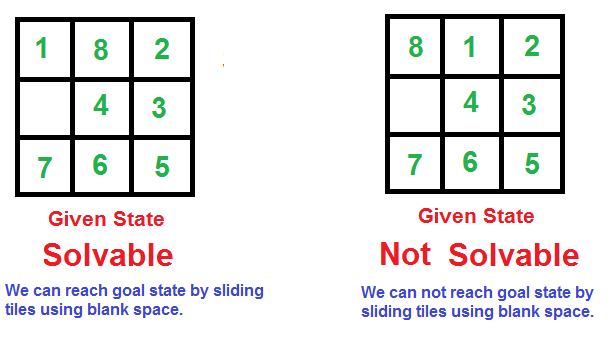 Following is simple rule to check if a 8 puzzle is solvable.

It is not possible to solve an instance of 8 puzzle if number of inversions is odd in the input state.

A pair of tiles form an inversion if the values on tiles are in reverse order of their appearance in goal state. For example, the following instance of 8 puzzle has two inversions, (8, 6) and (8, 7).

Following are the implementations to check whether a given instance of 8 puzzle is solvable or not. The idea is simple, we count inversions in the given 8 puzzle.

How does this work?

b) A column move does one of the following three.
…..(i) Increases inversion count by 2. See following example.

So if a move either increases/decreases inversion count by 2, or keeps the inversion count same, then it is not possible to change parity of a state by any sequence of row/column moves.

Exercise: How to check if a given instance of 15 puzzle is solvable or not. In a 15 puzzle, we have 4×4 board where 15 tiles have a number and one empty space. Note that the above simple rules of inversion count don’t directly work for 15 puzzle, the rules need to be modified for 15 puzzle.

Related Article: How to check if an instance of 15 puzzle is solvable?

This article is contributed by Ishan. Please write comments if you find anything incorrect, or you want to share more information about the topic discussed above