Given integers current_row and current_col, representing the current position of a Rook on an 8 X 8 chessboard and two more integers destination_row and destination_col which represents the position to be reached by a Rook. The task is to check if it is possible or not for a Rook to reach the given destination in a single move from its current position. If found to be true, print “POSSIBLE”. Otherwise, print “NOT POSSIBLE”. 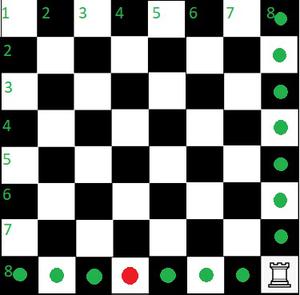 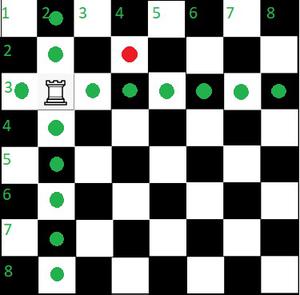 Approach: The given problem can be solved using the following observation:

On a chessboard, a rook can move as many squares as possible, horizontally as well as vertically, in a single move. Therefore, it can move to any position present in the same row or the column as in its initial position. 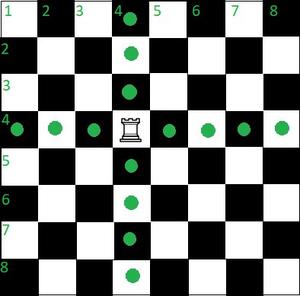 Therefore, the problem reduces to simply checking for the following two conditions:

My Personal Notes arrow_drop_up
Previous
Count indices where the maximum in the prefix array is less than that in the suffix array
Next
Minimize remaining array element by removing pairs and replacing them with their average
Recommended Articles
Page :
Minimum number of moves required to reach the destination by the king in a chess board
28, Nov 18
Check if all disks can be placed at a single rod based on given conditions
03, Feb 21
Check if quantities of 3 distinct colors can be converted to a single color by given merge-pair operations
07, Sep 20
Check if a destination is reachable from source with two movements allowed | Set 2
07, Sep 20
Count the total number of squares that can be visited by Bishop in one move
05, Feb 19
Number of blocks in a chessboard a knight can move to in exactly k moves
26, Nov 18
Number of cells a queen can move with obstacles on the chessborad
28, Jun 17
Check if an array can be split into K consecutive non-overlapping subarrays of length M consisting of single distinct element
12, Feb 21
Maximum index a pointer can reach in N steps by avoiding a given index B | Set 2
15, Mar 21
Shortest Path with even number of Edges from Source to Destination
31, May 20
Minimum edges to reverse to make path from a source to a destination
11, Nov 16
Total position where king can reach on a chessboard in exactly M moves | Set 2
26, Mar 19
Total position where king can reach on a chessboard in exactly M moves
30, Jan 19
Puzzle | Can a Knight reach bottom from top by visiting all squares
17, Apr 20
Check if it is possible to reach (X, Y) from (1, 1) by given steps
03, Nov 20
Minimize steps required to move all 1's in a matrix to a given index
24, Jun 20
Move all digits to the beginning of a given string
08, Feb 21
Match Expression where a single special character in pattern can match one or more characters
27, May 17
Check if it is possible to reach (x, y) from origin in exactly Z steps using only plus movements
09, Jul 20
Minimum cost required to move all elements to the same position
23, Nov 20
Find the winner of a game of donating i candies in every i-th move
08, Apr 21
Move all zeros to start and ones to end in an Array of random integers
18, Apr 19
Check whether it is possible to make both arrays equal by modifying a single element
13, Nov 18
Minimum time required to reach a given score
04, Dec 20
Article Contributed By :