Characteristics of the Compounds of Alkali Metals

There are a large number of elements around us having different properties and different uses based on those properties. For using these elements, properties are important so there should be some table to group these elements. This table is known as a periodic table which is created by using the work of different scientists. Elements of the first group are called Alkali metals. This group contains the following elements lithium, sodium, potassium, rubidium, Caesium and Francium. Apart from lithium, all other elements follow a similar trend in chemical and physical properties. 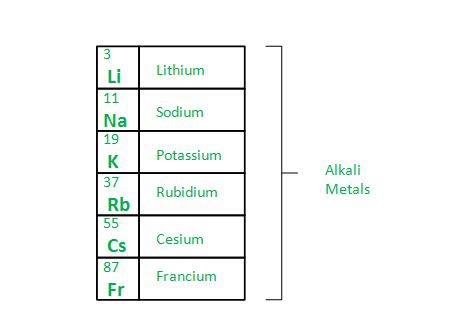 where X is a halogen and M is alkali metal

Apart from hydroxides, peroxides can also be formed.

Compounds of alkali metals react with the halogen group which consists of fluorine, chlorine, bromine and iodine to form corresponding halides. These halides have high melting points and are colourless.

The alkali metals have the ability to form salts with the oxo-acid group, so let’s understand what is an oxoacid. Oxo-acids can be defined as those which has acidic proton attached to the hydroxyl group along with the oxo group. Examples are sulphuric acid and carbonic acid. Following are the properties of Oxo-acids:

Question 1: Explain the reaction of alkali metals with oxygen?

Alkali metals react violently with oxygen and forms oxides, peroxides and superoxides depending on the metal and its size. As superoxides are generally unstable because of small cation but with large cation it will be stable.

Question 2: Why lithium carbonate is not stable to heat?

Question 3: How alkali metals can be tested?

Question 4: Why caesium and potassium are used in photoelectric cells?

Caesium and Potassium have a special ability to lose electrons by absorbing energy from sunlight when light rays fall on these elements and this results in a photoelectric effect due to which caesium and potassium are used as electrodes in photoelectric cells.

Question 5: What is the oxidation state of Potassium in Potassium oxide?

Potassium reacts with oxygen to give potassium oxide as:

Potassium oxide is superoxide and the oxygen ion is represented as O–2 and hence the oxidation state of +1, this compound is neutral in nature.