A cell is a cytoplasmic mass that is outwardly bound by a cell membrane. Cells, which are typically tiny in size, are the smallest structural units of biological matter and comprise all living organisms. Most cells have one or more nuclei as well as other organelles that perform a range of functions. Some single cells, such as bacteria or yeast, are entire creatures. Others are multicellular creatures’ specialized building blocks, such as plants and animals.

A cell membrane is a thin semi-permeable membrane that surrounds and encloses a cell’s cytoplasm. The membrane also provides a cell structure and allows it to join to neighboring cells to form tissues. In certain animals, the cell membrane also acts as a basis of attachment for the cytoskeleton, whereas in others, it functions as the cell wall. As a result, it aids in cell support and shape maintenance. The cell membrane regulates the passage of substances into and out of cells by being selectively permeable to ions and organic molecules. The cell membrane’s primary role is to shield the cell from its environment.

The plasma membrane is another name for the cell membrane. It is the outside layer of animal cells. It is made up of lipids and proteins and is semi-permeable. The cell membrane’s primary roles are as follows:

The cell membrane is composed of two phospholipid-based layers. The bilayer is generated by arranging phospholipids such that their head regions (which are hydrophilic) face both the exterior and internal cytosolic environments. These phospholipids’ (hydrophobic) tails are facing each other. Electrostatic, van der Waals, non-covalent interactions, and hydrogen bonding are the forces that drive the development of this bilayer. This unusual configuration of hydrophilic and hydrophobic layers prevents nucleic acids, amino acids, proteins, carbohydrates, and ions from passing through the bilayer. The many components of the cell membrane are listed below.

These proteins are associated with the membrane’s surface via hydrogen bonds and electrostatic interactions. The hydrophilic phospholipid heads that compose the bilayer create the hydrogen bonds of these peripheral proteins. 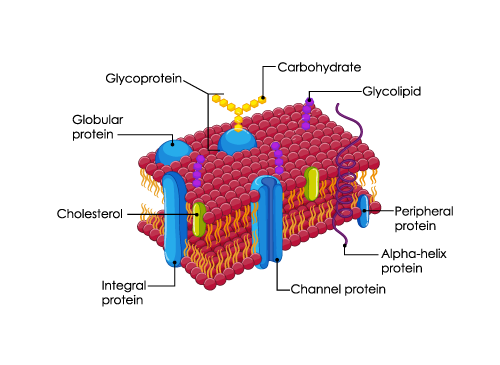 Glycolipids: Glycolipids are carbohydrate sugar chains that are linked to cell membrane surfaces. They assist the cell in recognizing other cells in the body.

Question 1: Write any three major functions of a cell wall.

Question 2: Where do chromosomes reside in a cell? Explain what they do?

They are situated in the cell’s nucleus, and each chromosome contains genes that are responsible for some attribute or characteristic. These genes pass these characteristics down from parents to kids.

Question 3: What is the cell membrane’s function?

Question 4: Which chemical is found in both the cell membrane and space?

Question 5: What do you mean by cytoplasm?

The cytoplasm is the live component of the protoplasm between the plasma membrane and the nucleus.

Question 6: What is the name of a cell’s boundary?