Causes, Effects and Control of Deforestation 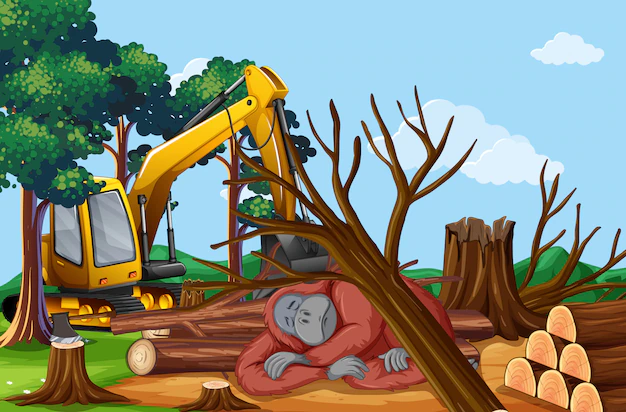 Why plants are important for a forest?

Plants are very important for human beings to take a breath. Human beings are living because of oxygen that oxygen is generated by the plants around the environment. In our environment plants takes carbon dioxide as intake from the leaves and give output as oxygen. Because oxygen is essential for humans plants are important to humans.

Deforestation is caused by the following concepts. They are

Urbanization includes making roads in forests so that trees in the forest are cut down. If the population is more there is a chance of cutting down the trees more for the sake of building and road etc.,

In this illegal logging cutting the trees for the sake of wood, coal that comes to form the trees is used for buildings construction and somewhat used for coal to sell for the industries. This cause the forest like deforestation. Wood is used for paper and various accessories.

People who live in forests need food for their living process. To live they used to cut down trees for growing food like grains, vegetables, etc., this makes the land lose its ability of afforestation.

Agricultural activities like overgrowing anywhere in the forest make the forest lose afforestation. People for the sake of food used forests to grow more and more without fertilizers.

Climate unbalances and climatic changes occur when forests are degraded. Plants are like lungs for the earth. The plant takes greenhouse gasses and releases oxygen and water vapor to make the environment moist. Plants also give shade to all living beings under the tree. If trees are degraded advantages because of plants are not perfectly done. That is why deforestation makes climatic unbalance and climatic changes.

Global warming means increasing the temperature of the earth because of unbalanced emission of gasses on the earth due to greenhouse gasses released by the different industries. If trees were there those gasses are absorbed by the plants else temperature increases because of the unwanted gasses.

Trees stores most of the water when there is heavy rain. If trees are cut for the wanted resources by the humans then water is flown to down areas causing floods to those areas.

Plants have the ability to stop soil from being joined with river water and making them pollute. If plants were there may be a chance of soil protection with the help of plant stem. The stem of the plant has the capacity to stop erosion by the roots.

If plants are degraded food for the animals as well as a human being are also degraded easily. Plant prepares food with the help of the photosynthesis process. Plants prepared food is used by the animals like goats, goats are eaten by lions when lions dead that are eaten by the eagles, and then the whole process repeats by the degradation of the body of eagles acts as manure for the plants.

Question 1: What is the major resource used by the humans from the forest? Explain.

Wood is the major resource used by humans. Wood is used for the construction of houses, paper, some wooden bowls, etc.,

Question 2: In which nation deforestation is very high compared to other nations?

Question 3. Differences between deforestation and afforestation?

Question 4. How many types of cutting for deforestation? What are they?

There are two types of cutting for deforestation. They are.

Question 5. Why trees are so important for the environment?. Explain.

Question 6: In which forests does deforestation happen mostly?