Resistor definition indicates that it is a basic component found in all electrical gadgets. The resistor is a two-terminal passive electrical component. According to its definition, the resistor is used to limit the passage of electric current in a circuit. Let’s take a closer look at what a carbon resistor is, its components, and its applications in this post.

A fixed form of a resistor is a carbon resistor. The resistor has been around for more than a century. Initially, resistors were manufactured without a coating. Wire wrapped and carbon composition resistors were the only types of resistors available.

Carbon resistors are resistors composed of tiny carbon fragments with a binder in a cylindrical shape and baked with terminal lead on the other end.

The bulk of these carbon composition resistors are constructed of metal or carbon films over a ceramic carrier, and they are frequently used in electrical circuits. The carbon resistor’s most important benefit is its capacity to withstand high-energy pulses. The whole body of the carbon resistor carries the energy for the electric current running through it. The carbon resistor comes in a variety of physical sizes with power dissipation limits ranging from 1 watt to 1/8 watt.

What is a Carbon Resistor?

To make the resistance, a variety of metals and alloys are utilized, including nichrome, brass, platinum, and tungsten. However, when compared to carbon resistors, most of these metals have low electrical resistance since it is difficult to create high resistance without making the resistor bulky. Resistance is known to be exactly proportional to the product of the resistor’s length and resistivity.

Carbon resistors are commonly used to calibrate resistance because they may give a high precision value of resistance. They are inexpensive, small, and maybe directly installed on circuit boards such as those used in tablets, smartphones, and laptop CPUs. Metal wires are more expensive to make than carbon, which is accessible in vast quantities, therefore they are chosen for all of these practical reasons.

The most often used symbol for a resistor in electrical and electronic circuit designs is a zig-zag line, with the value of its resistance indicated by the Ohms. Fixed resistors typically have only one resistance value. On the other hand, variable resistors can have an unlimited number of resistances ranging from zero to their maximum value.

Parts of a Carbon Resistor

The carbon resistor’s internal structure is seen in the diagram below. 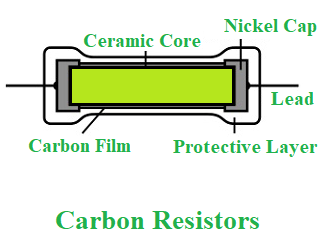 The deposition method is used to make the carbon resistors. The carbon layer is placed on the resistor’s ceramic body in this procedure. Because the carbon film inhibits the current flow, it is an essential component of the resistor. Hydrocarbons such as methane and benzene are shattered at a high temperature of 1000°C. Pure graphite (carbon) is utilized for distribution over the ceramic body, and the ceramic mould functions as an insulator against high temperatures or electricity.

Because of the carbon coating, the resistor can tolerate electricity without being damaged. The helical form of the carbon sheet aids in the precise resistance of this carbon resistor. The decrease in width and increase in length also enhances the resistor’s efficacy. An epoxy coating is also given for the resistor’s protection. As indicated in the diagram, metal is used for the end part, while copper is used for the connecting leads, which are attached to the metallic ends.

When building an electric or electronic circuit for a certain purpose, the exact amount of resistance in the circuit board must be induced. It is accomplished by using carbon resistors, which are small components. These components are a small packet of resistance that is connected to the circuit to limit the flow of current by a specific amount.

Carbon is deposited onto a ceramic core in the carbon resistor. The deposited carbon is etched in a spiral, which transforms it into a wire coiled on a ceramic core. The Pitch, diameter, and length of the carbon spiral vary depending on the resistance required. Nickel caps are connected to both ends of the core to ensure that the carbon and lead make excellent contact.

For electrical insulation, the leads are soldered to the nickel caps, and the entire resistor is coated with lacquer. Metal caps function as heat sinks for small resistances necessary for small currents, carrying away heat lost by the resistor. A metal heat sink is connected separately for greater current needs to take away excess heat and prevent the resistor from burning up.

The following are some of the applications for carbon resistors:

Problem 1: Define thermistors and their use.

A thermistor is a resistance thermometer or a resistor with temperature-dependent resistance. The name is derived from the words “thermal” and “resistor.” It’s formed of metallic oxides that have been crushed into a bead, disc, or cylindrical shape before being encased in an impermeable substance like epoxy or glass. The use of a thermistor is to convert electric voltage from temperature.

Problem 2: Define Rheostat and its use.

Problem 3: What is the tolerance value of Gold and Silver colour resistance?

Problem 4: What is the value of the resistor with colour bands brown, black and red?

Resistor colour coding employs coloured bands to readily identify a resistor’s resistive value and tolerance percentage, with the resistor’s physical size indicating its wattage rating. The resistor with the colour bands brown, black, and red has a value of 1000 ohms.

Problem 5: What is a carbon resistor?

Carbon resistor is a resistor composed of tiny carbon fragments with a binder in a cylindrical shape and baked with terminal lead on the other end. Ceramic core, Nickel Cap, Carbon film, Lead, and Protective epoxy layer are the parts of a carbon resistor.