Calculate area of a cyclic quadrilateral with given side lengths 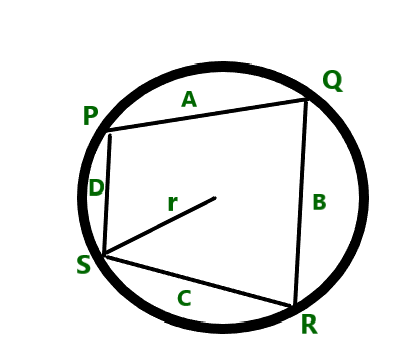 where, A, B, C, and D are the sides of the triangle and
α and γ are the opposite angles of the quadrilateral.

Therefore, the formula for finding the area reduces to

Therefore, the idea is to print the value of

as the resultant area of the given quadrilateral.

My Personal Notes arrow_drop_up
Previous
Class 11 RD Sharma Solutions - Chapter 9 Trigonometric Ratios of Multiple and Submultiple Angles - Exercise 9.2
Next
Convert a number to another by dividing by its factor or removing first occurrence of a digit from an array
Recommended Articles
Page :
Find interior angles for each side of a given Cyclic Quadrilateral
25, Mar 21
Exterior angle of a cyclic quadrilateral when the opposite interior angle is given
22, May 19
Length of Diagonals of a Cyclic Quadrilateral using the length of Sides.
14, Aug 20
Circumradius of a Cyclic Quadrilateral using the length of Sides
01, Sep 20
Theorem - The sum of opposite angles of a cyclic quadrilateral is 180° | Class 9 Maths
12, Dec 20
Area of Triangle using Side-Angle-Side (length of two sides and the included angle)
30, Jun 20
Program to calculate area of a rhombus whose one side and diagonal are given
10, Oct 19
Find the area of quadrilateral when diagonal and the perpendiculars to it from opposite vertices are given
13, Aug 19
Check if a right-angled triangle can be formed by the given side lengths
11, Nov 20
Maximum area of quadrilateral
08, Nov 17
Area of a Triangle from the given lengths of medians
30, Jun 20
Calculate Volume, Curved Surface Area and Total Surface Area Of Cylinder
16, Nov 17
Area of a n-sided regular polygon with given side length
31, Dec 18
Find the area of rhombus from given Angle and Side length
20, Aug 20
Check whether Quadrilateral is valid or not if angles are given
30, Jul 19
Maximize Perimeter of Quadrilateral formed by choosing sides from given Array
29, Nov 21
Find side of Square which makes minimal area to fit two identical rectangles inside it
09, Jul 20
Area of a Square | Using Side, Diagonal and Perimeter
25, Jul 20
Program to find the angles of a quadrilateral
25, Oct 18
Number of quadrilateral formed with N distinct points on circumference of Circle
12, Jun 20
Find initial sequence that produces a given Array by cyclic increments upto index P
30, Jun 20
Calculate area of pentagon with given diagonal
17, Dec 18
Program to calculate area and perimeter of a rhombus whose diagonals are given
14, Nov 18
Find area of the larger circle when radius of the smaller circle and difference in the area is given
30, Jul 19
Article Contributed By :