The term Neural Networks refers to the system of neurons either organic or artificial in nature. In artificial intelligence reference, neural networks are a set of algorithms that are designed to recognize a pattern like a human brain. They interpret sensory data through a kind of machine perception, labeling, or clustering raw input. The recognition is numerical, which is stored in vectors, into which all real-world data, be it images, sound, text, or time series, must be translated. A neural network can be pictured as a system that consists of a number of highly interconnected nodes, called ‘neurons’, which are organized in layers that process information using dynamic state responses to external inputs. Before understanding the working and architecture of neural networks, let us try to understand what artificial neurons actually are.

Perceptron: Perceptrons are a type of artificial neurons developed in the 1950s and 1960s by the scientist Frank Rosenbalt, inspired by earlier work by Warren McCulloch and Walter Pitts. So, how do perceptron works? A perceptron takes several binary outputs x1, x2, …., and produces a single binary output.

It could have more or fewer inputs. To calculate/compute the output weights play an important role. Weights w1, w2, …., are real numbers expressing the importance of the respective inputs to the outputs. The neuron’s output(o or 1) totally depends upon a threshold value and is computed according to the function:

Here t0 is the threshold value. It is a real number which is a parameter of the neuron. That’s the basic mathematical model. The perceptron is that it’s a device that makes decisions by weighing up the evidence. By varying the weights and the threshold, we can get different models of decision-making.

Sigmoid Neurons: Sigmoid neurons are very much closer to perceptrons, but modified so that small changes in their weights and bias cause only a small change in their output. It will allow a network of sigmoid neurons to learn more efficiently. Just like a perceptron, the sigmoid neuron has inputs, x1, x2, …. But instead of being just 0 or 1, these inputs can also be any value between 0 and 1. So, for instance, 0.567… is a valid input for a sigmoid neuron. A sigmoid neuron also has weights for each input, w1, w2, …, and an overall bias, b. But the output is not 0 or 1. Instead, it’s σ(w.x + b), where σ is called the sigmoid function:

The Architecture of Neural Networks 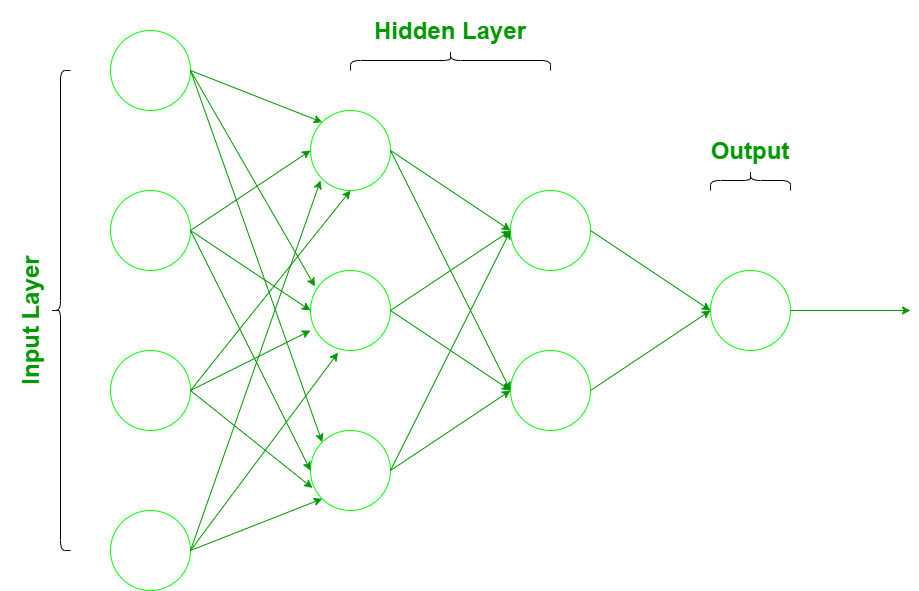 The input data is introduced to the neural network through the input layer that has one neuron for each component present in the input data and is communicated to hidden layers(one or more) present in the network. It is called ‘hidden’ only because they do not constitute the input or output layer. In the hidden layers, all the processing actually happens through a system of connections characterized by weights and biases(as discussed earlier). Once the input is received, the neuron calculates a weighted sum adding also the bias and according to the result and an activation function (the most common one is sigmoid), it decides whether it should be ‘fired’ or ‘activated’. Then, the neuron transmits the information downstream to other connected neurons in a process called ‘forward pass’. At the end of this process, the last hidden layer is linked to the output layer which has one neuron for each possible desired output.

It is very much easier to implement a neural network by using the R language because of its excellent libraries inside it. Before implementing a neural network in R let’s understand the structure of the data first.

Understanding the structure of the data

Here let’s use the binary datasets. The objective is to predict whether a candidate will get admitted to a university with variables such as gre, gpa, and rank. The R script is provided side by side and is commented for better understanding of the user. The data is in .csv format. We will get the working directory with getwd() function and place out datasets binary.csv inside it to proceed further. Please download the csv file here.

Looking at the structure of the datasets we can observe that it has 4 variables, where admit tells whether a candidate will get admitted or not admitted (1 if admitted and 0 if not admitted) gre, gpa and rank give the candidates gre score, his/her gpa in the previous college and previous college rank respectively.   We use admit as the dependent variable and gre, gpa, and rank as the independent variables. Now understand the whole process in a stepwise manner

Step 1: Scaling of the data

From the above histogram of gre we can see that the gre varies from 200 to 800.  We invoke the following function to normalize our data:

From the above representation we can see that gre data is scaled in the range of 0 to 1. Similar we do for gpa and rank.

It can be seen from the above two histogram representation that gpa and rank are also scaled in the range of 0 to 1. The scaled data is used to fit the neural network.

Step 2: Sampling of the data

Now divide the data into a training set and test set. The training set is used to find the relationship between dependent and independent variables while the test set analyses the performance of the model. We use 60% of the dataset as a training set. The assignment of the data to training and test set is done using random sampling. We perform random sampling on R using sample() function. Use set.seed()to generate same random sample every time and  maintain consistency. Use the index variable while fitting neural network to create training and test data sets. The R script is as follows:

From the above output we conclude that both of the repetitions converge. But we will use the output-driven in the first repetition because it gives less error(139.80883) than the error(147.41304) the second repetition derives. Now, lets plot our neural network and   visualize the computed neural network. 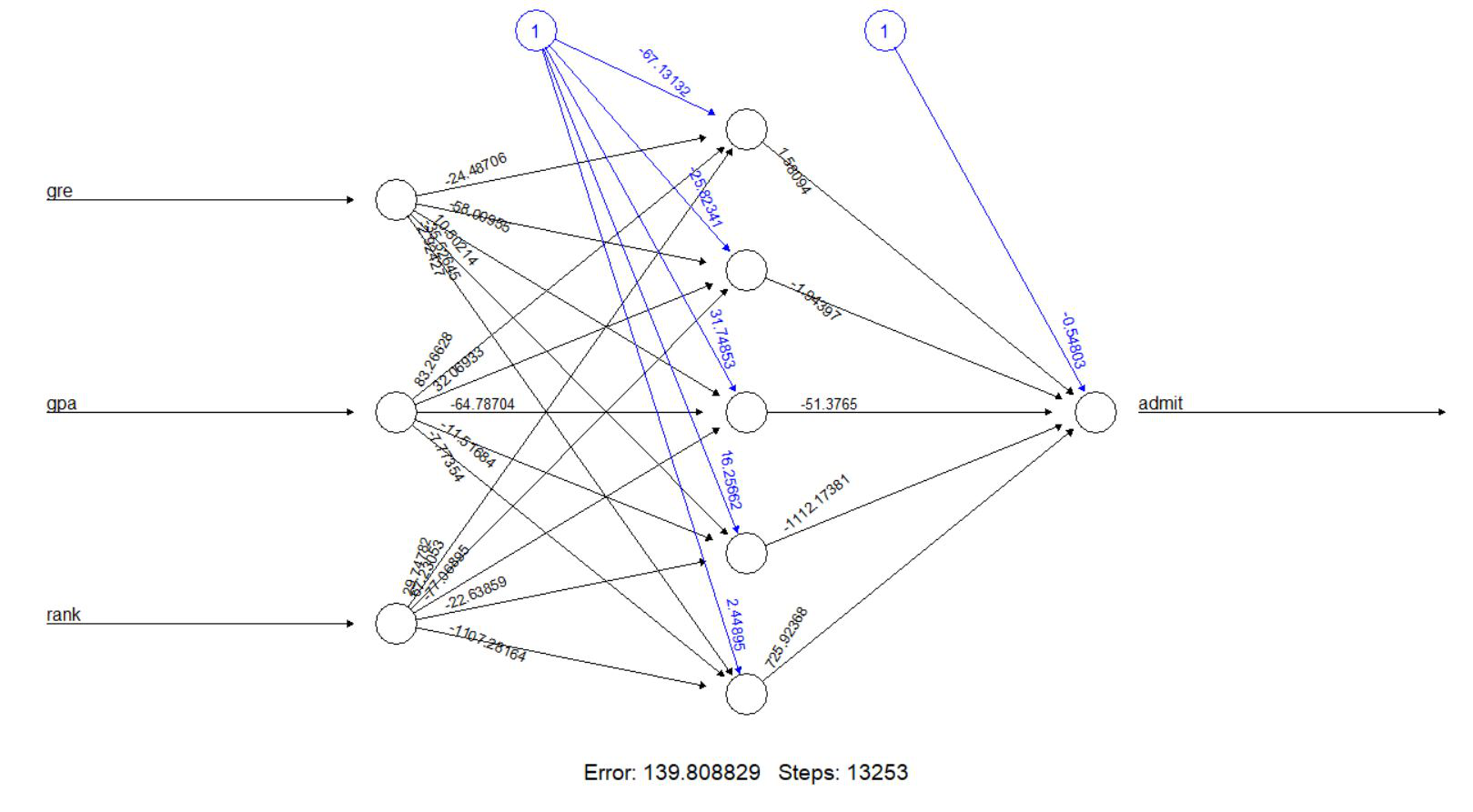 The model has 5 neurons in its hidden layer. The black lines show the connections with weights. The weights are calculated using the backpropagation algorithm. The blue line is displays the bias term (constant in a regression equation). Now generate the error of the neural network model, along with the weights between the inputs, hidden layers, and outputs:

The misclassification error comes out to be 24.9%. We can further increase the accuracy and efficiency of our model by increasing of decreasing nodes and bias in hidden layers .

The strength of machine learning algorithms lies in their ability to learn and improve every time in predicting an output. In the context of neural networks, it implies that the weights and biases that define the connection between neurons become more precise. This is why the weights and biases are selected such as the output from the network approximates the real value for all the training inputs. Similarly, we can make more efficient neural network models in R to predict and drive decisions.