Given a binary string str, the task is to build a DFA that accepts given binary string if it contains “01” i times and “1” 2j times, i.e.,

DFA or Deterministic Finite Automata is a finite state machine which accepts a string(under some specific condition) if it reaches a final state, otherwise rejects it.
In DFA, there is no concept of memory, therefore we have to check the string character by character, beginning with the 0th character. The input set of characters for the problem is {0, 1}. For a DFA to be valid, there must a transition rule defined for each symbol of the input set at every state to a valid state. Therefore, the following steps are followed to design the DFA:

Step by Step Approach to design a DFA: 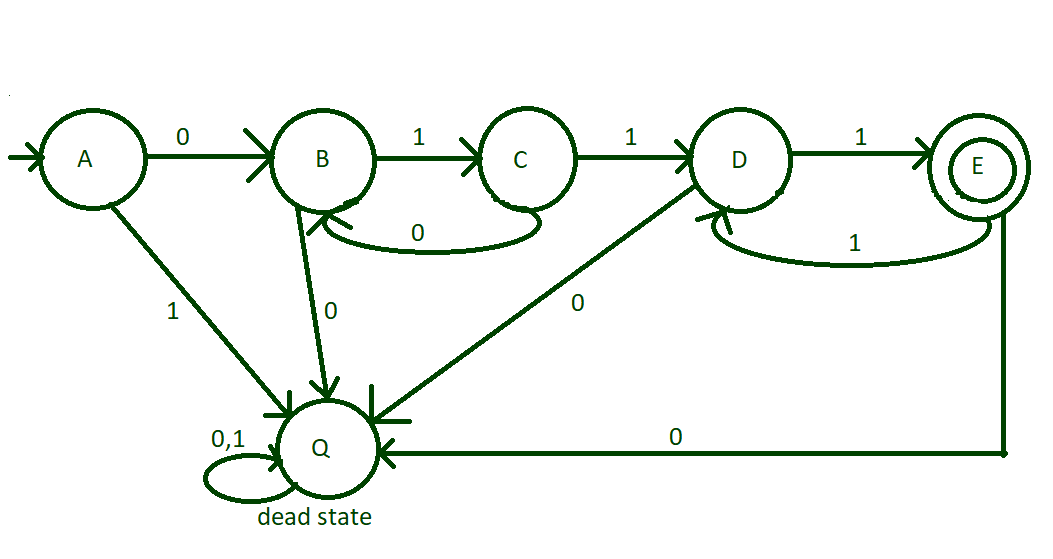 My Personal Notes arrow_drop_up
Previous
Count pair of strings whose concatenation of substrings form a palindrome
Next
Count of subsequences in an array with sum less than or equal to X
Recommended Articles
Page :
String obtained by reversing and complementing a Binary string K times
09, Apr 20
Longest sub string of 0's in a binary string which is repeated K times
17, Jul 19
Build a DFA to accept Binary strings that starts or ends with "01"
10, Jun 20
Convert a Binary String to another by flipping prefixes minimum number of times
09, Mar 21
Count binary strings with k times appearing adjacent two set bits
20, Feb 17
Largest sub-string where all the characters appear at least K times
07, Jun 19
Count of Binary strings of length N having atmost M consecutive 1s or 0s alternatively exactly K times
12, May 20
Number of times the given string occurs in the array in the range [l, r]
22, Apr 19
Program to build a DFA to accept strings that start and end with same character
14, Feb 20
Largest substring where all characters appear at least K times | Set 2
23, Jun 20
Count of numbers appearing in the given ranges at-least K times
31, Aug 18
NFA for language at least one of the symbols occurring an odd number of times
25, Jul 20
Count distinct substrings that contain some characters at most k times
08, Jan 19
Count of Numbers in a Range where digit d occurs exactly K times
27, Dec 18
Find the K-th minimum element from an array concatenated M times
06, Mar 19
Number of times Maximum and minimum value updated during traversal of array
07, May 20
Longest increasing sub-sequence formed by concatenating array to itself N times
18, Mar 20
Count how many times the given digital clock shows identical digits
12, Mar 19
Program to build a DFA that checks if a string ends with "01" or "10"
07, Feb 20
Maximum subarray sum in array formed by repeating the given array k times
24, Jan 19
Periodic Binary String With Minimum Period and a Given Binary String as Subsequence.
27, Apr 20
Minimum number whose binary form is not a subsequence of given binary string
16, Jun 21
Check if binary representations of 0 to N are present as substrings in given binary string
23, Jul 20
Most frequent character in a string after replacing all occurrences of X in a Binary String
19, Feb 21
Article Contributed By :