, whereby Rn and Rm represent decision space and objective space respectively. The fitness value or fitness value vector in the target area are connected to each solution in the field of decision.

You can see a minimum optimization problem as follows:

where f() is the objective function,

is the variable vector to be optimized,

are the constraints. The evaluation function in optimization, f(x), maps decision variables to objective vectors. Depending upon the value of m, optimization problems are of two types: single objective (m=1) and multi objective (m>1). 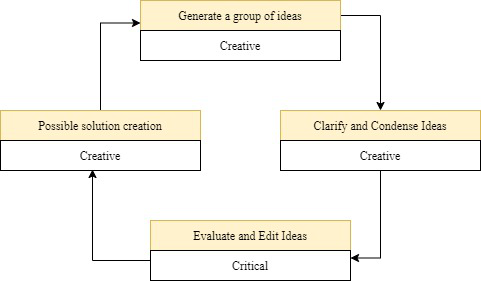 The above figure shows the steps of the brainstorming process. The first step in this process is coming up with rough ideas and grouping them together. After one has raw ideas, the process of clarifying and condensing those ideas into a bunch of sensible and refined ideas comes into being. Both steps fall into the category of creative. In the third step,  one decides the evaluation of the refined ideas and makes the necessary changes required. The last step in the brainstorming process is creating a possible solution out of the sensible, evaluated ideas. The conclusion of this process can be either the solution works or it doesn’t. The latter triggers the same process all over again.

Osborn provided rules for Idea Generation in a Brainstorming Process:

NOTE: A cluster centre is more likely to generate new ideas than in any cluster

Many real-world applications could be modelled as optimization problems. As an outstanding swarm intelligence algorithm, brainstorm optimization has been widely used to solve enormous real-world problems.