Boron is a chemical element that exists in both crystalline and amorphous forms. It bears the symbol B and atomic number 5 with an atomic weight of 10.81amu. The amorphous form of Boron is powerful in form with brown color and in its crystalline state, it is shiny and dark. Turkey is the largest producer of Boron in the world.

Sodium borate or Sodium borate decahydrate or Sodium tetraborate decahydrate which is popularly known as Borax is widely known for it’s antifungal or fungus prevention usage.Borax is basically a hydrate salt of boric acid. Borax is generally referred to few crystals and has different chemical formulae depending upon the water of crystallization. Borax is has wide range of uses ,it is used as a co-complexing agent, fungicide and water softening agent. 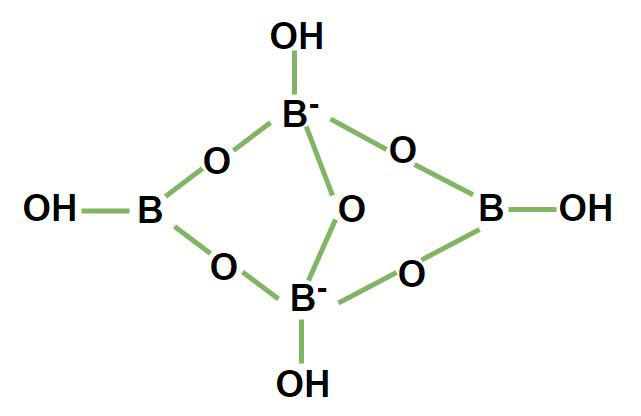 Repeated evaporation in seasonal lakes leads to the natural occurrence of borax. It was first discovered in dry lake beds of Tibet and was imported to Arabian estates.

Borax is prepared from colemanite (Ca2B6O11). The reaction involved is as follows,

Further we need to treat NaBO2(Sodium metaborate) with carbon dioxide in order to convert it to borax and the reaction involved is as follows,

Question 4: What is the resulting product formed when Borax reacts with Sodium hydroxide?

Sodium tetrahydroxyborate is formed when Borax reacts with NaOH (Sodium hydroxide). The reaction involved is as follows,

Question 5: List the various chemical formulae of Borax based on water of crystallization?

Hardness of water is mainly caused due to the Ca+2, Mg+2 cations. Borax reacts with these cations and forms precipitate which can be separated out easily and hence water becomes soft. The reaction involved in softening process is as follows:

Question 7: List the safety measures to be followed while using borax to avoid risks?