Grid Classes: The Bootstrap grid system has four classes that can be combined to make more flexible layouts:

Note: Output can be little difference as shown, it depend on your screen size.

Remember we can use all the grid classes (xs, sm, md, lg and xl) for different screen sizes.

But, we would face a major problem in this case. Notice that for devices like mobiles portrait(xs) and landscape(sm), the columns would stack upon one another. If we want our columns to stay in the same row, no matter what the size of the device is, then we must use xs. But then, sometimes it looks ugly.

So, we can build even more dynamic and powerful layouts with using more than one choice for columns. Let’s say we define the attributes for 4 columns as shown below.

What this means is: 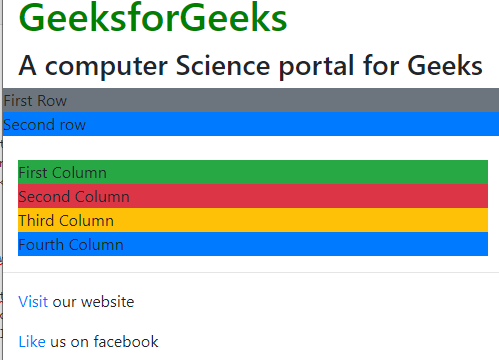 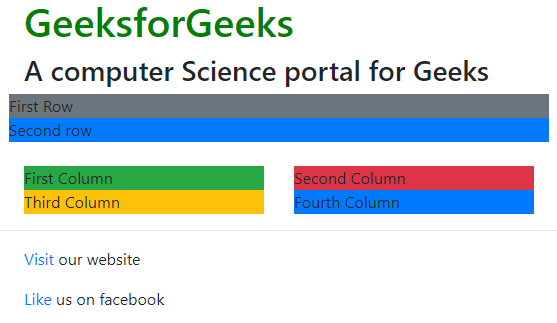 Column Resets: With the four tiers of grids available, we are bound to run into issues where at certain breakpoints, the columns don’t quite clear right as one is taller( has more text) than the other column. A command called clearfix is there which fixes any issues regarding that viewport. We just need to write a div command with class clearfix after the block where the column isn’t clearing right.

Let’s say we have an issue  with the md and sm viewport. But if we are using

But then it is causing problems  for other viewport (maybe lg and xs) . So, what we can do is make clearfix visible only for the md and sm block or hide all other blocks (lg and xs).

Columns Offset: We can move the columns to the right by x columns using  col-md-offset-x in the class.

This change results in making an offset of 2 grid columns before the fourth column.

Nesting Columns: For nesting columns within a column, we need to add a new row and set of columns. Nested rows should include a set of columns that add up to 12 or less than that.