Binomial expression is an algebraic expression with two terms only, e.g. 4x2+9. When such terms are needed to expand to any large power or index say n, then it requires a method to solve it.

Binomial Theorem is used to solve binomial expressions in a simple way. It gives an expression to calculate the expansion of (a+b)n for any positive integer n. The Binomial theorem is stated as:

Now, as it is understood that what is a binomial expression and the purpose of the binomial theorem, so try to expand (a+b)n for large values of n (e.g. n = 10. 11, 12,…) using the above statement as:

In case of the expansion of smaller powers, it is difficult to calculate the coefficients of the binomial expansion using the same statement. This drawback of the binomial theorem is resolved by Pascal’s Triangle.

The Pascal Triangle is an alternative method of the calculation of coefficients that come in binomial expansions, using a diagram rather than algebraic methods.

In the diagram shown below, it is noticed that each number in the triangle is the sum of the two directly above it. This pattern continues indefinitely to obtain coefficients of any index of the binomial expression. 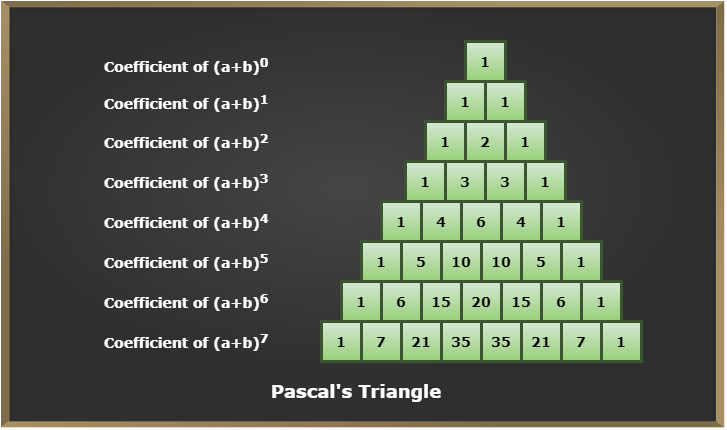 In this way the expansion from (a + b)0 to (a + b)7 are obtained by the application of Pascal’s Triangle. But finding (a + b)15 is really a long process using Pascal’s triangle. So, here is where the binomial theorem comes into the picture.

When the coefficients are observed closely theorem become as follows:

So from the above pattern, the expansion of (a + b)n becomes as follows:

The above statement is called Binomial Theorem.

Some examples on the above formula are as follows:

Properties of the Binomial Theorem

Let’s try some sample problems on the binomial theorem.

i.e., 6th term from the beginning, which is given by

Since the power of binomial is odd. Therefore, we have two middle terms

which are 5th and 6th terms. These are given by