Binary Synchronous Communication (BISYNC) is basically a character or byte-oriented form of communication which means that the groups of bits or bytes are the important elements of transmission rather than a stream of bits. BISYNC was established or originated by IBM in 1960’s. It generally includes characters and procedures for simply controlling the establishment or development of a valid connection and transmission of data. It is a half-duplex link protocol that has replaced the Synchronous transmit-receive (STR) protocol usually used with second-generation computers.

It is also known as Basic Mode Protocol that is required for transmission of bit-oriented data basically known as transparent mode. It is also being replaced largely by much more efficient protocol of IBM i.e. Synchronous Data Link Control (SDLC) that is usually under SAN (Systems Network Architecture). BSC or BISYNC also used to describe various types of data packets as given below :

Types of Frames :
There are basically two types of BSC or BISYNC frames as shown below :

1. Control Frame :
These frames are basically required for exchange of information or data among devices to develop or obtain initial connection, provide flow and error control, and also disconnect the devices when the session is completely over. This frame does not contain any header. 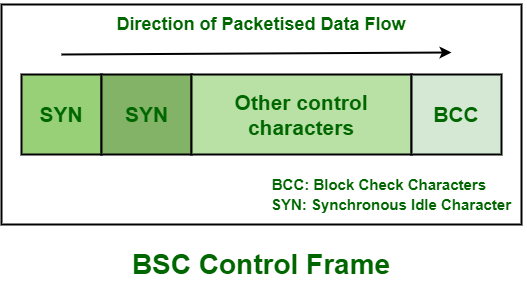 2. Data Frame :
These frames are basically required to carry user data. It is also used to show the direction of data transfer. BISYNC allows for two types of block messages i.e. Single-block and multiple-block message. The only difference in both of these blocks is that data in single-block messages would be terminated with ETB (End of Transmission Block) character rather than an ETX (End of Text) character.

Control Characters for BISYNC :
Some of the Standard Control Protocols that are used in BISYNC frames are given below :