Binary Decision Diagram (BDD) is an effective way to represent the Switching function. It is a Data-Structure used to represent a Boolean Function and can be represented as a compressed form of sets or relations.

A BDD is a set of an Acyclic, Rooted Graph with Directed Edges(Top-to-Bottom), which consist of Decision Node and 2-Terminal Nodes and have a special Node Called ROOT.

A binary decision diagram is a rooted, directed, acyclic graph. Nonterminal nodes in such a graph are called decision nodes; each decision node is labeled by a Boolean variable and has two child nodes, referred to as low child and high child.

BDD is a Shannon cofactor tree: 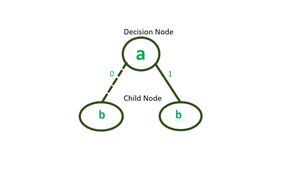 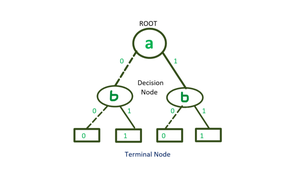 A BDD is said to be Ordered if different variables appear in the same order on all paths from the root.

A three-variable function is represented by Truth-table and BDD.

Step -1: Decomposing the function with respect to variable a

Step – 2: Decomposing the functions with respect to variable b-

Step – 3: Decomposing the functions with respect to variable c-

Note: Here order of variables is a, b, c. But we can take variables in any order. 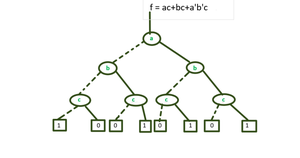 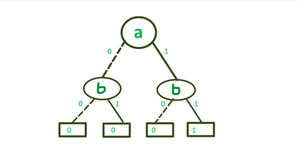 In mathematical notation, we usually write a ∧ b.

In the diagram above for a ∧ b, we indicate the 0 (left) branch with a dashed line and the 1 (right) branch with a solid line. This convention will make it easier to draw diagrams without a lot of intersecting lines. 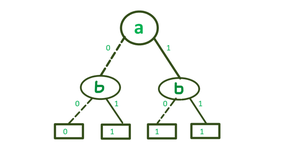 In mathematical notation, we usually write a ∨ b.

Exclusive or, which is mathematically often written as a⊕ b.

The size of BDD is determined both by the function being represented and the chosen ordering of the variables.

For some functions, the size of a BDD may vary between a linear to an exponential range depending upon the ordering of the variables.