Best Tech Movies That Every Programmer Must Watch

Every individual takes their life similar to movie fantasies. Every Programmer always loves to see their professional life from the perspective of movies. We all know that Hollywood is well-known for showing the best application of Artificial Intelligence perfectly. Therefore let us take a note to the best movies that every programmer should watch. 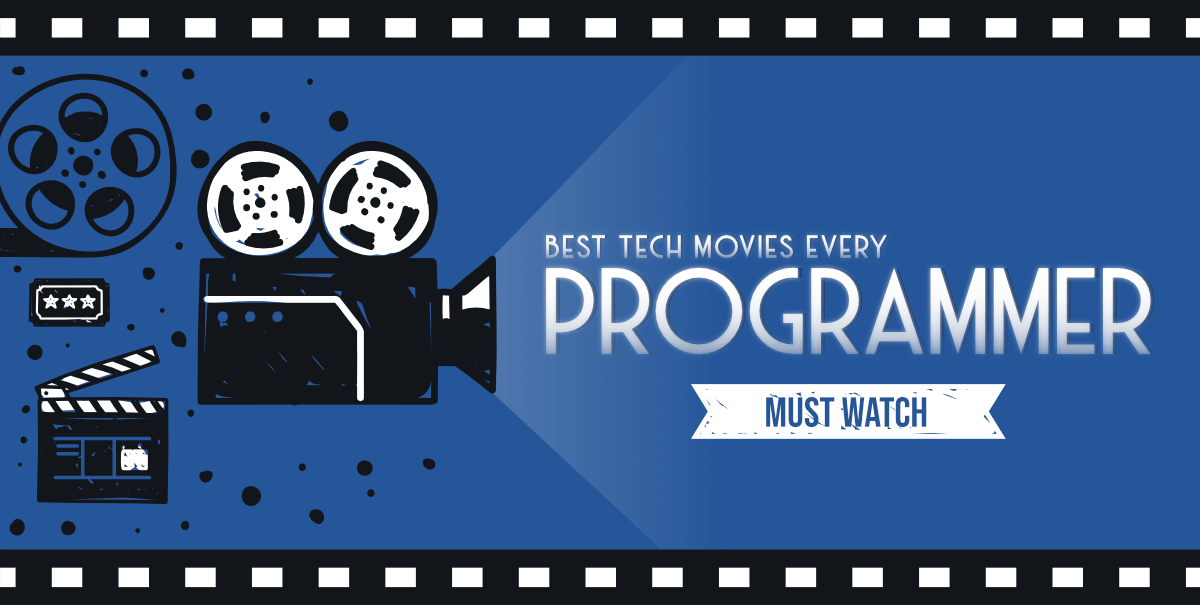 The movie is released in 1982. It is a science fiction action-adventure film. The direction was by Steven Lisberger from a story by Lisberger and starred by Jeff Bridges as a computer programmer. The Movie shows how Jeff Bridges get sucked in the computer world and tries to escape from there by interacting with the computer world. At last, he manages to get skipped from this computer world and return to the normal world by applying his knowledge. This turns out to be the best movie to watch for the programmers as it teaches us to apply our tech knowledge in different situations.

The movie is released in 1995. It is directed by Iain Softley and starring Jonny Lee Miller. This movie was released when the usage of the internet was not famous. The movie shows how few high school student uses their tech knowledge for corporate extortion. The movies got mixed reviews from critics but it was a masterpiece for programmer and security enthusiasts.

3. The Pirates of Silicon Valley

The movie was released in 1999. It was a biographical drama film. The direction was by Martyn Burke and starring Noah Wyle as Steve Jobs and Anthony Michael Hall as Bill Gates. This movie tells us how the great software companies “Apple” and “Mircosoft” become so successful. The main idea of these movies is how the creator of “Apple”, Steve Jobs, and the creator of “Microsoft’, the Bill Gates came up with the idea of personal computing that can be used by everyone.

The Movie begins with the IBM in early 1980s. At that time the IBM was unbeatable in the field of computing. And at that time the Steve Jobs set up their own company named “Apple” and started making computers in the garage. Ultimately the movie shows the ideology and methodology both of them used for making the line of the computer and now they are one of the top software companies in the world.

It was released in 2001. It is a techno-thriller film. The direction is by Peter Howitt. If you want to know about the dirty side of the software world than this movie is best recommended. The film frame the ideal programmers working in a corporation company providing a significant salary and informal working environment. A young talent programmer gets the job in the organization but later find out that something is wrong there.
The programmer then uses his tech skills and find out the issue. This movie is an all-time favorite for the programmers as it shows the best way of applying your tech knowledge.

The movie was released in 2010. It is a biographical drama film. The direction was by David Fincher and starred by Jesse Eisenberg as founder Mark Zuckerberg, along with Andrew Garfield as Eduardo Saverin. This Movie shows the true story of Facebook and Mark Zuckerberg.
The Movie is all about the challenges faced by Mark Zuckerberg while building the world’s most popular and highly used social networking site “Facebook”. Any programmer will love to watch this movie as it shows a clear dedication to achieving one’s goals.

The movie was released in 2013. It is a comedy film. The direction was by Shawn Levy, written by Vince Vaughn and stars Vince Vaughn and Owen Wilson. It shows how recently these gentlemen as laid-off salesmen who attempt to finish with much younger age and more technically skilled applicants for a job at Google.

They were invited to join the google internship at Google’s Headquarters in Mountain View California. And there they compete with the younger group of people who are tech genius and skilled. This is the best-recommended movie for those who think that they are too old for learning technical stuff.

The movie is released in 2013. It is a biographical drama film. The direction was by Joshua Michael Stern and star Ashton Kutcher as Steve Jobs the founder of the largest software company “Apple”. The film is based on the life of Steve Jobs from his school life until the invention of the iPod. As Steve Jobs has been an inspiration to the programmers all over the world, this movie is indeed inspirational. The movie not only shows the success story of Jobs but also shows the vision and motivation of jobs to change the world.

The movie was released in 2014. It is a historical drama film. The direction was by Morten Tyldum and written by Graham Moore, based on the 1983 biography Alan Turing: The Enigma by Andrew Hodges. This movie the invention of the world’s very first computer by Alan Turing and his team.
At the end of the movie, it is shown Alan and his team come up with a way to decode the German Enigma Code. It can turn out to be the best movie for programmers.

The Movie was released in 2014. It is a science fiction psychological thriller film. The direction was by Alex Garland. The movie shows a lot of applications of technology like artificial intelligence on mankind to have a better life. The story reloves around the programmer who is invited by his CEO to an intelligent humanoid robot. It shows the struggle of the programmers in the software world and the harmful effects on society if this technology is not used properly.

My Personal Notes arrow_drop_up
Recommended Articles
Page :
7 Must-Watch Web Shows for Tech Geeks
27, Nov 20
Top 10 Books That Every Programmer Must Read Once
13, Jun 20
Android Launcher Apps Users Must Watch
01, Feb 16
5 New Resolutions Every Novice Programmer Should Take in 2020
02, Jan 20
Programming For Beginners: 10 Best HTML Coding Practices You Must Know
17, Dec 19
5 GitHub Repositories that Every New Developer Must Follow
24, Jun 19
5 Mistakes That Every Engineering Student Must Avoid
05, Sep 19
7 Common Programming Principles That Every Developer Must Follow
14, Oct 19
7 Common Programming Mistakes That Every Beginner Must Avoid
27, Oct 19
Top 7 Payment Gateway APIs That Every Developer Must Know
18, Mar 20
Top 10 Tools That Every Web Developer Must Try Once
07, Jun 20
10 Must-Have Skills For Every Project Manager in 2020
06, Sep 20
How to be a Good Programmer in College ?
29, Mar 20
How do I become a good Java programmer?
12, Sep 18
Computer scientist vs Programmer vs Developer vs Hackers
24, Oct 18
How to be a Successful Freelance Programmer
23, Mar 19
4 Personality Traits of a Great Programmer
28, Feb 20
Why You Should Become a Self-Taught Programmer?
04, Mar 20
How to Think Like a Programmer?
26, Mar 20
How to Become a Freelance Programmer in 2020?
30, Apr 20
What Makes You a Good Programmer?
10, Sep 20
7 React Best Practices Every Web Developer Should Follow
25, May 20
8 Best Android Libraries That Every Android Developer Should Know
05, Nov 20
[TopTalent.in] How Tech companies Like Their Résumés
06, Nov 12
first_page Previous
Polling and Streaming - Concept & Scenarios
Next last_page
Expressions and Macros in Julia
Article Contributed By :