Docker Networking allows you to create a Network of Docker Containers managed by a master node called the manager. Containers inside the Docker Network can talk to each other by sharing packets of information. In this article, we will discuss some basic commands that would help you get started with Docker Networking. 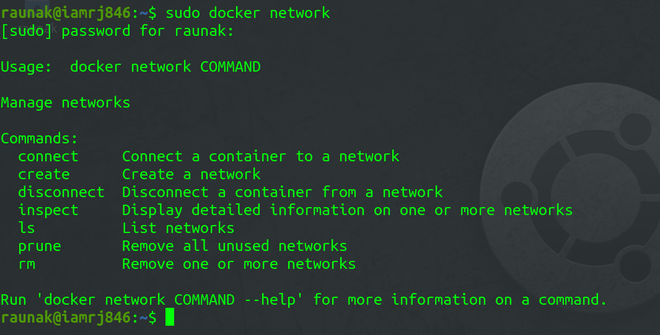 We will see all the Network sub-commands one by one.

The Create sub-command allows you to create a Docker Network.

Using Connect sub-command, you can connect a running Docker Container to an existing Network.

In this example, we will connect an Ubuntu Container to the Bridge Network we created in the last step.

Using the Network Inspect command, you can find out the details of a Docker Network.

You can also find the list of Containers that are connected to the Network.

The disconnect sub-command can be used to remove a Container from the Network.

You can remove a Docker Network using the rm sub-command.

Note that if you want to remove a network, you need to make sure that no container is currently referencing the network.

To remove all the unused Docker Networks, you can use the prune sub-command.