Data Mining: Data mining in general terms means mining or digging deep into data that is in different forms to gain patterns, and to gain knowledge on that pattern. In the process of data mining, large data sets are first sorted, then patterns are identified and relationships are established to perform data analysis and solve problems.

Classification: It is a data analysis task, i.e. the process of finding a model that describes and distinguishes data classes and concepts. Classification is the problem of identifying to which of a set of categories (subpopulations), a new observation belongs to, on the basis of a training set of data containing observations and whose categories membership is known.

Example: Before starting any project, we need to check its feasibility. In this case, a classifier is required to predict class labels such as ‘Safe’ and ‘Risky’ for adopting the Project and to further approve it. It is a two-step process such as: 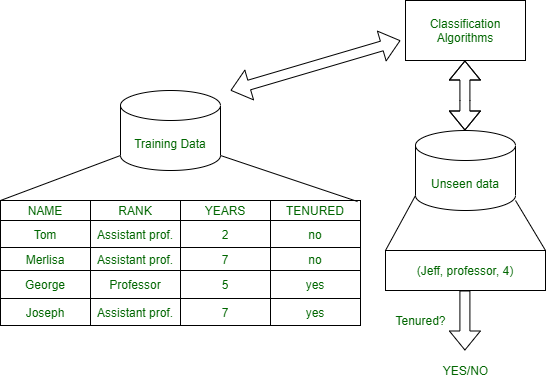 Suppose there is a person who is sitting under a fan and the fan starts falling on him, he should get aside in order not to get hurt. So, this is his training part to move away. While Testing if the person sees any heavy object coming towards him or falling on him and moves aside then the system is tested positively and if the person does not move aside then the system is negatively tested.
The same is the case with the data, it should be trained in order to get the accurate and best results.

There are certain data types associated with data mining that actually tells us the format of the file (whether it is in text format or in numerical format).

Attributes – Represents different features of an object. Different types of attributes are:

Now, the training set is given to a learning algorithm, which derives a classifier. Then the classifier is tested with the test set, where all class values are hidden.
If the classifier classifies most cases in the test set correctly, it can be assumed that it works accurately also on the future data else it may be the wrong model chosen.