BASH Alias is a shortcut to run commands using some mapping. It is a way to create some shortcut commands for repetitive and multiple tasks. We create an alias in a BASH environment in specified files. We can also incorporate BASH functions, variables, etc to make the Alias more programmatic and flexible.

What is a BASH Alias?

A BASH Alias is a map of commands with the sets of commands or functions that can be used as a shortcut in the command line for a BASH environment. Bash Alias allows to aggregate multiple functions into a single command and also it avoids repetitive or large commands into a simple shortcut command. BASH Alias is a map of shortcut command with the sets of commands which are stored in a file called either .bash_profile or .bashrc with a specific syntax. The aliases can also be combined with the BASH syntax and semantics to make the shortcuts more customizable and flexible.

Working of an Alias

The alias keyword replaces the command with the string which might be sets of commands or functions. The alias is defined in the ~/.bashrc or ~/.bash_profile. These files are loaded in the shell environment and thus the commands listed in the alias are also been loaded and ready to be executed. Thus, the alias work with the BASH configuration.

After the aliases or command maps have been loaded, the user can interact and enter the commands. If the command in the alias is executed the BASH interpreter replaces the command alias with the string of commands and hence the desired functioning of the alias or command is achieved.

We’ll see how to create a BASH Alias in the next section.

How to create an Alias?

To create an alias, we need to create a file called bash_profile or bashrc. This file needs to be in the root directory and should be hidden to avoid mishandling of its contents.  Inside of this file, we create an alias which is basically a map of commands and the sets of commands/functions to be executed as a shortcut.

Firstly, you can locate to your root directory, open up a terminal or command prompt and type in the following command:

You should be now into so-called the root directory of your environment.

This will create a file if not present but won’t do anything if the file is already created and has content.

We can create an independent function in our bashrc or other bash scripts and further link those with a shortcut command by calling them. To create a function in BASH, we can use a simple syntax as follows:

The $1 is a positional parameter to take arguments from the command line and parse it to a function or in a script as a variable. You can learn about them in this article. Simply put, they make the script or the alias more dynamic and allow easier user input directly from the command line.

Now, we have the bashrc or bash_profile created, we can start with creating aliases. To create an alias we will require three things, the alias keyword to state that the following sentence will create an alias, the command or a shorthand word to be used for running the last piece i.e. the commands which are to be executed. The commands inside an alias need to be executable from the Shell/ BASH environment.

The syntax of an alias is as follows:

As said earlier, we require three pieces of information i.e. the alias keyword, the shorthand command, and the sets of commands or functions to be executed.

How to set a Bash Alias?

We can access the value of the last command as a return type by using the $? outside the function after the function call. But to just execute commands we can simply call the functions

The alias keyword indicates the BASH interpreter to load the map variable as a command.  The command is named “md” which is mapped to a function “x”. The function x creates the directory with the name passed to the md command and changes the directory into it. The function is defined and called in the end so as to keep it simple and straightforward.

The other way to do the same trick is to create a function independently elsewhere and call from the alias. The following alias dies the same thing but written in a different way:

This looks a lot readable and clean. This can also be used to add BASH syntax and semantics like loops, conditions, and other programmatic approaches to make the alias more customizable and flexible.

Difference between single and double quotes

For example in the statement : 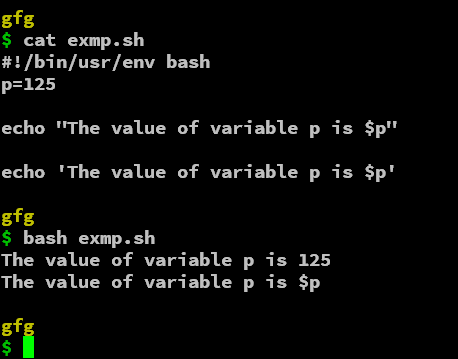 Structure of an Alias

The alias keyword in BASH replaces a string with another string. The shorthand command is the string that will be used instead of the string on the right-hand side in the command. Hence the alias keyword acts as an abbreviation for a string which is a set of commands or functions.

The command is the shorthand that will be used in the terminal. We can use any command or string avoiding the actual commands like cd, mkdir, rmdir, touch, echo, etc which might conflict with them and result in undesired behavior.