A Bash script is a plain text file. This file contains different commands for step-by-step execution. These commands can be written directly into the command line but from a reusability perceptive it is useful to store all of the inter-related commands for a specific task in a single file. We can use that file for executing the set of commands one or more times as per our requirements.

Here in this article, we are going to discuss the use of functions within Bash Scripting.

In programming, A function is a block of code that performs some tasks and it can be called multiple times for performing tasks. It provides modularity in the program and reduces the code length. The simplest example of the use of function in Bash scripting can be given as –

The above example shows a function that prints something when called. So, the basic syntax for writing functions within a Bash Script will be

Besides this, we can also have functions with passing arguments and with return values. Now let’s discuss them.

We can add arguments or parameters to a function and pass data using it to the function so that the function can act with those data. In bash scripting, we can use the following syntax for writing a function with passing arguments.

Syntax of Functions with Passing Arguments:

We can directly pass the arguments while calling the function and can access them with $1, $2 ….. $n within the function. Let’s see an example for more clear understanding of it.

Example of Functions with Passing Arguments:

Output of Functions with Passing Arguments:

Above is a script for adding two numbers. Here we have provided 2 and 3 as arguments. We have accessed them using $1 and $2 from the function and calculated their sum and printed it to the terminal. Below is the terminal shell depiction after executing the script – 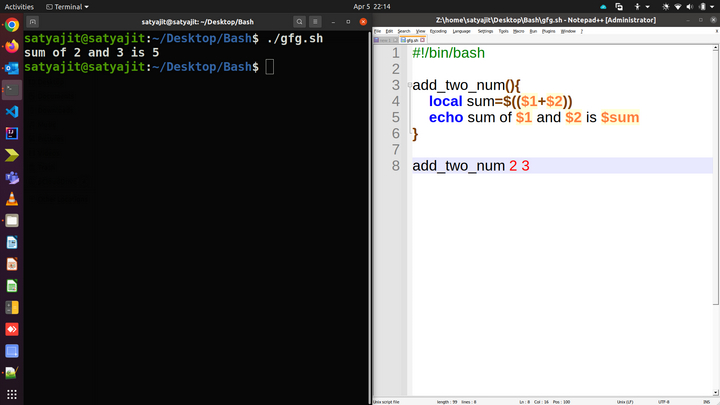 Example of Functions with Return Values:

Output of Functions with Return Values:

Below is the terminal shell output after executing the script – 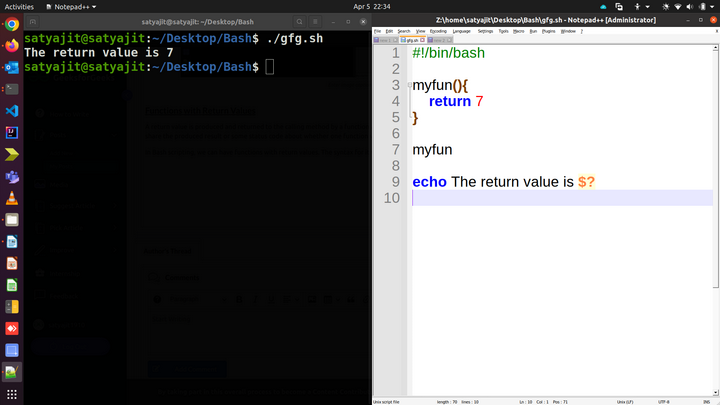 Now, Let’s modify the earlier sum of the two-number script.

Now the above code is an example of using both parameters and return value in a Bash script function.

Below is the terminal shell depiction after executing the script – 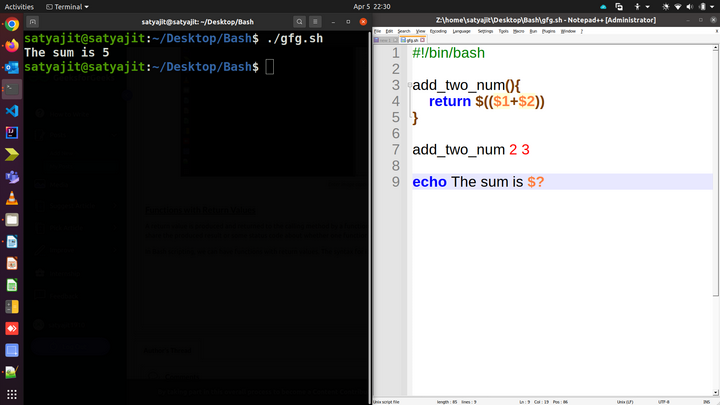 It is best practice to always use a local variable inside a function to avoid any unnecessary confusion.

Here in this above example, var2 is a local variable, so when we are accessing it from the function it is doing fine but when we are trying to access it outside the function, it is giving us an empty result in the output.

On the other hand, unlike programming languages, even though var3 is defined inside a function still it is acting as a global variable and it can be accessed outside the function. Below is the terminal shell depiction after executing the script – 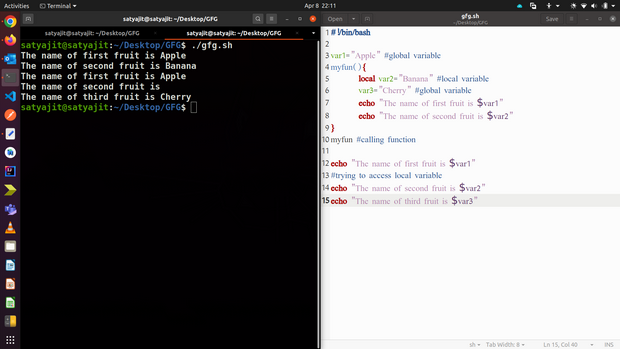 It is possible to have a function with the same name as that of a command.  It is helpful if we want to run a command with specific options or want to have a customized edition of it.

Here in this example, we have overridden the echo command. Now before printing the given string, it appends the string with some more words and then prints. Below is the terminal shell depiction after executing the script –