Variables are an important aspect of any programming language. Without variables, you will not be able to store any required data. With the help of variables, data is stored at a particular memory address and then it can be accessed as well as modified when required. In other words, variables let you store, read, access, and manipulate data.

When you write a bash script, you either want to manipulate the already defined variable, set the value of the variable, or simply read the predefined variables. There are various ways to set values of a variable:

If you are assigning the value of a variable to another variable then use the “$” sign otherwise it will show an error:

Note that when we define the value of newvar as myvar without the “$” sign it prints the value as “myvar” rather than getting the value of variable “myvar”.

3) The variable can be read simply by using the $ sign before the variable name. Example:

Now that we understand how the variables can be read or assigned a value, let us see what happens after we run the bash script:

There are a few rules to keep in mind while naming a variable:

Syntax to declare the variable or set its value

Declaring or setting the value of a variable is fairly simple. The basic syntax is as follows:

There should not be any space between variable name, equal sign, and the value assigned. Otherwise, you will encounter an error:

If the value of the variable contains spaces then use quotes to define them.

You can also declare a variable using declare command:

When you define a variable in your shell, it is only accessible during that particular session. Because that is a local variable. In the below example you can see that when we tried to access the variable “var1” in the new session (session number-1692), it does not print our variable value.

Note: echo $$ is used to print the process ID of the current session (See special variables below) 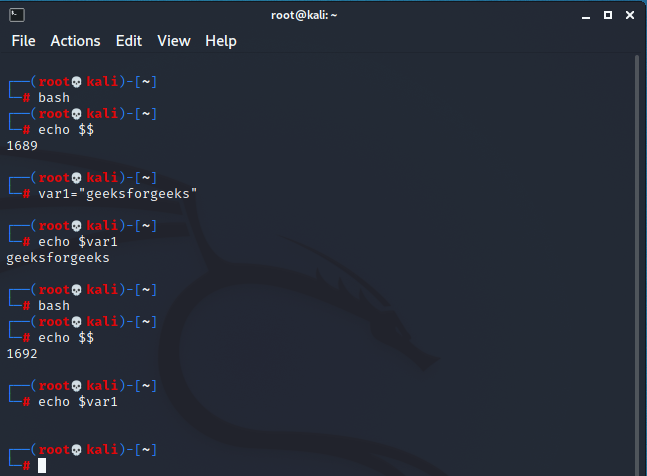 To make the variable globally accessible to any child sessions/processes (of the current session), we can make use of the ‘export’ command. Using the export command you can access the variable defined in your previous session in another session as well. Example: 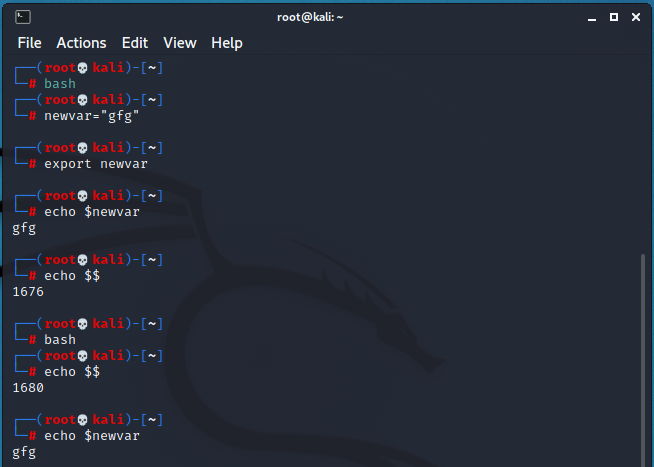 Let us now see how to define local and global variables while writing a shell script. It is no different than any other programming language.

Open it in vim editor using the command:

Go to the insert mode by pressing Esc and ‘i’.

And run it using the command:

The first value which is printed is of our local variable and the second value is of our global variable which did not change, regardless of the operation we performed inside the function ‘calc’.

There are two types of variables in bash:

You can see the list of system-defined variables using the following commands: 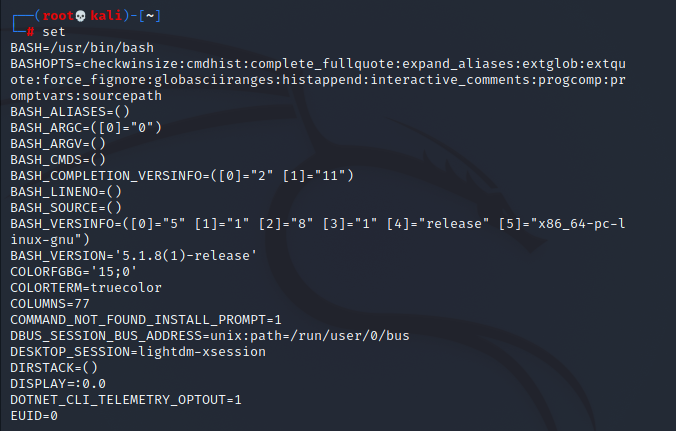 9. COLUMNS: Displays the length of the column used to show output on the terminal.

These are the variables that you define and assign a value.

If the value of the variable contains spaces then use quotes to define them.

Bash comes with some built-in special variables. These variables store some important data that can come in handy when you write a shell script. They are available for use to all users. Below is the list of these special variables and the result they store:

This special variable gives the PID or Process Identifier of the current shell. In the case of a shell script, it gives the PID under which the script is running.

Every command returns an exit status. Thus the exit status can be used to identify if the command is terminated successfully or there was some error.

Arrays are used to store data and in bash, you can store values of different types or the same type in an array.

Note: If your element includes whitespace then enclose that element in quotes.

Syntax to get the length of the array:

Syntax to get a particular array element:

Syntax to get the length of a particular array element:

In this example, we will write a script to iterate through the array elements, print their names and respective lengths.

Explicitly declaring datatype of a variable

In bash, we do not need to declare data types, like any other programming languages (int, str, etc..). The data type is identified by the shell script/shell itself (the variables defined in bash are termed as untyped). But there can be some circumstances when you will want to explicitly define the data type. In such cases, you can utilize the declare command to create a variable with a particular data type. Declare commands offer many flags to explicitly declare data types. Below is the list of those flags:

You can declare an integer using the below command:

Now that you defined the data type of variable “myvar” as an integer, if you try assigning its value as a floating number you will get an error.

Notice that if you try to assign the value of “myvar” as a string. It evaluates the string “xyz” as an integer and hence prints 0. Whereas the floating number gives an error.

Print all the values of an array using the command:

Print all the keys of an array using the command:

To print both the key, value pair you can use for loop:

You can pass in the special variables described above as an argument to your shell script.

Let us now try to make use of other special variables.

You can notice that using command line arguments helps you reduce the number of variables to be defined in a script.

It is evident from the results of the first terminal (i.e by simply running the  ‘ls’ command) that the output is extended to multiple lines. Whereas if we use command substitution the output is printed in a single line (space separated) .