In this article, we are going to talk about two important part of the computer system, that is Bare machine and Resident monitor. So first let’s study about them that how they are important for the operating systems.

The Bare Machine and Resident Monitor are not directly related to the operating system but while we study about memory management these components are really important to study, so let’s study them one by one and then their working.

Bare Machine:
So basically Bare machine is logical hardware which is used to execute the program in the processor without using the operating system. as of now, we have studied that we can’t execute any process without the Operating system. But yes with the help of the Bare machine we can do that.

Initially, when the operating systems are not developed, the execution of an instruction is done by directly on hardware without using any interfering hardware, at that time the only drawback was that the Bare machines accepting the instruction in only machine language, due to this those person who has sufficient knowledge about Computer field are able to operate a computer. so after the development of the operating system Bare machine is referred to as inefficient.

Resident Monitor:
In this section, if we talk about how the code runs on Bare machines, then this component is used, so basically, the Resident Monitor is a code that runs on Bare Machines.
The resident monitor works like an operating system that controls the instructions and performs all necessary functions. It also works like job sequencer because it also sequences the job and sends them to the processor.

The Resident monitors are divided into 4 parts as: 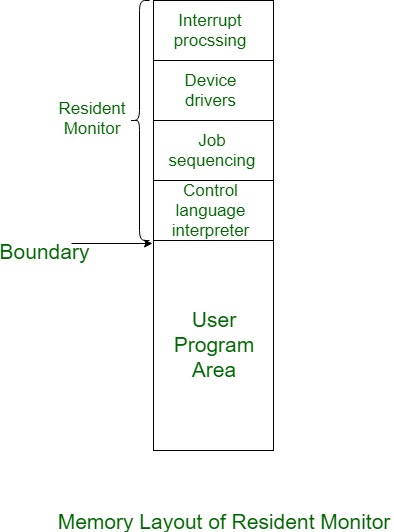