AWS vs Azure – Which One You Should Choose?

The Azure Cloud was announced in the year 2008 and was soon released in the year 2010 as Windows Azure. It was later renamed to Microsoft Azure in the year 2014. It is a cloud service created, managed, and maintained by Microsoft for building, testing, and deploying applications and services through data centers that are directly managed by Microsoft. It provides assistance for a huge number of programming languages, tools, and frameworks. These tools and frameworks include both Microsoft-specific and other third-party software and systems. Microsoft lists over 600 Azure services and it the next most commonly used cloud after AWS with a market percentage of 18%. Azure is very well know for the cloud service provider such as a Platform as a Service (PaaS) as well as an Infrastructure as a Service (IaaS) provider.

In 2006, AWS cloud platform was started by Amazon whereas in 2010, Azure cloud platform was started by Microsoft in 2010. Since AWS started much earlier than Azure, it has more experience in the cloud domain than any other cloud service provider. Even when AWS has met the needs of enterprises, Azure has been a consistent competitor to AWS and is quite a competent cloud service for businesses. AWS has a remarkable number of 77 availability zones in the world whereas, Azure has 54 availability zones worldwide. 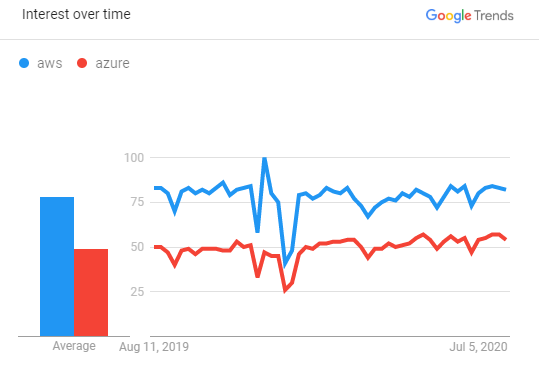 On comparing the two on various factors, it is clearly visible that both AWS and Azure are tough competitors and cannot be labeled as the best on a single feature. When AWS is seen as a larger cloud provider with lower cost and more developer-friendly, Azure seems to be more compatible with large firms who already rely on Microsoft products. Both the vendors are increasing innovation and advancing towards a better cloud service. So, when we compare AWS and Azure on the basis of costing, the Azure is more costly than AWS. As Azure is the exceptional alternative for the cloud service provider such as Platform-as-a-Service (PaaS) provider and also for a Windows integration. So, If an organization needs the infrastructure-as-a-service (IaaS) or a some other wide range of tools, then AWS will be the best option.

AWS provides the pay-as-you-go pricing model and it charges basis on per hour whereas the Azure’s pricing model is also same as AWS, pay-as-you-go, but azure will charge on thee basis of per minute. So, AWS can help the user to save more with maximum usage of the resources. Whereas, Microsoft Azure provides a very short-term commitments to its users. As Azure only allows their user to choose the plan between pre-paid or monthly charges. So, At the end, on the basis of pricing model, Azure is a little less flexible than AWS.

Nowadays, all the software applications needs a database so as to save the information. and both Azure and AWS provides the database services, regardless of whether the user needs a relational database(SQL) or a NoSQL offering. The Amazon’s RDS (Relational Database Service ), Amazon DynamoDB( Fully managed NoSQL database service) and Microsoft’s equivalent as SQL Server database. These all are highly durable, available and provides the automatic replication.

Previous
5 Tips to Prepare for Microsoft Azure Cloud Certification Exam
Next
Island of Isolation in Java
Related Articles
1. AWS OpsWorks vs AWS Beanstalk vs AWS CloudFormation
2. UI vs UX Design : Which Career Option Should You Choose?
3. Flask vs Django - Which Framework Should You Choose?
4. Which Database You Should Choose For Web Development?
5. Centralized vs Distributed Version Control: Which One Should We Choose?
6. GATE or GRE - Which One Should I Choose?
7. Kotlin vs Java - Which One Should I Choose For Android Development?
8. Which language should you learn first if you want to make an app?
9. 10 Reasons Why You Should Choose Python For Big Data
10. Microsoft Azure - Get Azure VM Properties using Azure PowerShell
Article Contributed By :