They all are declared in a memory header file.

This class template is deprecated as of C++11. unique_ptr is a new facility with a similar functionality, but with improved security.
auto_ptr is a smart pointer that manages an object obtained via new expression and deletes that object when auto_ptr itself is destroyed.
An object when described using auto_ptr class it stores a pointer to a single allocated object which ensures that when it goes out of scope, the object it points to must get automatically destroyed. It is based on exclusive ownership model i.e. two pointers of the same type can’t point to the same resource at the same time. As shown in the below program, copying or assigning of pointers changes the ownership i.e. source pointer has to give ownership to the destination pointer. 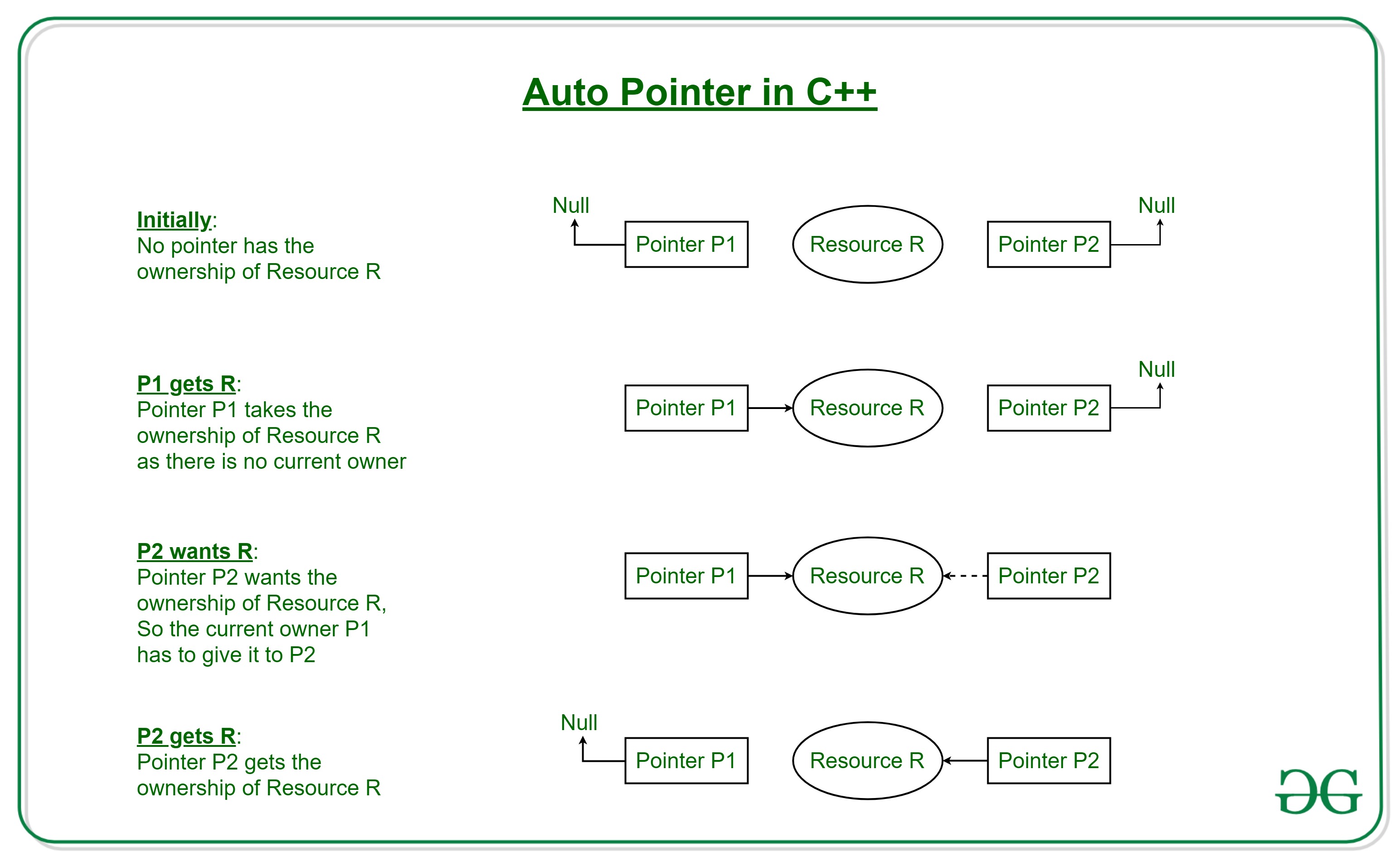 The copy constructor and the assignment operator of auto_ptr do not actually copy the stored pointer instead they transfer it, leaving the first auto_ptr object empty. This was one way to implement strict ownership so that only one auto_ptr object can own the pointer at any given time i.e. auto_ptr should not be used where copy semantics are needed.

Why is auto_ptr deprecated?
It takes ownership of the pointer in a way that no two pointers should contain the same object. Assignment transfers ownership and resets the rvalue auto pointer to a null pointer. Thus, they can’t be used within STL containers due to the aforementioned inability to be copied.

std::unique_ptr was developed in C++11 as a replacement for std::auto_ptr.
unique_ptr is a new facility with similar functionality, but with improved security (no fake copy assignments), added features (deleters) and support for arrays. It is a container for raw pointers. It explicitly prevents copying of its contained pointer as would happen with normal assignment i.e. it allows exactly one owner of the underlying pointer.
So, when using unique_ptr there can only be at most one unique_ptr at any one resource and when that unique_ptr is destroyed, the resource is automatically claimed. Also, since there can only be one unique_ptr to any resource, so any attempt to make a copy of unique_ptr will cause a compile-time error.

But, unique_ptr can be moved using the new move semantics i.e. using std::move() function to transfer ownership of the contained pointer to another unique_ptr.

The below code returns a resource and if we don’t explicitly capture the return value, the resource will be cleaned up. If we do, then we have exclusive ownership of that resource. In this way, we can think of unique_ptr as safer and better replacement of auto_ptr.

A shared_ptr is a container for raw pointers. It is a reference counting ownership model i.e. it maintains the reference count of its contained pointer in cooperation with all copies of the shared_ptr. So, the counter is incremented each time a new pointer points to the resource and decremented when the destructor of the object is called.

Reference Counting: It is a technique of storing the number of references, pointers or handles to a resource such as an object, block of memory, disk space or other resources.

An object referenced by the contained raw pointer will not be destroyed until reference count is greater than zero i.e. until all copies of shared_ptr have been deleted.
So, we should use shared_ptr when we want to assign one raw pointer to multiple owners.

When to use shared_ptr?
Use shared_ptr if you want to share ownership of a resource. Many shared_ptr can point to a single resource. shared_ptr maintains reference count for this propose. when all shared_ptr’s pointing to resource goes out of scope the resource is destroyed.

Cyclic Dependency (Problems with shared_ptr): Let’s consider a scenario where we have two classes A and B, both have pointers to other classes. So, it’s always like A is pointing to B and B is pointing to A. Hence, use_count will never reach zero and they never get deleted. 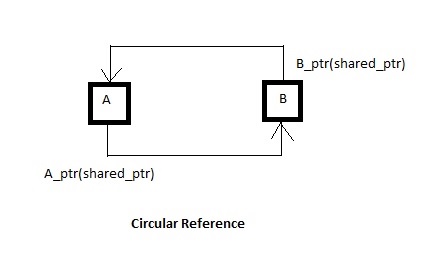 This is the reason we use weak pointers(weak_ptr) as they are not reference counted. So, the class in which weak_ptr is declared doesn’t have a stronghold of it i.e. the ownership isn’t shared, but they can have access to these objects.

So, in case of shared_ptr because of cyclic dependency use_count never reaches zero which is prevented using weak_ptr, which removes this problem by declaring A_ptr as weak_ptr, thus class A does not own it, only have access to it and we also need to check the validity of object as it may go out of scope. In general, it is a design issue.

When to use weak_ptr?
When you do want to refer to your object from multiple places – for those references for which it’s ok to ignore and deallocate (so they’ll just note the object is gone when you try to dereference).

Previous
"delete this" in C++
Next
Dangling, Void , Null and Wild Pointers
Related Articles
1. fesetround() and fegetround() in C++ and their application
2. Queries to insert, delete one occurrence of a number and print the least and most frequent element
3. Get first and last elements from Array and Vector in CPP
4. Similarities and Differences between Ruby and C language
5. Code Optimization Technique (logical AND and logical OR)
6. Similarities and Differences between Ruby and C++
7. Generate an array of given size with equal count and sum of odd and even numbers
8. Getting System and Process Information Using C Programming and Shell in Linux
9. Sort and separate odd and even numbers in an Array using custom comparator
10. Catching Base and Derived Classes as Exceptions in C++ and Java
Article Contributed By :