An element’s atomic structure refers to its nucleus and it’s constitution, how and of what material it is made up of. It also involves the electrons that exists around the nucleus. The primary things that make an atomic structure of matter are protons, electrons and neutrons. The neutrons and protons are at the core of the atom and make the nucleus, and the nucleus is surrounded by the electrons that belong to the atom. The atomic number of an element is the total number of protons present in the nucleus of that element’s atom.

Atoms which are neutral in terms of the charge, have equal number of protons and electrons. This makes the atom neutral because protons are positively charged and electrons are negatively charged. But atoms have the ability to lose or gain electrons in order to increase their own stability and the resulting entity is charged in nature and is called an ion.

No two elements have equal number of protons and electrons, this makes the atomic structure of every element different. This is the main reason behind every element’s unique characteristics. Many scientists around the world, in 18th and 19th century, attempted to explain the atomic structure with help of their own atomic models. Each of such models had their own plus points as well as negative points. But they all played a huge role in the development of modern atomic model. The most noted contributors in this field were J.J. Thompson, John Dalton, Emest Rutherford and Neils Bohr. 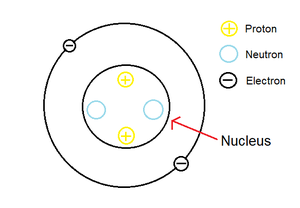 Helium atom as per Bohr’s model.

John Dalton was a British Chemist and he suggested that every matter is made up of atoms. Also that atoms are indivisible and indestructible. He also suggested that all atoms of a particular matter are all same, but atoms of different elements had different size and mass.

According to Dalton’s atomic theory, Chemical reactions involve the rearrangements of atoms in order to form the products. According to the postulates proposed in his theory, atomic structure is made up of atoms and they are the smallest particles responsible for chemical reactions to occur.

Dalton’s atomic theory was able to explain the Laws of chemical reactions successfully, named as the Law of conservation of mass, Law of constant properties, Law of multiple proportions and Law of reciprocal proportions.

Sir Joseph John Thomson who was also an English chemist famous for his discovery of electrons for which he also got the Nobel Prize. He conducted a cathode ray experiment to invent electrons. In this experiment, a tube of glass that has two openings is taken. One opening is for the vacuum pump and the other is for intake through which the gas to be filled in the tube is pushed in. Using the vacuum pump a partial vacuum pump is maintained inside the glass chamber. With the help of electrodes, a high voltage power supply is linked. In simple words, a cathode and anode are placed inside the glass tube.

The following observations were made when the current was allowed to flow between the cathode and anode.

The reason for the failure of Thomson’s model is that this model is not clear about the stability of an atom. This model could not adjust to other subatomic particles discovered in the future.

Rutherford who was a student of J. J. Thomson discovered another subatomic particle called Nucleus. This discovery made huge changes to the atomic structure. The observations made by Thompson in his experiment were used by Rutherford to propose his theory for atomic structure.

Rutherford used the radioactivity phenomenon in conducting his experiment. He used radioactive material radium bromide (RaBr). RaBr emits α particles which is a form of radiation. A thin gold metal sheet was put up in the setup. Then the α particles were bombarded on this sheet. To observe the deflection of the particles a screen of Zinc Sulfide (ZnS) was used and it was placed behind the Gold foil. Rutherford further developed a detector in order to count the number of radioactive particles. Initially, he recorded the count rate of RaBr as he kept a count of α particles emitted per minute.

Following observations were made by Rutherford and conclusions were drawn:

Drawing conclusions from all the above observations, Rutherford proposed his Atomic structure which had the following properties –

Just like other atomic models, Rutherford’s model also had many shortcomings.

All the components are put together under the name of the Nucleons of an atom. It can either be a neutron or a proton. The number of protons is unique for every element, which is denoted by its unique atomic number. There can be multiple atomic structures for an element, but have different numbers of nucleons.  These variants of an element have different numbers of nucleons. These variants are called isotopes of the elements. This leads to the fact that isotopes have the same number of protons but different number of neutrons.

To describe the structure of an isotope, the symbol of the element is used along with the atomic number and the mass number of the isotope. To give an example, Hydrogen has 3 isotopes named protium, deuterium and tritium. The stability of isotopes is different. The half-lives are also different. But they generally have similar chemical behaviour because they have the same electronic structures.

Bohr proposed his model in 1915 and it is the most widely used atomic model and is based on Planck’s theory of quantization. Bohr’s theory is applicable to the modified atomic structure. It explains that electrons always move in fixed orbitals only, and they are not present everywhere in the atom. Bohr also explained that each orbit is a fixed energy level. An orbit is also called a shell. Rutherford only explained the nucleus of the atom. Bohr made changes to that model and added electrons and energy levels.

Bohr’s model is a small nucleus that is positively charged which is surrounded by negative electrons and they move around in orbits. Bohr found out that larger the distance of an electron from the nucleus, the larger is its energy.

Question 1: What are the advantages of the Periodic Table?

Question 4: Why Rutherford’s model could not explain the stability of an atom?

According to Maxwell’s electromagnetic theory, when charged particles are accelerated, they should emit electromagnetic radiation. Similarly, an electron in its orbit moves at a very high velocity and it will emit radiation; the orbit will then continue to shrink and the electron ultimately falls into the nucleus which does not happen in an atom.

Question 5: What are the Flaws in Dalton’s Atomic Theory?

There were multiple flaws found in dalton’s atomic theory. The biggest flaw was that atoms are not the elementary particles of matter, but they are further divided into three main categories known as electrons, protons, and neutrons. But they are the smallest entities that take part in a chemical reaction. The discovery of isotopes further led to a crucial flaw in this theory. Initially, it was said that the same elements have similar atoms, but isotopes proved that atoms in some elements can have variable densities and masses. Similarly, isobar’s discovery denied the fact that atoms are different for different elements. The whole number ratio theory was also found incorrect as it was not observed in complex compounds.