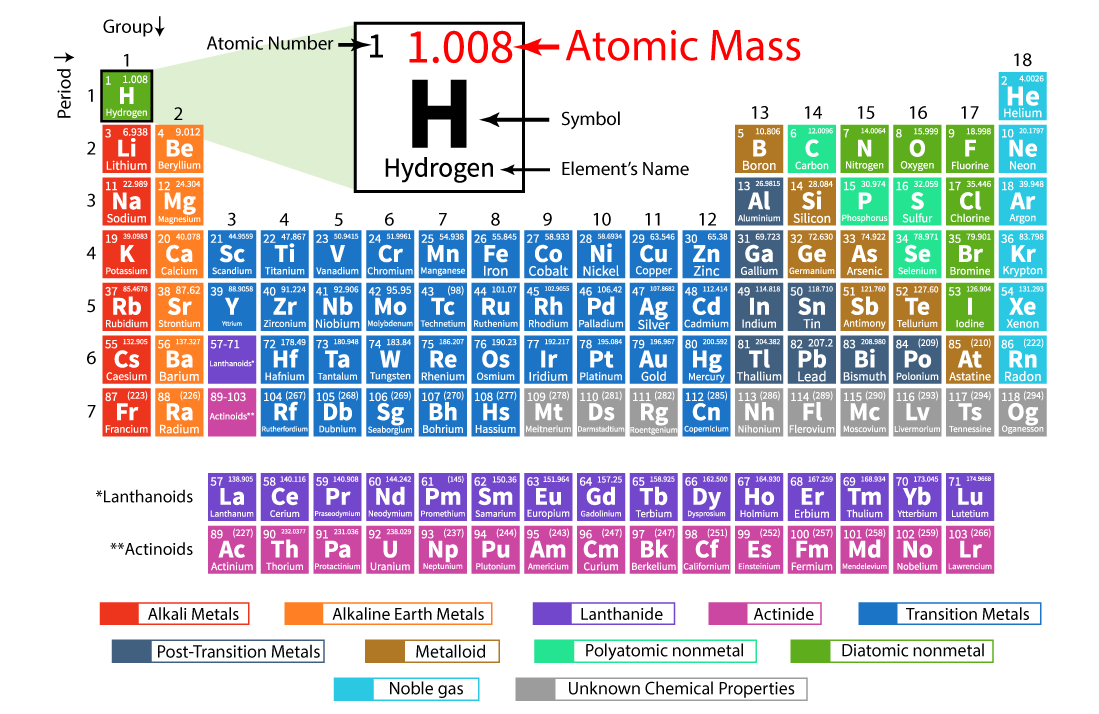 What is Atomic Mass?

The mass of each isotope is multiplied by its abundance to produce the relative atomic mass, which is a weighted average of all the isotopes of that element. For example, one Carbon atom has just six protons and typically six neutrons in its nucleus, thus its atomic mass should be roughly 12 amu.

Atomic mass units were created based on the masses of protons and neutrons. This is much simpler than stating that a proton or neutron weighs 1/167000000000000000000000th of a gram. Perhaps smaller than electrons, protons have a mass that is 1,836 times more than that of an electron.

Here is the table showing the first 30 elements of the periodic table with their atomic masses and atomic number:

An element’s atomic number is determined by how many protons are found in one of its atoms. Each atom in an element has precisely the same number of protons. For instance, the atomic number of carbon is “6” since all carbon atoms have six protons.

Regardless of the presence of neutrons, elements are classified according to the number of protons in their nuclei. Uncharged subatomic particles known as neutrons are stable when contained in an atomic nucleus. Except for hydrogen, all other elements’ atoms have neutrons in the nucleus. Hence,

Atomic Number = Number of Protons in an atom

The total number of protons and neutrons in an atom’s nucleus is known as the mass number. Consequently, an atom of carbon will have an exact mass of 12 if its nucleus contains 6 protons and 6 neutrons.

The formula below can be used to determine the mass number of an atom of a specific element when looking at the periodic table of elements:

How to calculate the Atomic Mass?

Here are three ways to determine the Atomic Mass, depending on the given conditions:

The atomic masses of the constituent atoms that make up a compound are added to determine its molecular mass.

The mass a molecule carries is known as its molecular mass, additionally known as molecular weight. It can be computed by summing the masses of all the atoms in the molecule and multiplying the result by the number of the element’s atoms. One oxygen atom and two hydrogen atoms, for instance, make up water. A water molecule’s mass is determined by multiplying its average hydrogen atomic mass by two and adding its average oxygen atomic mass. The atoms that make up the molecule are what define an element’s molecular mass.

FAQs based on Atomic Mass of Elements

Question 1: What is atomic mass?

The mass of a single atom in a chemical element is known as its atomic mass. It involves the masses of protons, neutrons, and electrons, the three atomic subatomic particles.

Question 2: What is the significance of atomic mass?

The fundamental physical property of matter is mass. The atomic mass refers to the mass of an atom or a molecule. The atomic mass is used to determine the average mass of atoms and molecules as well as to solve stoichiometry problems.

Question 3: What is one amu?

Question 4: Why was carbon-12 selected as the reference element for calculating atomic mass?

Because it is the only atom with the same whole-number mass as the amu scale, carbon-12 is utilised in amu.

Question 5: What is an atom consist of?

The three main types of particles that make up an atom are protons, electrons, and neutrons.

Question 6: What is the atomic mass number?

The total number of protons and neutrons (together known as nucleons) in an atomic nucleus is the mass number.

Question 7: What is the atomic mass of Sodium?

Question 8: Which element has the tiniest particle, which may or may not have its own existence but is always engaged in a chemical reaction?

An atom is the tiniest particle of an element that may or may not have its own existence but is always involved in a chemical reaction.