When looked at the night sky many heavenly bodies like stars, moon, satellites, etc are observed in the sky.  Satellites are small objects revolving or orbiting around a planet or on object larger than it. The most commonly observed and known satellite is the moon, the moon is the satellite of Earth, as the moon orbits around the earth in its fixed orbit.

Moon as the Satellite of Earth

Satellites are objects that either occur naturally or man-made that used to go around a planet that is larger than it and rotates in its axis. There are various satellites including the moon present in the solar system. Therefore, on the basis of existence satellites are divided into two main categories:

e.g. The moon is the natural satellite of Earth similarly, Earth, Jupiter and Venus orbits around the Sun in their fixed orbit.

Any object that people have made and launched into orbit using rockets is called the artificial satellite. Presently, there are over a thousand active satellites orbiting the Earth. The satellite’s size, altitude and design depend on the use of the satellite. These satellites are also fitted with delicate instruments and cameras, made to rotate around planets in pre-fixed orbits and are launched by rockets from the Earth.

e.g. Sputnik-I, launched on 4 October 1957, by the Soviet Union launched as the world’s first artificial satellite. After that USA send Explorer 1. Since then, almost 8,900 satellites from more than 50 countries have been launched. According to an estimate, some 5,000 satellites remain in the orbit. Out of these 5000, about 1,900 were operational, while the rest have exceeded the numbers of their useful lives and become space debris now. These satellites are useless and will revolve until their destruction.

The first-ever artificial satellite was successfully launched by the Soviet Union on October 4, 1957. This satellite was called Sputnik-I. Sputnik-I has weighed 183 pounds and about the size of a cricket ball. It took 98 minutes to orbit the earth. The launch of this satellite, Sputnik-I has been named as the start of the space age and the start of the US-USSR space race which spanned over the years of the 1960s. Another satellite launched on November 3rd in the same year when the Soviet’s launched Sputnik-II. Sputnik-II carried a much heavier payload along with a dog named Laika.

Immediately after Sputnik-I & II, the US Defense Department-funded another satellite project run by a man named Von Braun. Von Braun, his team and the US Army at Redstone worked on the Explorer Project. Explorer I was launched on January 31st. It consists of a small, scientifically important payload that is used to discover the belts of magnetic radiation around the earth. These were named after the principal investigator James Van Allen. This program continued to create a series of successful lightweight scientific spacecraft.

On the basis of the direction of the motion of the satellites and the distance from the Earth’s surface, the artificial satellites are broadly classified into two;

1. Geostationary Satellites: The artificial satellites that rotates in the same direction as the earth in their pre-fixed orbits which is around 35, 800 km away from the Earth’s surface are called the geostationary or geosynchronous satellites.

2. Polar Orbiting Satellites: The artificial satellites that orbit around the north-south orbit passing over the north and the South Pole and is approximately 500-800 km away from the Earth’s surface are called the Polar satellites. 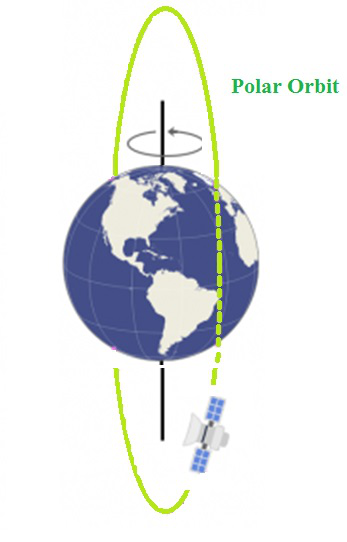 Some important uses of artificial satellites are:

The differences between natural and artificial satellites are,

Problem 2: How both geostationary and polar-orbiting satellites are different from each other.

The difference between the geostationary and polar satellites are as follows:

India’s first satellite was Aryabhatta. It was built by ISRO and launched by the Soviet Union on 19 April 1975. It was named after the mathematician Aryabhata. In 1980, Rohini was the first ever satellite to be placed in orbit by an Indian-made launch vehicle, SLV-3. Some other Indian satellites are INSAT, IRS, Kalpana-1, EDUSAT, etc.

Problem 4: What is satellite communication?

Problem 5: Name some more types of satellites on the basis of their applications.

On the basis of the applications of satellites in different fields, the satellites are categorized as: