Argon is a chemical element with the atomic number 18. It belongs to group 18 of the periodic table and is the third most argon gas. The gas used in fluorescent tubes is monatomic argon gas. It has the molecular formula Ar. Argon is a non-combustible gas that is colorless and odorless and has a higher density than air. When it is subjected to extreme heat or fire, the material ruptures violently. Argon is the first Nobel gas to be found. It was recognized by the English physicist Lord Rayleigh and Scottish scientist William Ramsay in 1894. Argon is from the Greek word “Argos” and that signifies “lazy” or “inactive”. It has a place with respectable gas and makes up around 0.93% of Earth’s air. It is the third most plentiful gas in the air.

Its chemical formula is Ar. It has a molecular weight of 39.948 g/mol. It is a stable gas it doesn’t have any type of chain structure. However, there is a gas structure of argon showing the orbits, 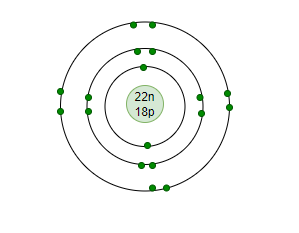 The world’s climate is established at around 0.934% by volume and 1.288% by mass. Besides, the air is the essential modern wellspring of sanitized argon items. By fractionation, businesses separate argon from the air and most regularly cryogenic partial refining is an interaction that produces other unadulterated gases like nitrogen, neon, xenon, and oxygen. The seawater contains 0.45 ppm of argon and the world’s outside contains around 1.2 ppm of argon.

Mechanically, they produce it by partial refining of fluid air. Argon is an inert protecting gas that we for the most part use in welding and other modern cycles that requires high temperature in which normal lifeless substances become responsive like in graphite electric heaters use it to keep the graphite from consuming.

Argon atomic properties refer to the qualities of a single argon atom. These include:

Question 1: Is argon a metal or nonmetal?

Argon is a non metal element. It is found in group 18 (VIIIa) of the periodic table of elements, which is also called the noble gases group.

Question 2: What is the Argon Chemical Formula?

Argon (Ar) is a chemical element that belongs to Group 18 (noble gases) of the periodic table. It is the most plentiful and widely used noble gas on the planet.

Question 3: What are 5 uses for argon?

Five Uses of argon in human society include the following:

Question 4: Is argon harmful to humans?

Argon is naturally present in the environment and is generally considered non-toxic. However, exposure to high concentrations of argon can reduce the availability of oxygen in the air and thus cause asphyxiation. Liquid argon is also extremely cold and can cause frostbite on contact.

Question 5: How Do You Calculate Argon Molar Mass?

Question 6: Is argon used in medicine?

Argon has likewise been utilized as a careful instrument in the clinical field. Argon Plasma Coagulation (APC) is a non-contact strategy that utilizes high-recurrence argon plasma feeling to close up encompassing tissues and control draining around careful destinations through coagulation.