Area is a quantity that expresses the extent of a two-dimensional figure or shape or planar lamina in the plane. Lamina shapes include 2D figures that can be drawn on a plane, e.g., circle, square, triangle, rectangle, trapezium, rhombus and parallelogram.

A polygon is a two-dimensional shape that is formed by straight lines. The examples of polygons are triangles, hexagons and pentagons.

The area is the region inside the boundary/perimeter of the shapes which is to be considered.

Area of any 2D shape is the size of the region enclosed within it. In geometry, the area can be defined as the space occupied by a flat or the surface of an object. The area of a figure is the number of unit squares that cover the surface of a figure. Area is measured in square units such as square centimetres, square feet, square inches, etc.

These are some 2-D Geometries

Basically, a circle is a closed curve with its outer line equidistant from centre. The fixed distance from the point is the radius of the circle.

In real life, you will get many examples of the circle such as a wheel, pizzas, a circular ground, etc.

The radius of the circle is the line which joins the centre of the circle to the outer boundary. It is usually represented by ‘r’ or ‘R’.

In the formula for area and circumference of a circle, radius plays an important role which you will learn later.

The diameter of the circle is the line which divides the circle into two equal parts. In an easy way we can say, it is just the double of the radius of the circle and is represented by d’ or ‘D’.

It is the curve traced out by a point that moves in a plane so that its distance from a given point is constant. 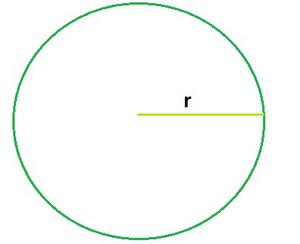 Now how can we calculate the area for any circular object or space? In this case, we use the formula for the circle’s area.

In geometry, the area enclosed by a circle of radius r is πr². Here, the Greek letter π represents the constant ratio of the circumference of any circle to its diameter, approximately equal to 22/7 or 3.14159.

Example: Find Out the area of the following circle. 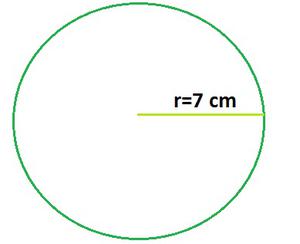 Putting the value of r in formula

The size of any object can be measured in many ways. For instance, we all normally calculate how tall the building or the size of a swimming pool and how deep it is.

Area of rectangle is equal to the multiplication of length and height of the rectangle.

Example: Find Out the area of the following rectangle

A square is a four-sided polygon (2d Shape), whose four sides are equal in length and all the angles are equal to 90°.

A square is a rectangle with all equal sides. The area is the space covered by the object. It is the region occupied by any shape.

While measuring the area of a square, we consider only the length of its side. All the sides of a square are equal and hence, its area is equal to the square of the side. 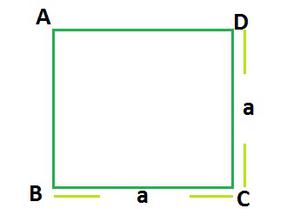 Area of Square is equal to the square of the side of the Square.

Example: Find Out the area of the following square. 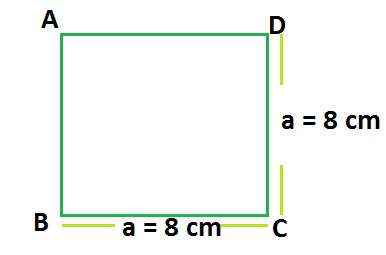 A triangle is a polygon with three edges and three vertices. It is one of the basic shapes in geometry. In general, the term “area” is defined as the region occupied inside the boundary of a flat object or figure. The measurement is done in square units with the standard unit being square meters (m2).

For the computation of area, there are pre-defined formulas for squares, rectangles, circle, triangles, etc. The area of a triangle is defined as the total region that is enclosed by the three sides of any particular triangle. It is applicable to all types of triangles, whether it is scalene, isosceles, or equilateral. To be noted, the base and height of the triangle are perpendicular to each other.

A triangle with vertices A, B, and C is denoted triangle ABC.

In Euclidean geometry, any three points, when non-collinear, determine a unique triangle and simultaneously, a unique plane. 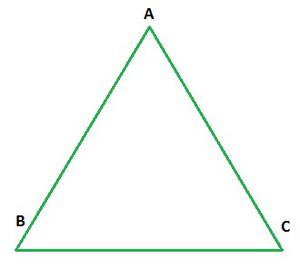 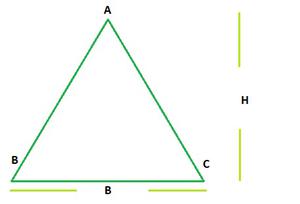 We can also determine the area of the triangle using Heron’s Formula whenever height h is not known. So now we will discuss heron’s formula.

Example: Find out the area of the triangle with height of 13 cm and base of 14 cm.

It is also termed as Hero’s Formula. We don’t have to need to know the angle measurement of a triangle to calculate its area. In geometry, Heron’s formula (sometimes called Hero’s formula), named after Hero of Alexandria, gives the area of a triangle when the length of all three sides are known.

Hero of Alexandria was a great mathematician who derived the formula for the calculation of the area of a triangle using the length of all three sides. He also extended this idea to find the area of quadrilateral and also higher-order polygons.

This formula has its huge applications in trigonometry such as proving the law of cosines or the law of cotangents, etc.

According to Heron, we can find the area of any given triangle, whether it is a scalene, isosceles or equilateral, by using the formula, provided the sides of the triangle.

Suppose, a triangle ABC, whose sides are a, b and c, respectively. Thus, the area of a triangle can be given by;

a = length of side a

b = length of side b

c = length of side c

Example: Find Out the area of the following triangle 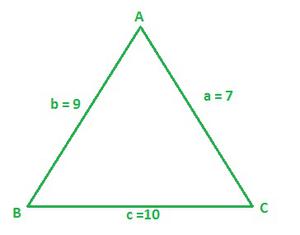 First side of Triangle a = 7 cm

Second side of Triangle b = 9 cm

Putting the values in formula

Application of Heron’s Formula in finding the area of Quadrilateral

A quadrilateral can be drawn as the sum of two triangles, so we can use Heron’s Formula in finding the area of the quadrilateral. We can understand this using an example

Example: Find out the area of the following quadrilateral using Heron’s Formula.

We can calculate area of triangles using heron’s Formula where

We can verify this answer using simple area formula of rectangle which is length × height. Area of rectangle is 12×5 equals to 60 cm2 which is equal using Heron’s Formula.

Example: Find out the area of the triangle with height of 12 cm and base of 9 cm.