MySQL is Relational Database Management system which is free Open Source Software Under  GNU License. It  is also supported by Oracle Company .It is fast , scalable, easy to use database management System. MYSQL support many operation system like Windows, Linux, MacOS etc.

MySQL is Structured Query Language which is used to manipulate, manage  and retrieve data with the help of various Queries.

MySQL is developed and supported by  MySQL AB which is a Swedish  Company and written in C and C++ programming language. It was developed by Michael Widenius and David Hughes .It is often  used to say that MYSQL is named after the name of daughter of the co-founder  MIchael  Widenius whose name is ‘My’. 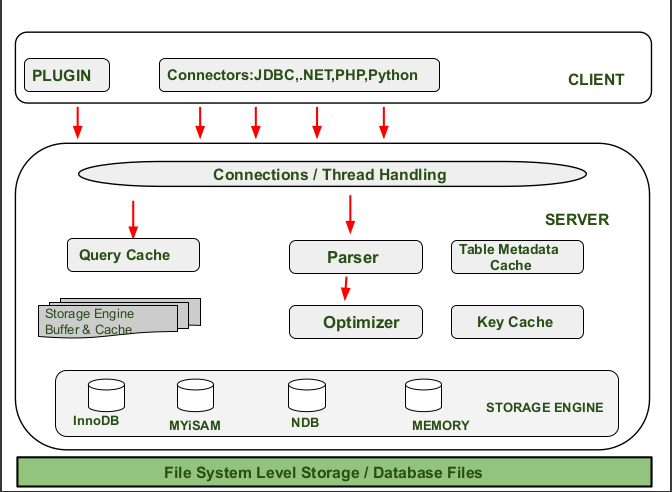 Client Layer:
This layer is the topmost layer in the above diagram. The Client give request instructions to the Serve with the help of Client Layer .The Client make request through  Command Prompt or through GUI  screen by using valid MYSQL commands and expressions .If the Expressions and commands are valid then the output is obtained on the screen.  Some important services of client layer are :

Security :
After authentication when  the client gets connected successfully to MySQL server, the server will check  that a particular client has the privileges to issue in certain queries against MySQL server.

Server Layer:
The second layer of MYSQL architecture is responsible for all logical functionalities of relational database management system of MYSQL. This Layer of MYSQL System is also known as “Brain of MYSQL Architecture”. When the Client give request instructions to the Server and the server gives the output as soon as the the instruction is matched.  The various sub components of MYSQL server are:

Storage Layer:
This Storage Engine Layer of MYSQL Architecture make it’s unique and most preferable for developer’s . Due to this Layer MYSQL layer is counted as the mostly used RDBMS and is widely used. In MYSQL server , for different situations and requirement’s different types of storage engines are used which are InnoDB ,MYiSAM , NDB ,Memory etc. These storage engines are used as pluggable  storage enginer where tables created by user are plugged with them.