Arch Linux is one of the independently developed Linux distros with its community and official package repositories. Arch Linux is known for its minimal base system, configuration flexibility, and bleeding edge software rollouts. Followed the official arch installation guide from the Arch wiki website with a few tweaks that we will do while installing Arch.

This article describes how to install and configure Arch Linux on a UEFI machine.

A computer that is x86-64 compatible uses UEFI boot, has at least 512 MB or more of Ram, and a USB drive for the Boot drive.

We need to prepare a boot drive by burning the Arch Linux iso using software like Rufus.

The official iso image file can be downloaded from the Arch Wiki website download page, choose a mirror according to your country and download the .iso file.

The SHA1 hash for the iso we downloaded is the same as the generated one now we can proceed further.

Once the iso is verified it can be burned to the USB drive using Rufus or Etcher. Download either of them from their official sites we  have used Rufus over here 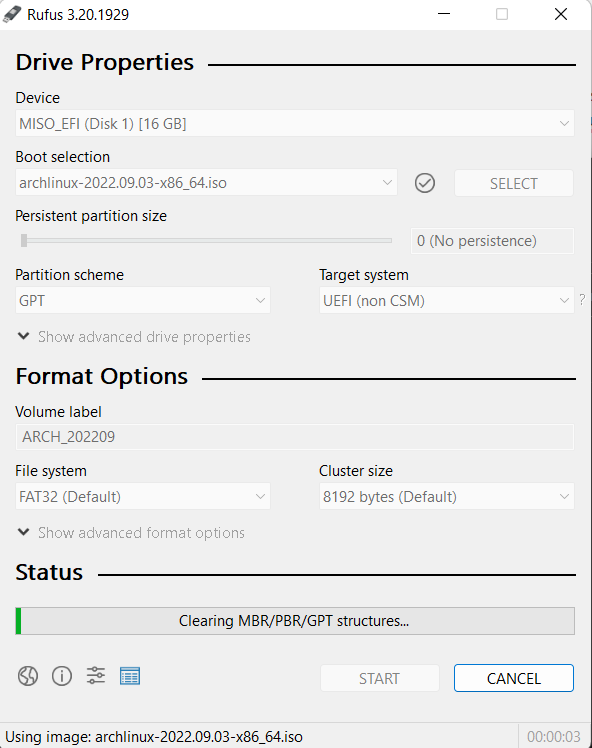 Once the process is completed by Rufus the drive is ready to be booted into.

Before booting into the drive, make sure the Secure Boot option is disabled in the BIOS settings and that the bootable USB drive is connected to a working USB port on the booting computer.

Once done, you should figure out how to get into the boot menu of your particular computer. eg:- On HP computers press the F9 key several times while restarting.

In the boot menu, you can see all the drives that can be booted on your system. Select your Arch USB drive.

If everything works well you will be directed to the following screen. 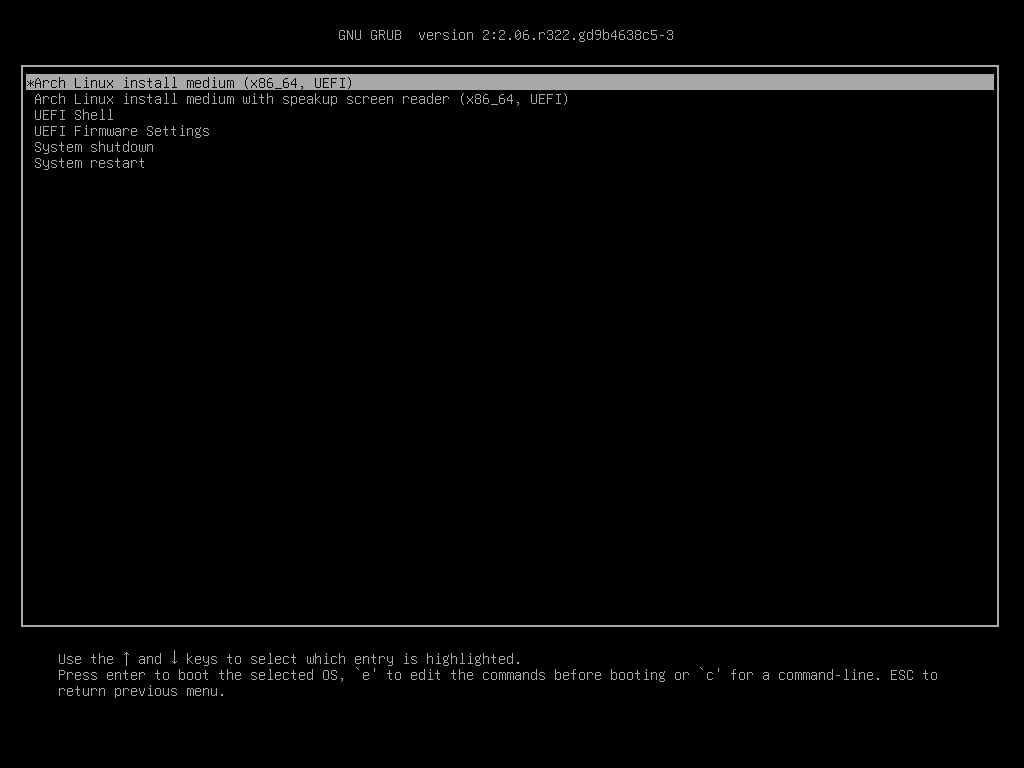 Continue with the first option. If you get an error, check the previous steps again.

If you are on the following screen you have now successfully booted into the live environment.

Let’s check the boot mode with the following command:

A bunch of files will be listed which means you booted in UEFI mode. If the directory is not available, you have booted in BIOS mode.

Step 1: Connect to the Internet

First, let’s see all the network interfaces available by the following command

You can see the Ethernet, Wifi, and their states like Up or DOWN depending on if connected or not. We recommend using an ethernet connection but you can also go with a wireless connection by using iwctl.

The official docs use the Fdisk tool for disk partitioning, but we use cfdisk, which has a GUI, so it’s probably a quick and easy way to partition a disk.
Simply create the following types of partitions using the cfdisk command as shown in the image below. 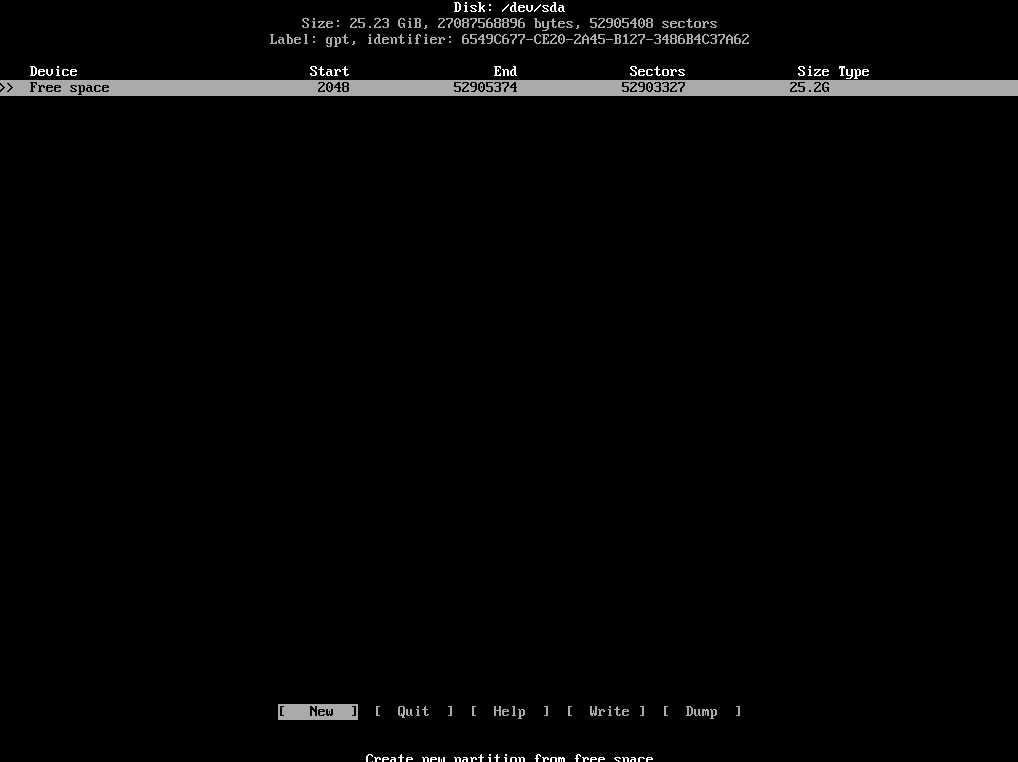 After running the command cfdisk you will see a screen like the above, it shows all the drives your system has with their capacities. 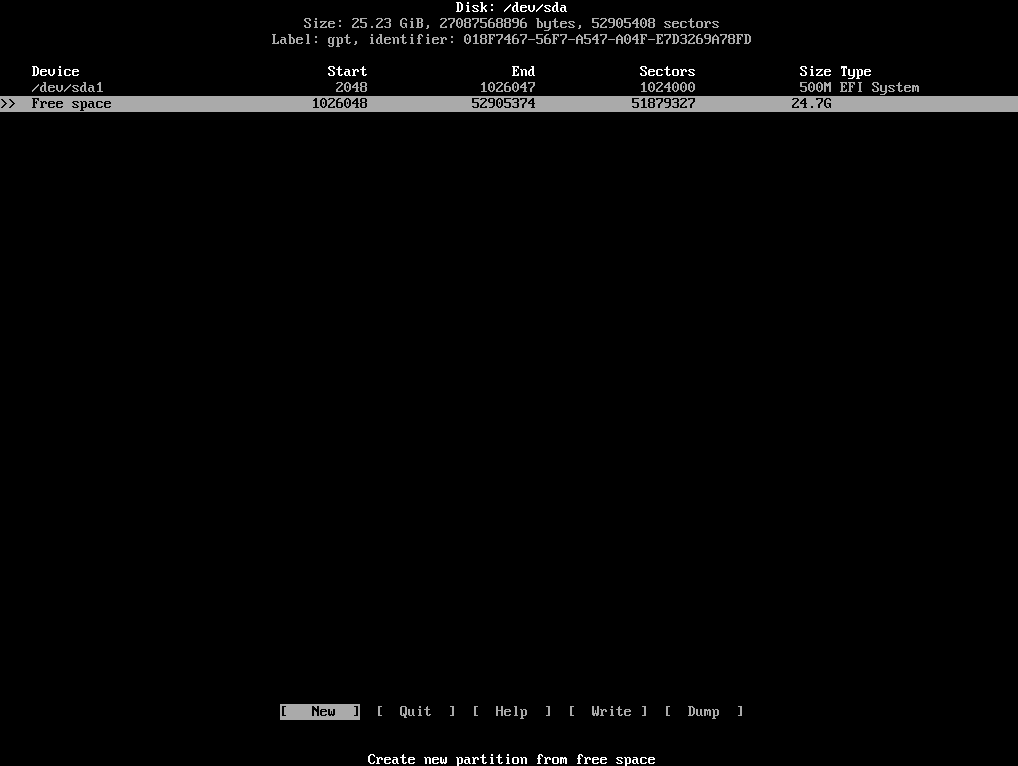 Press Enter on the New option at the bottom, enter 500MB as the partition size, set the partition type to  EFI system and you’re done, you just created an EFI System partition of size 500 MB which we will be using as a boot partition. Same way create the following type of partitions as shown: 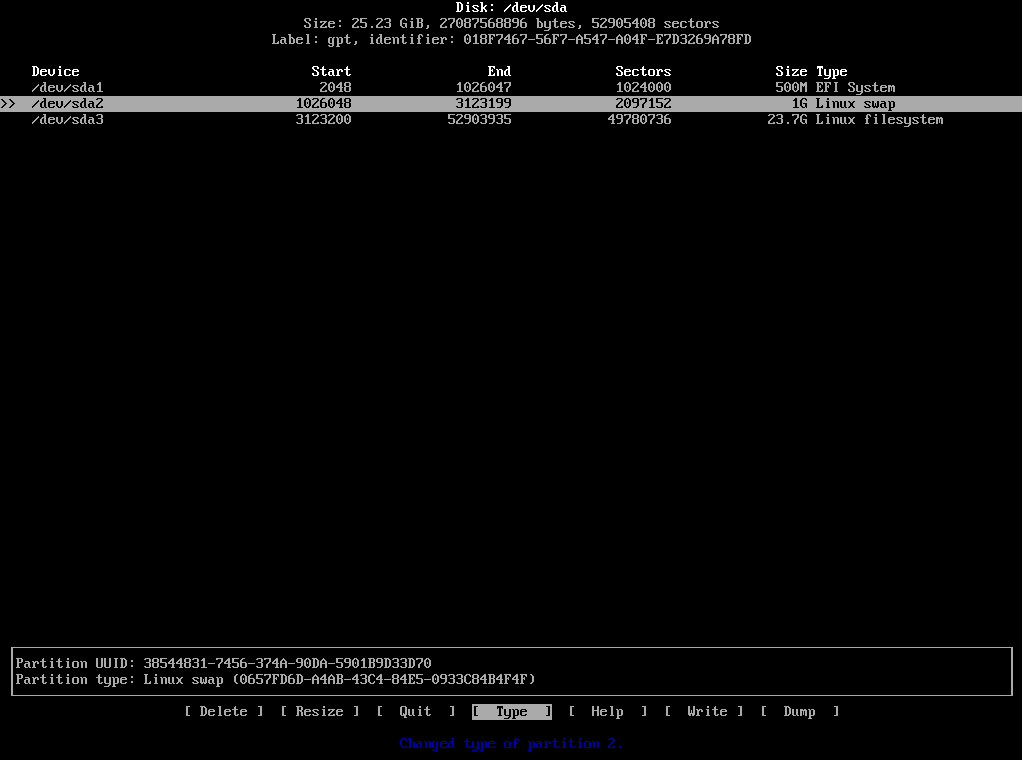 We have created 3 GPT partitions an EFI system partition for boot ( at least 500MB), a swap, and a root partition. You can allocate them whatever amount of memory you want.

Once the partition has been created, each newly created partition must be formatted with an appropriate file system.

Let’s start with the EFI system partition which is /dev/sda1 in our case,

And at last the root partition,

So far we have created a partition and formatted it, but that’s not enough. Because how Linux has to know which partition is used for what purpose, it needs to mount the partitions.

If you created a swap partition, it needs to be enabled before you can use it,

Phase 4: Installing the base system and essential packages

Up Till now, we haven’t even installed Linux. To install the Linux kernel along with the required packages, run the following command:

It is going to install base packages such as utilities for the file system, firmware for other devices, text editor, networking essential software, etc. 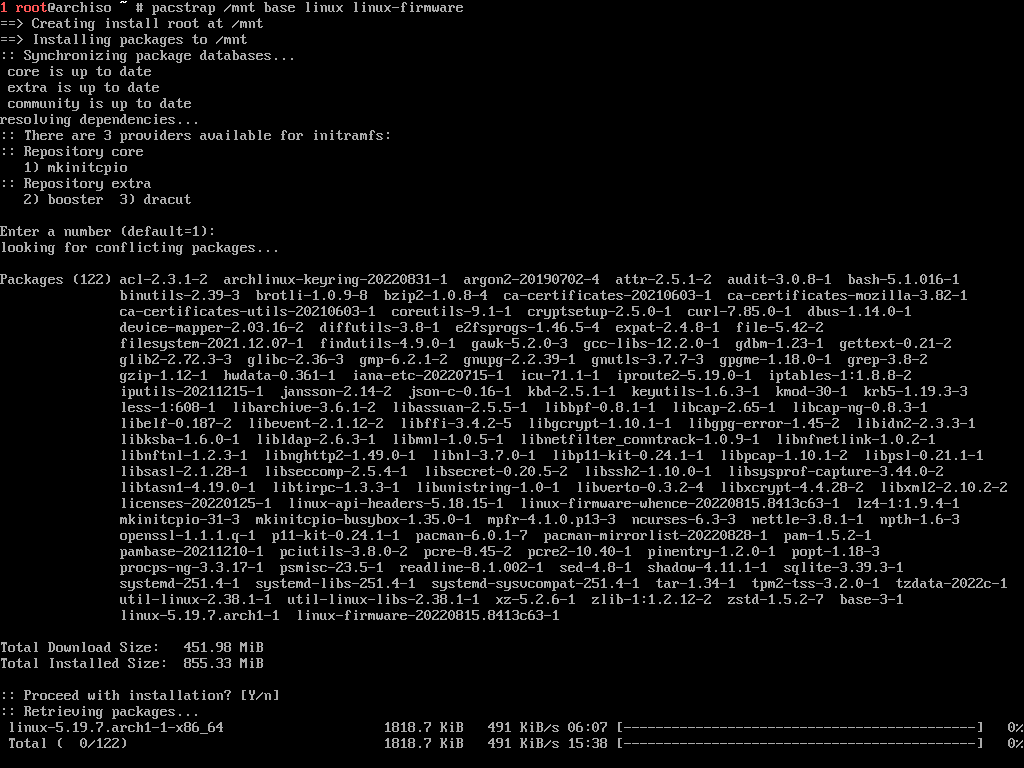 This will install a non-LTS Linux kernel and its firmware. To install the LTS kernel, run the following command:

Once the base system installation is done we will do the further configurations in /mnt.

By this, we are now in the directory where we have created our Arch installation. You can see the change in the shell prompt,

The network manager is one of the most important software in Linux, as its responsible for networking on a Linux machine.

Let’s install it with a few other packages by this command:

It will install NetworkManager and other software needed for wireless connection setup.

Now let’s handover the task of starting the network manager every time we reboot system control by running this,

Create a new initramfs by running the following command for normal Linux:

For installation with the LTS kernel run this

This will configure all settings about the boot process. 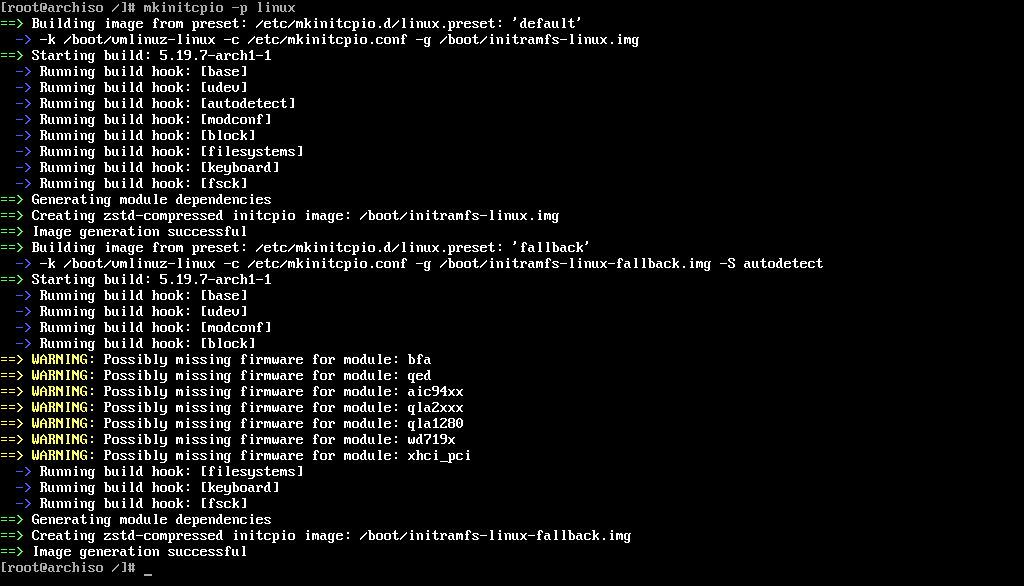 Let’s set up the locale for the installation by choosing a locale:

uncomment the locale you want, 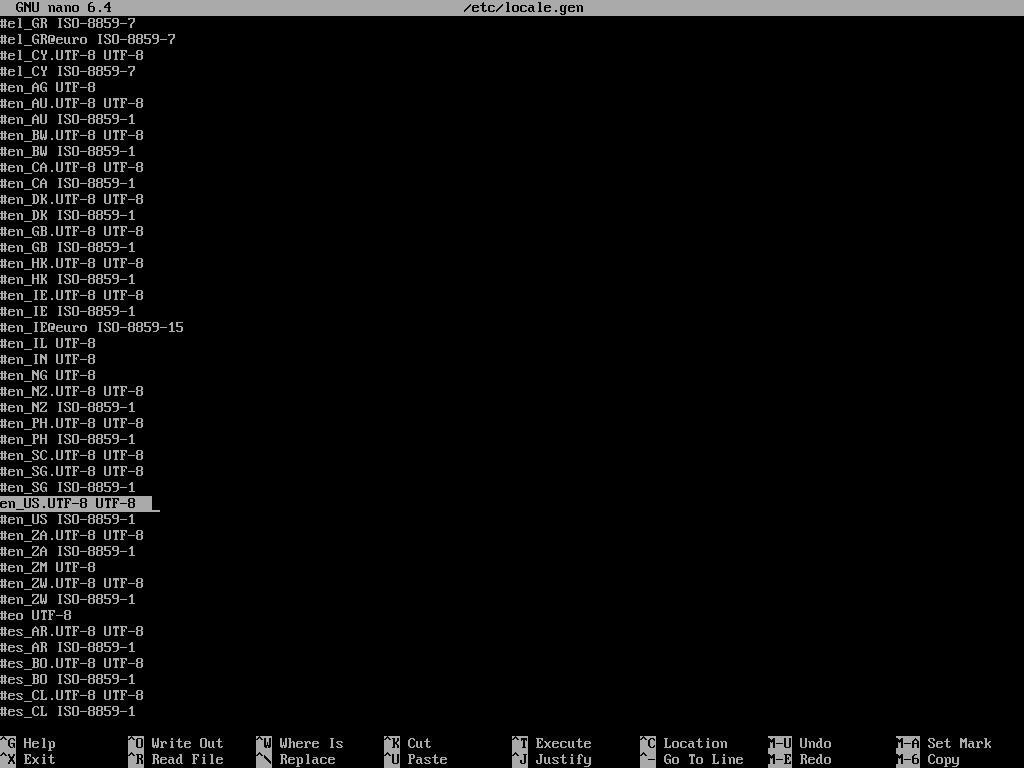 we uncommented en_US.UTF-8 as this is what we prefer to use, after selecting an appropriate locale run the following command:

All done, the selected locale settings have been generated.

Lets setup the timezone according to your location, run the following command to do so:

Here region and city are the places which you want in the timezone.

As we reside in India, we have done this,

The hostname is the name of the machine, we can set it up using the following steps:

Currently, we are using the system as a root user which is not recommended, let’s create a user for ourselves along with sudo privileges,

Now, it has created the user of the username you provided let’s set the password for the user created,

Just a single step lets to enable sudo privileges for non-root users, this is as follows:

now find and uncomment the line the following line, 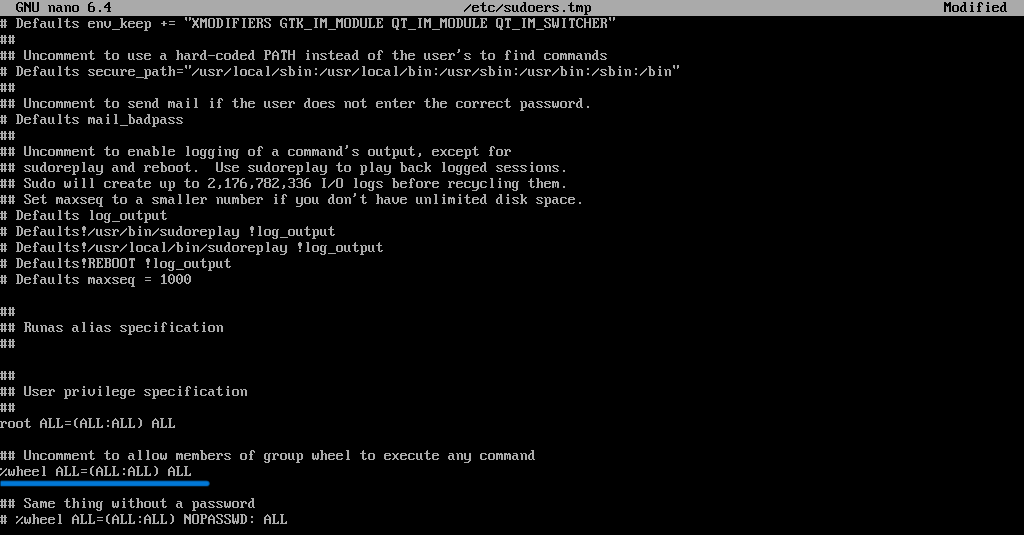 All done, save it by ctrl+ o and exit nano editor by ctrl + x.

All system configurations are missing just one crucial piece of the puzzle. i.e. the boot manager. Linux uses the grub boot manager, this is how we can install it.

We have mounted the boot partition to the /boot/EFI directory where we will set up grub.

Now reboot the system and you have a newly installed Arch Linux.

Previous
How to use a Reverse Shell in Metasploit in Kali Linux
Related Articles
1. Installation and Configuration of Yum in Red Hat Linux 8
2. Difference Between Arch Linux and Kali Linux
3. Laravel | Installation and Configuration
4. Slim Framework | Installation and Configuration
5. How to install and configure Docker on Arch-based Linux Distributions(Manjaro) ?
6. Installing and configuring Jenkins on Arch-based Linux Distributions (Manjaro)
7. How to Install and configure MySQL on Arch-based Linux Distributions(Manjaro)
8. How to Install DNSCrypt and Unbound in Arch Linux
9. arch command in Linux with examples
10. How to Install Tilix Terminal Emulator in Ubuntu/Fedora/Arch Linux?
Article Contributed By :