According to Gauss’s Law, the total electric flux out of a closed surface equals the charge contained divided by the permittivity. The electric flux in an area is defined as the electric field multiplied by the surface area projected in a plane perpendicular to the field.

Now that we’ve established what Gauss law is, let’s look at how it’s used. Does it appear to you that this is already a challenging task? It’ll be a lot easier now. It’s worth noting that Gauss’s Law may be used to solve complicated electrostatic issues with unique symmetry such as planar, spherical, or cylindrical symmetry. So, contrary to popular belief, applying Gauss Law to your work might actually make it simpler!

Let us first look at how we can apply the legislation before learning more about the applications. We need to pick a Gaussian surface that makes evaluating the electric field simple. To make things easier, one should employ symmetry. It’s also important to realize that the Gaussian surface does not have to match the real surface. It might be on either the inside or outside of the Gaussian surface.

Electric Field due to Infinite Wire

Consider a wire that is infinitely long and has a linear charge density λ. To compute the electric field, we utilize a cylindrical Gaussian surface. The flux through the end of the surface will be 0 since the electric field E is radial.

Electric Field due to Infinite Wire

The curved cylindrical surface has a surface area of 2 π r l. The electric flux flowing through the curve is equal to E × (2 π r l).

According to Gauss’s Law: 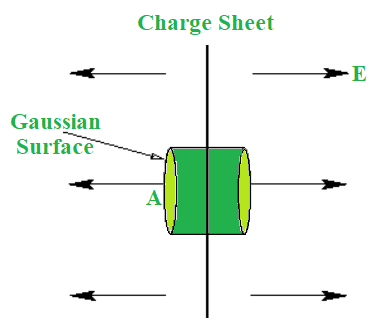 Charge q will be the charge density (σ) times the area (A) in continuous charge distribution. We shall only consider electric flow from the two ends of the imagined Gaussian surface when discussing net electric flux. We may explain it by the fact that the curved surface area and the electric field are perpendicular to each other, resulting in zero electric flux. As a result, the net electric flux:

The above formula shows that the electric field generated by an infinite plane sheet is independent of the cross-sectional area A.

Consider a thin spherical shell with a radius “R” and a surface charge density of σ. The shell possesses spherical symmetry. The electric field owing to the spherical shell can be calculated in two ways:

Let’s take a closer look at these two scenarios. 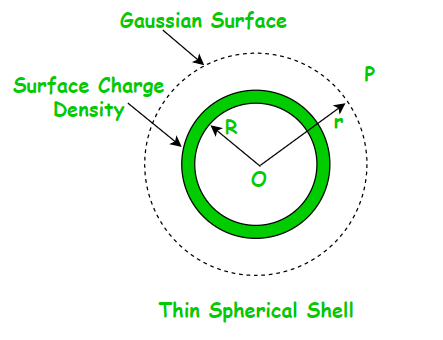 Electric Field Outside the Spherical Shell

The electric field can also be written in the form of charge as:

It’s important to keep in mind that if the surface charge density σ is negative, the electric field will be radially inward.

Electric Field Inside the Spherical Shell

Let’s look at a point P inside the spherical shell to see how the electric field there is. We may use symmetry to create a spherical Gaussian surface that passes through P, is centered at O, and has a radius of r. Now, based on Gauss’s Law,

Since surface charge density is spread outside the surface, there is no charge contained inside the shell. Therefore, the electric field from the above formula is also zero, i.e.,

Problem 1: A hemispherical bowl of radius r is placed in a region of space with a uniform electric field E. Find out the electric flux through the bowl.

The field lines are parallel the axis of the plane of the bowl,i.e., θ = 0°

Problem 3: A cylindrical surface of radius r and length l, encloses a thin straight infinitely long conduction wire with charge density whose axis coincides with the surface. Find the formula for the electric flux through the cylinder’s surface.

A thin straight infinitely long wire has a uniform linear charge distribution. Consider the charge enclosed by the cylindrical surface be q.

The total electric flux through the surface of cylinder, ϕ = q ⁄ ε0

Hence, the formula for electric flux through the cylinder’s surface is λ l ⁄ ε0.

Problem 4: Why Gauss’s Law cannot be applied on an unbounded surface?

Problem 5: A charge of 2×10-8 C is distributed uniformly on the surface of a sphere of radius 2 cm. It is covered by a concentric, hollow conducting sphere of radius 5 cm. Find the electric field at a point 3 cm away from the centre.

Let us consider the below figure. 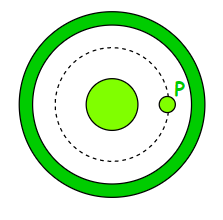 Sphere inside a concentric shell.

Assume we need to locate the field at point P. P should be used to draw a concentric spherical surface. All of the points on this surface are comparable, and the field at each of them will be equal in magnitude and radial in direction due to symmetry.

The flux through this surface = ∮ E dS

This flux is equal to the charge q contained within the surface divided by ε0 according to Gauss’ law.