Apache Pig scripts can be executed in 3 ways as follows:

Before proceeding you need to make sure that you have all these pre-requisites as follows. 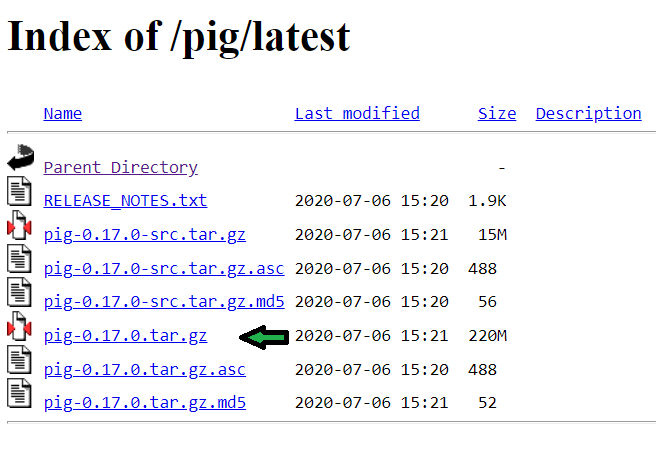 Click the Windows Button and in the search bar type ‘Environment Variables’. Then click on the ‘Edit the system environment variables’. 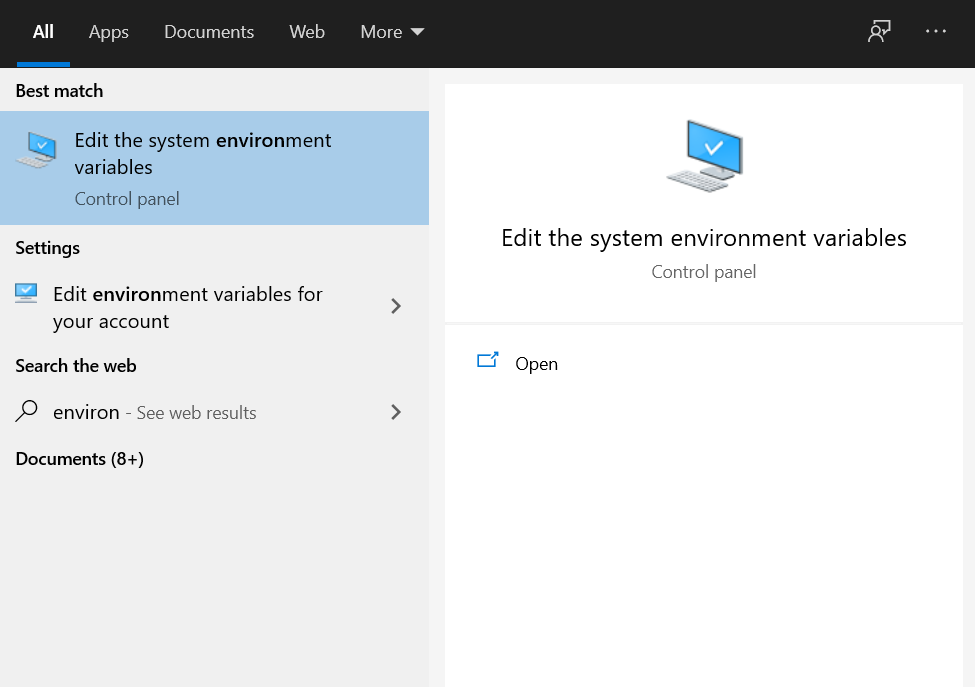 Then Click on ‘Environment Variables’ on the bottom of the tab. In the newly opened tab click on the ‘New’ button in the user variables section.

After hitting new Add the following values in the fields. 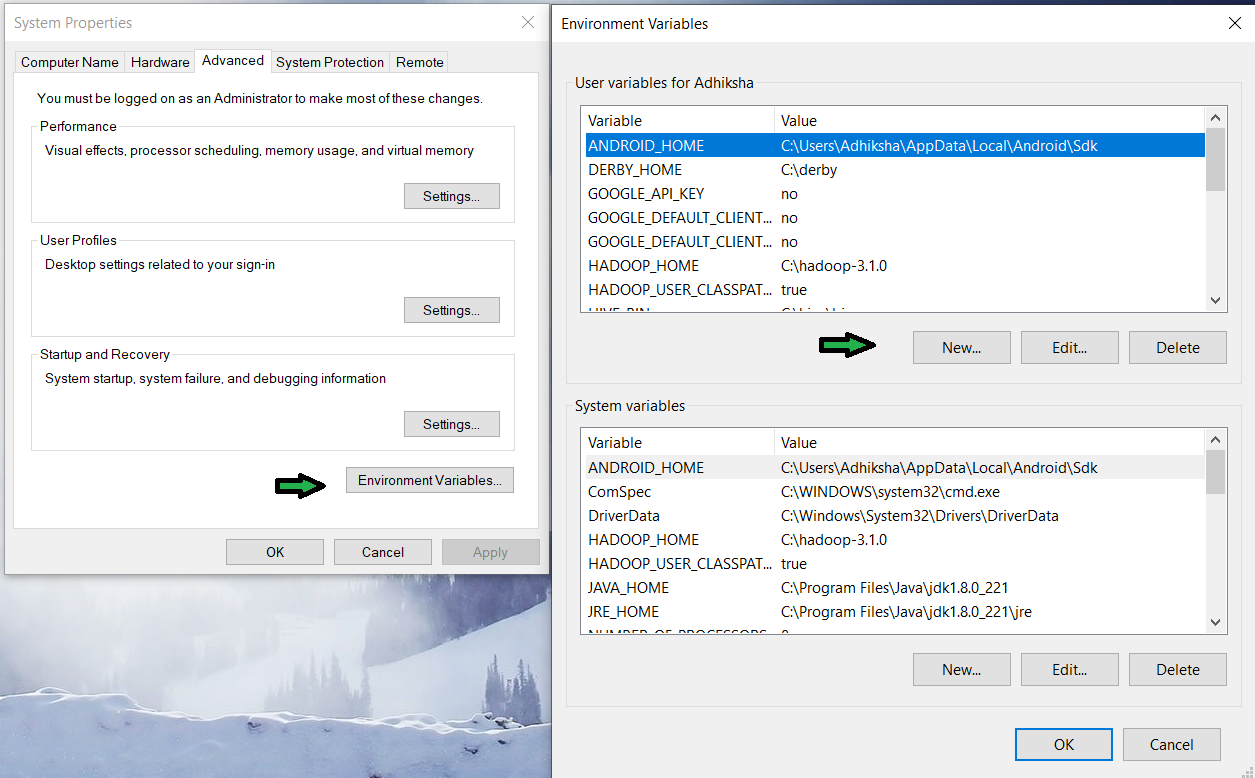 All the path to the extracted pig folder in the Variable Value field. I extracted it in the ‘C’ directory. And then click OK.

Now click on the Path variable in the System variables. This will open a new tab. Then click the ‘New’ button. And add the value C:\pig-0.17.0\bin in the text box. Then hit OK until all tabs have closed. 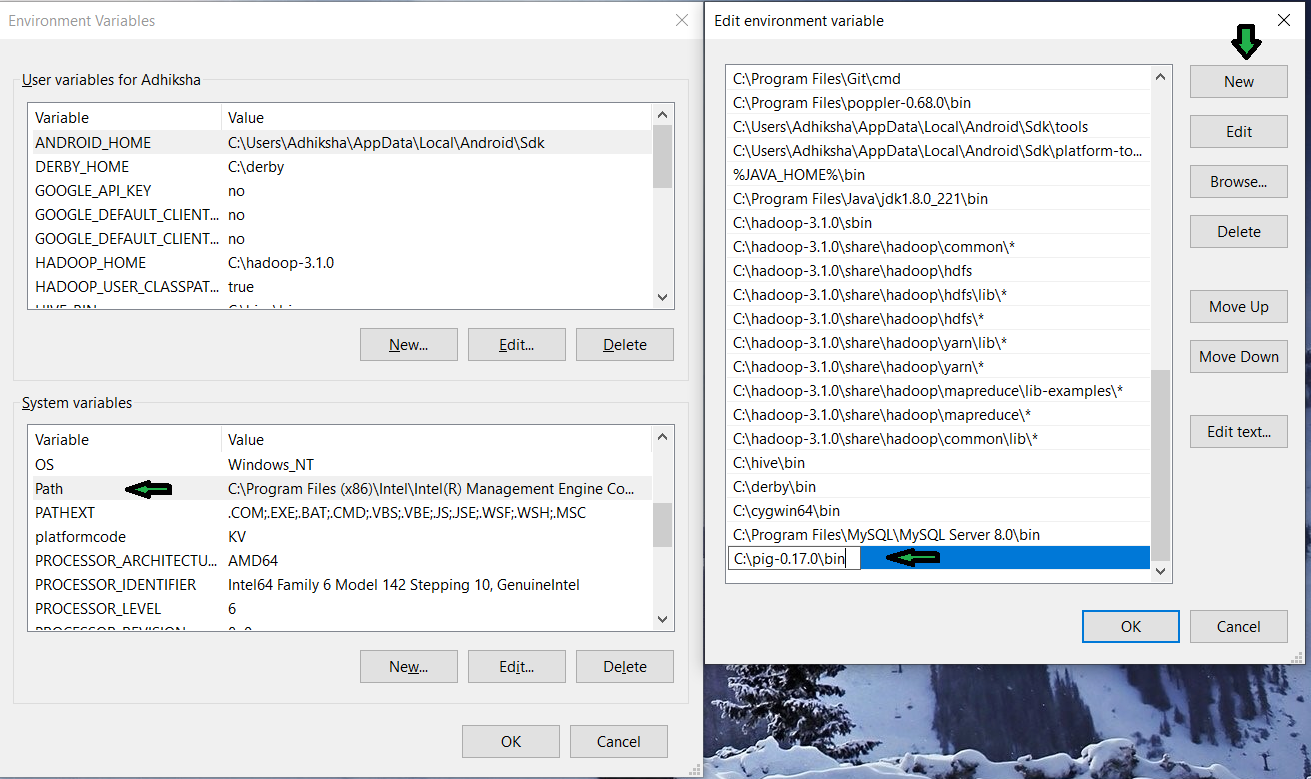 Replace this line by:

And save this file. We are finally here. Now you are all set to start exploring Pig and it’s environment.

There are 2 Ways of Invoking the grunt shell:

Local Mode: All the files are installed, accessed, and run in the local machine itself. No need to use HDFS. The command for running Pig in local mode is as follows.

MapReduce Mode: The files are all present on the HDFS . We need to load this data to process it. The command for running Pig in MapReduce/HDFS Mode is as follows.

1. Download the dataset containing the Agriculture related data about crops in various regions and their area and produce. The link for dataset –https://www.kaggle.com/abhinand05/crop-production-in-india The dataset contains 7 columns namely as follows. 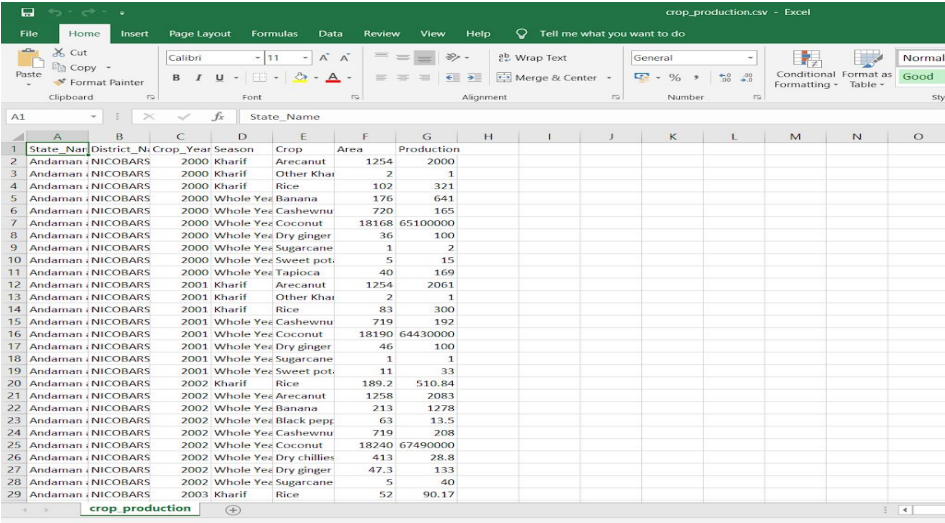 3. Load the dataset in the local mode

You can follow these written queries to analyze the dataset using the various functions and operators in PIG. You need to follow all the above steps before proceeding.

This command will group all the records by the colomn State_Name.

Now store the result of the query in a CSV file for better understanding. We have to mention the name of the object and the path where it needs to be stored. 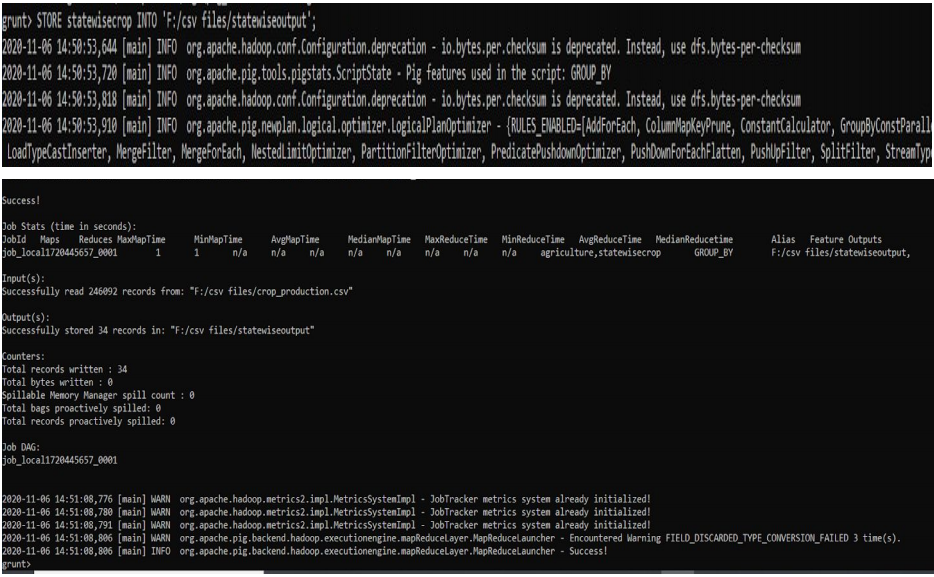 The output will be in a file named ‘part-r-00000’ which needs to be renamed as ‘part-r-00000.csv’ to be opened in the Excel format and to make it readable. You will find this file in the path that we have mentioned in the above query. In my case it was in the path ‘F:/csv files/statewiseoutput/’. 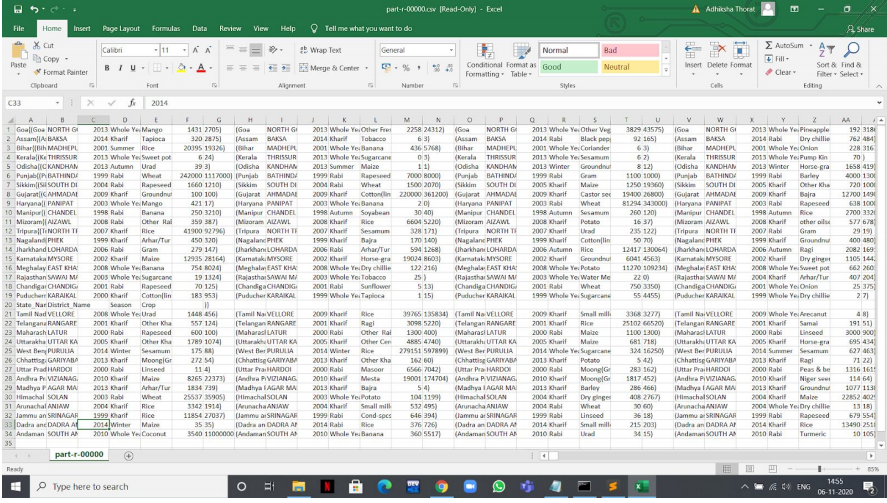 CSV file of output of query 1

You can also check the raw file by opening the command prompt in administrator mode and write the following command as follows.

This command returns the top 2 records of the state-wise output result file. Looks something like this.

In the above query, we need to group by Crop type and then find the SUM of their Productions and Area.

This will return all the output on the command prompt. You can see that we have three columns in the output.

Query 3: The majority of crops are grown in a Season and in which year.

In this query, we need to group the crops by season and order them alphabetically. Also, this will tell us which crops are found in a season and with year.

The output will be in a file named ‘part-r-00000’ which needs to be renamed as ‘part-r-00000.csv’ to be opened in the Excel format and to make it readable. You can check the csv output by opening the command prompt in administrator mode and running the command as follows.

You can check the output from the ‘part-r-00000.csv’ by opening the file. You can see all the distinct seasons in the first row followed by all the crops and their years of production.

Output of this query number 3

Query 4: Average crop production in each district after the year 2000.

First, we need to group by district name and then find the average of the total crop production but only after the year 2000.

You can check the output from the ‘part-r-00000.csv’ by opening the file. This file will contain two columns. The first one has all distinct district names and the second one will have the average production of all crops in each district after the year 2000. 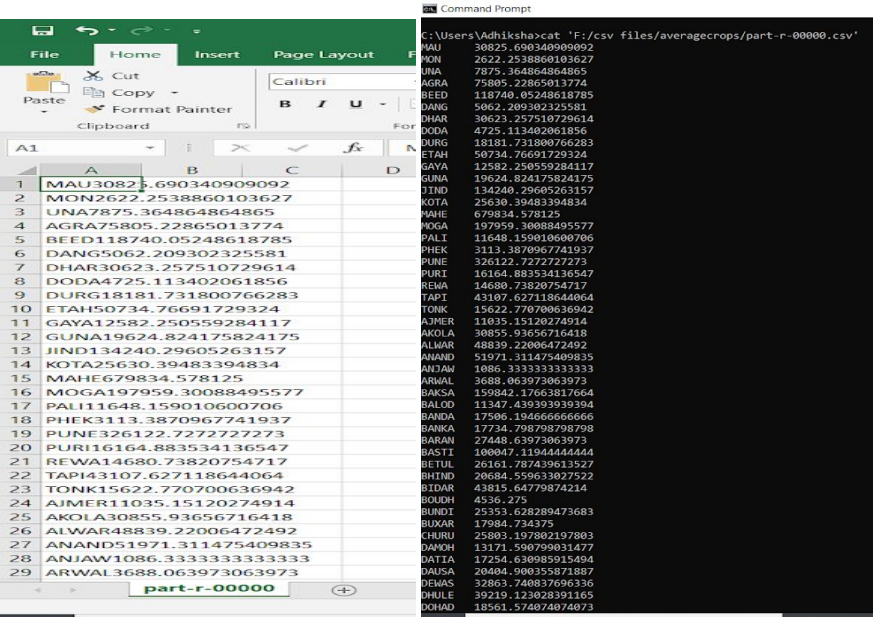 Output of the query number 4

Query 5: Highest produced crops and details from each State.

First, we need to group the input by the state name. Then iterate through each grouped record and then find the TOP 1 record with the highest Production from each state.