Anomalous Behavior of Lithium and Beryllium 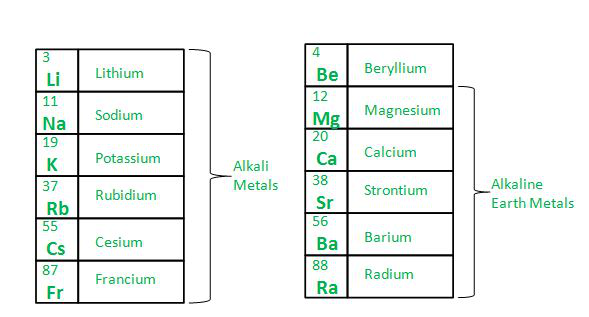 2. Alkali metals react with water to form hydroxides and releases H2 gas but the reaction of lithium with water is less vigorous than other alkali metals yet the value of Standard potential is most negative for lithium.

5.  Nature of alkali metals are reducing in nature while lithium is known as the strongest reducing agent.

1. Lithium is used in making different types of alloys one is known as white metal.

2. Lithium is also used in storing energy in electrochemical cells.

3. Lithium with aluminium is very strong and is used in the manufacturing of parts of different aircraft and fighter planes.

4. Some isotopes of Lithium is used in nuclear reactions.

5. Strong and light armour plates are manufactured by mixing lithium and magnesium.

Reasons for Anomalous properties of Lithium

There are mainly two reasons for the anomalous properties of lithium :

Some major differences between Lithium and other Alkali Metals

1. Lithium Chloride has the ability to form hydrates while the rest of the alkali metals cannot form hydrates.

3. All alkali metals have the tendency to form ethynide when reacting with ethyne but lithium is the exception.

4. On heating, nitrates of alkali metals form nitrites while in the case of lithium nitrate it gives lithium oxide.

1. Alkaline earth metals react with water to form hydroxides. Among group 2 elements Beryllium is the element which does not react with water because of the protected layer which formed on the surface of this alkaline metal.

2. Alkaline earth metals also react with air to form different oxides of metals. Among group 2 elements Be is the element that does not react with air also because of the protected layer which formed on the surface of these metals.

5. Alkaline earth metals have a tendency to react with acids to release hydrogen gas but Beryllium does not react to give hydrogen gas.

1. Beryllium  is used in making different types of alloys.

2. Beryllium when mixed with copper is used in the manufacturing of powerful springs which are used in shockers of automobiles.

3. Used for making mirrors of spacecrafts.

4. Some isotopes of Beryllium is used in nuclear reactions.

5. Beryllium is used in making different parts of computers, missiles and aircrafts.

Reasons for Anomalous properties of Beryllium

There are mainly two reasons for the anomalous properties of beryllium :

1. Size : Atomic size of beryllium is really very small as compared to other elements of the same group so it does not follow same trends as other alkaline earth metals do.

Some major differences between beryllium and other Alkaline Earth Metals

2.  Beryllium does not react to with acids easily because of the protected layer which formed on the surface of Beryllium.

3. Beryllium Sulphate can be easily dissolved in water but other sulphates of alkaline earth metals are not soluble in water.

4. Carbonates of alkaline earth metals are stable but beryllium carbonate is unstable so to keep it safe it is stored in the carbon dioxide environment.

5. Beryllium nitrate is anhydrous in nature while other nitrates of alkaline earth metals are not anhydrous.

Beryllium does not react with acids easily as it is being protected by a layer of the oxide film which forms at the surface. But Beryllium reacts with acids more easily when beryllium is in powdered form.

Question 2: Why does the solubility of alkaline earth metal hydroxides in water increase down the group?

The hydroxides of alkaline earth metals have more anion than cations so the cationic radius affects the lattice energy and as a result lattice energy become less than hydration energy as size increases so the solubility of these metal hydroxides increases in a group from top to bottom.

Question 3: Solubility of alkaline earth metal carbonates and sulphates in water decrease down the group explain why?

In alkaline earth metal carbonates and sulphates the size of anions is bigger when compared to cations so the cationic radius will not affect the lattice energy and hence lattice energy will remain constant but hydration energy decreases down the group so as a result, the solubility of these metal carbonates and sulphates decreases down the group.

Question 4: What is Diagonal Relationship between Beryllium and Aluminium?

Some of the similarities are: