Animations in MS PowerPoint are the most interactive way to present the data to someone. Nowadays, animations keep people engaged with the concept which they are explaining using the help of PowerPoint. PowerPoint animations play a vital role to understand the most complicated topics very easily. PowerPoint is commonly used by people in business and also the students to create the presentation.

There are multiple features available in MS PowerPoint, Among all, we will discuss a few of them below;

There are multiple options available according to the requirement, based on which presentations can be prepared. You can see the “Add Slide” option under the home tab itself.

We can attach audio, videos, images, etc inside the PowerPoint presentation to make the presentation more interesting. You can see all of them under the Insert tab.

MS PowerPoint has various themes using different types of textures and backgrounds as in-built. We can also create our own type of slide design and use it. You can see this option under the Design tab.

PowerPoint animations are used to create games or movies. But majorly it is used for the purpose of education and business sectors. You can see this option under the Animations tab. Now we will learn more about animations in MS Powerpoint.

Animations are one of the most important features of MS PowerPoint from which we can make creative templates out of it. Now we see the various options present under the animations tab and discuss them one by one:

Animation effects that you have applied will show when you play the slide show. You can preview the animations quickly for the current slide without clicking the option of the slideshow.

There are so many in-built animation effects provided by MS PowerPoint, and they are categorized into four types: 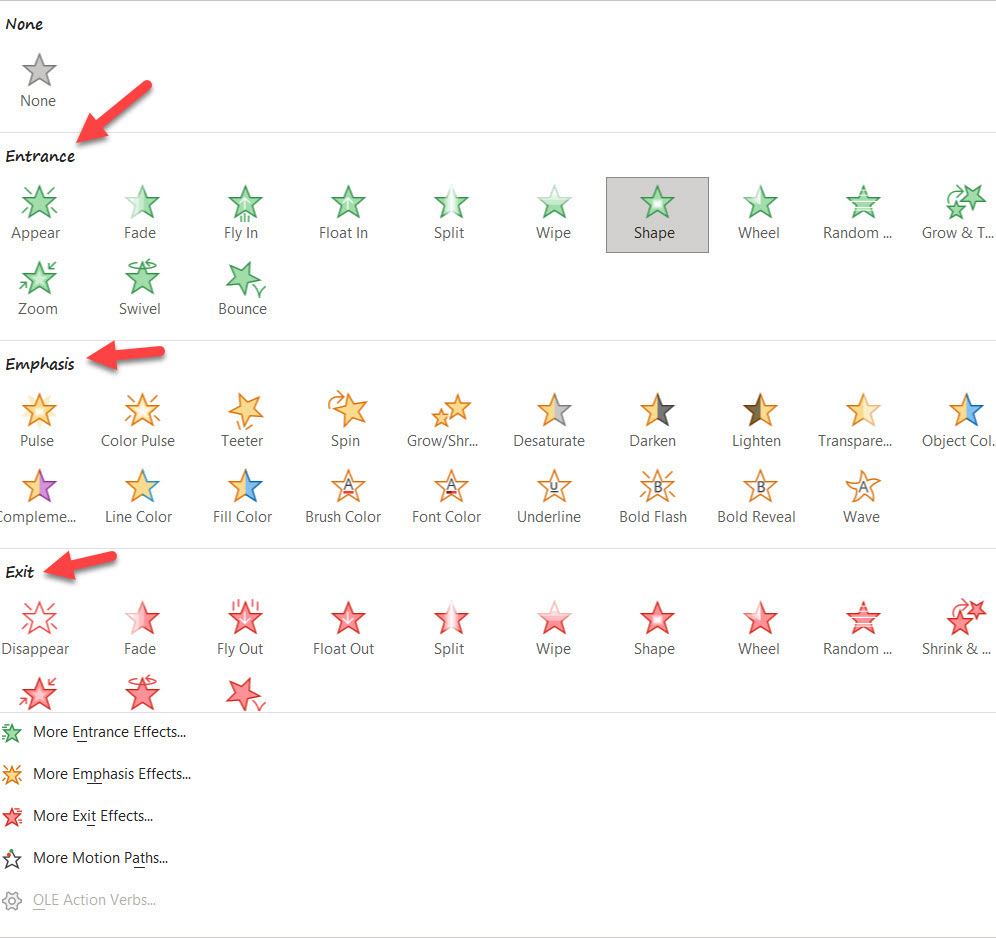 Steps to apply the animation:

Step 1: Select the object you want to animate.

Step 2: Go to the animation tab and click on the dropdown to view all types of animations.

Step 3: A drop-down menu of animation effects will appear. Select the desired effect.

Step 4: The effect will apply to the object. In the Slide pane, a star symbol appears next to the slide, by which we can confirm that animation is applied. 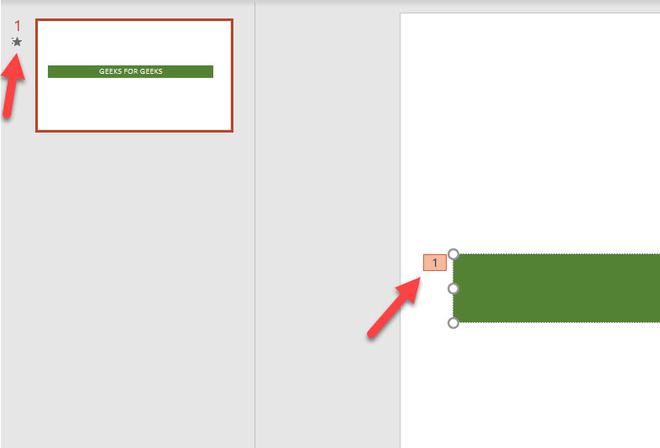 Some effects will have options you can change. For example, in the effect of the random bars, we can control that we need vertical or horizontal bars. We can use these options by accessing the Effect Options command in the Animation group. It totally depends on the animation which is selected. 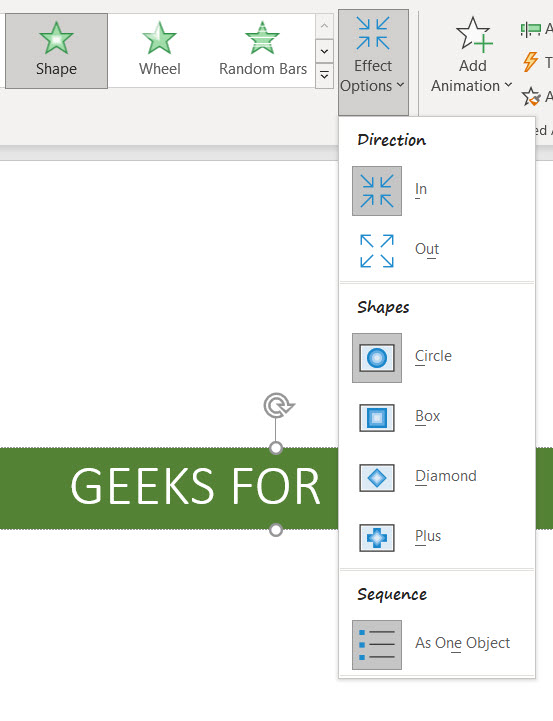 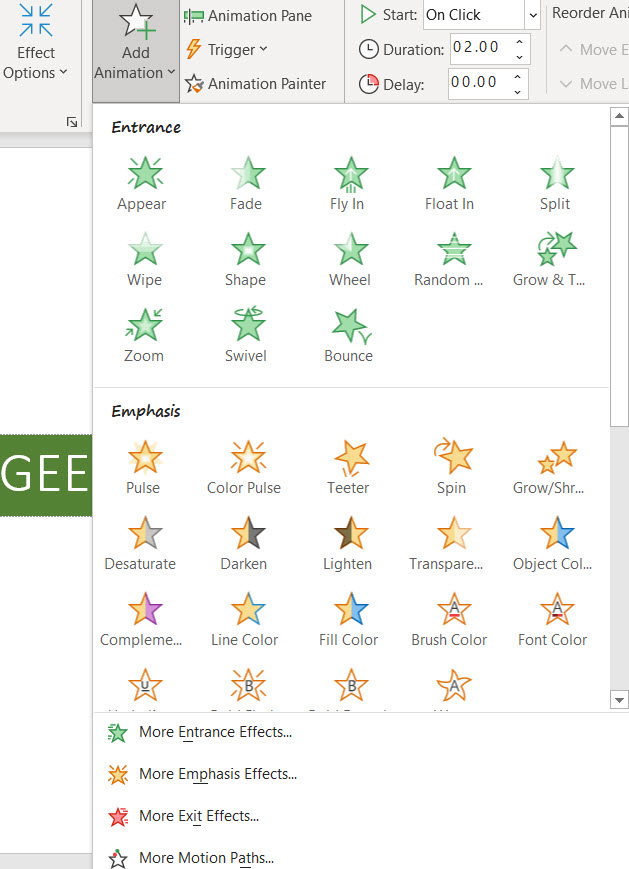 Steps to apply multiple animations to a single object:

Step 3: In the Advanced Animation group, we need to click the Add Animation command to view the available animations.

Step 5: If the object has multiple effects then for every effect it will show numbers according to the priority i.e numbers indicate the order in which the effects will occur.

The Animation Pane option has the power to manage the timing of particular animations. You can easily modify the effects related to the animations like reordering the animations according to the preference and time interval.

Step 1: Open the Animations tab, on the right side click on the animation pane option.

Step 2: A separate dialogue box gets opened on the right side of the window. It shows all the effects for the current slide in which they will appear.

Step 3: We can also set the start time, delay time, and also we can set when to move to the next slide, for this, we have 3 options:

Step 4: We can reorder animations with the help of two options which are a) Move Earlier b) Move Later 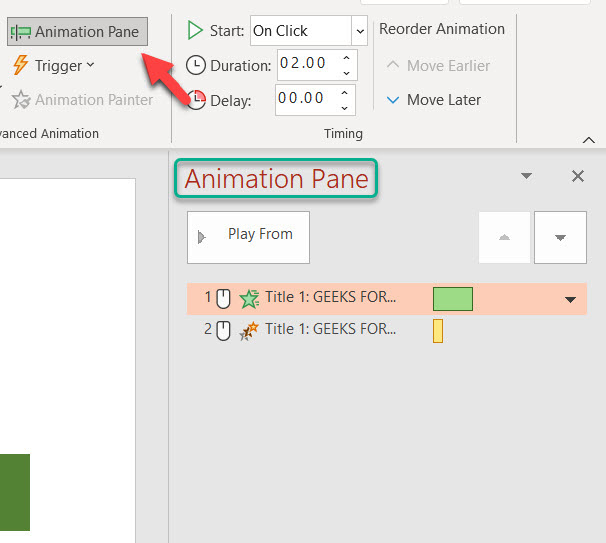 Note: We can also reorder the animations according to our requirement, for that we just need to click and drag. 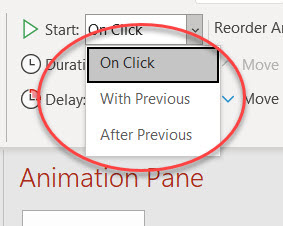 Step 1: From the Animation Pane, select an effect and right-click on it. 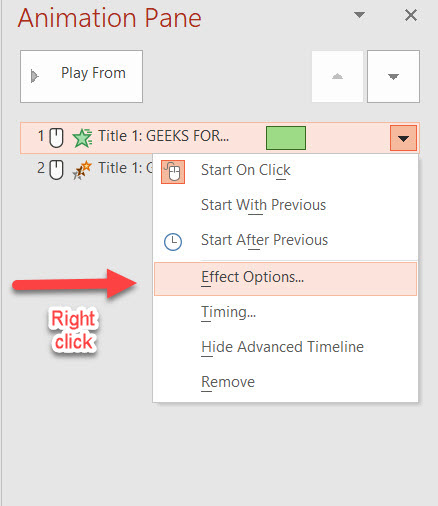 Step 3: The Effect Options dialogue box will appear. You can add extra enhancements to that particular effect: 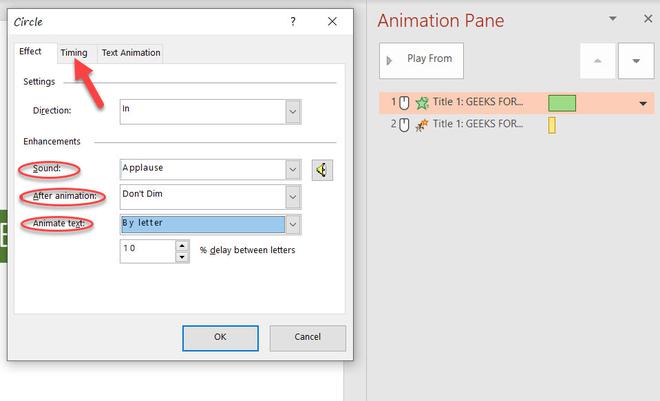 Step 4: In the timing tab, we can add the delay before it starts and change the duration of the effect, and control whether the effect repeats or not. 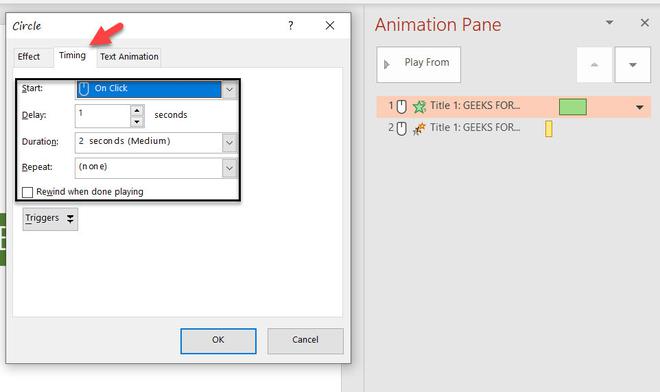 A trigger is an object that you click to cause the animation to occur on a slide. Animation can be anything like motion, exist emphasis, or entrance motion path. You can click on any one object to trigger the animation of another object, but it is also possible to make the trigger object and the animated object the same. Generally, the animations happen in a preset order. 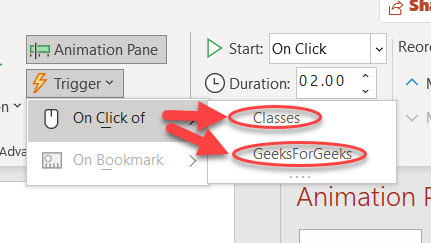 Step 1: Firstly select the object to which you want to add a trigger.

Step 3: Now you can see a list of animations applied to that object.

Step 4: We can select what should happen if we click on that object i.e which animation should take place. 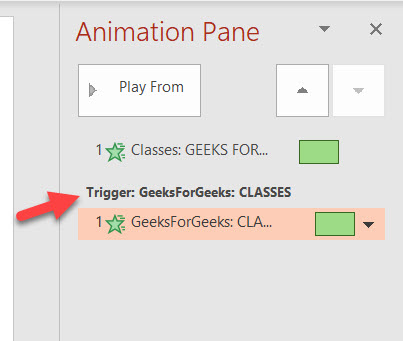 After we have applied the trigger we can confirm the changes by seeing an energy type symbol. 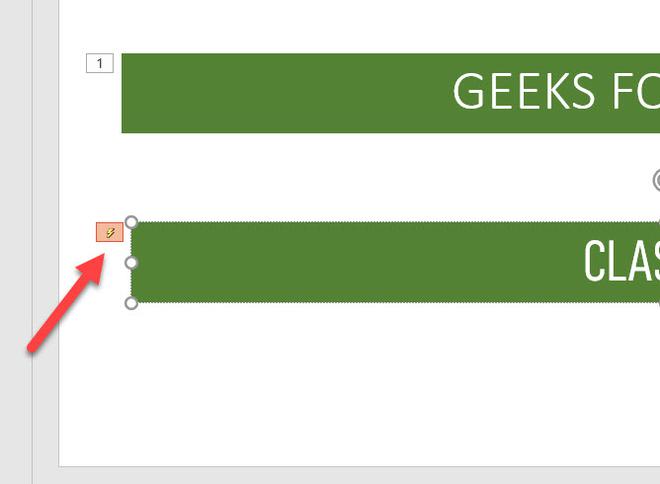 It applies animation characteristics and effects equally to other objects with one click. Sometimes we need to apply the same animation to all the objects in PPT at that time animation painter is very useful. 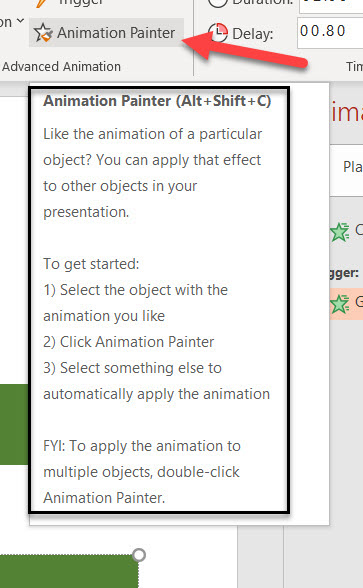 Initially, in the whole slide, we have only two titles they are “Geeks For Geeks” and “Classes” and for both the titles we have applied 2 different animation effects which are “Fly-In” and “random bars” respectively. You can see the below images: 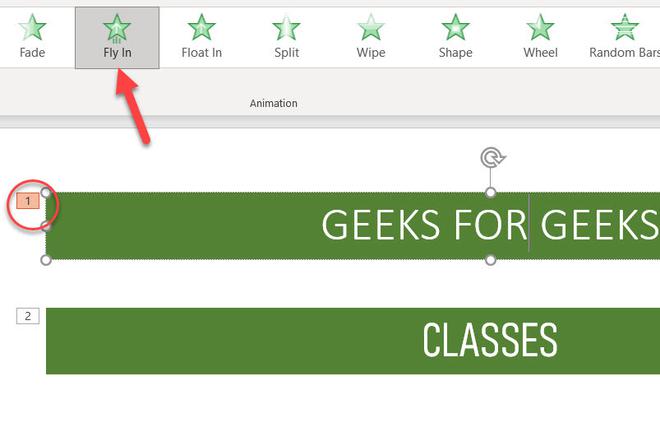 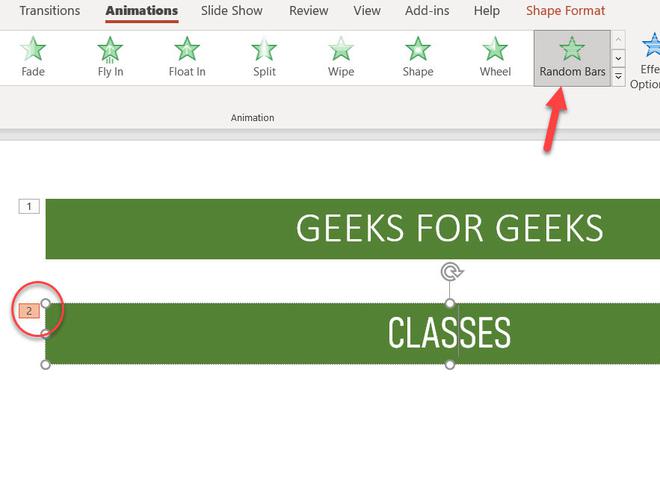 Step 1: Firstly select the object whose animation effect should be copied. (second title)

Step 3: After that, we can observe the difference by previewing it.

Step 4: You will observe all objects in that slide are following the same type of animation. (first title animation effect will change)