AngularJS Factory Method makes the development process of AngularJS application more robust. A factory is a simple function which allows us to add some logic to a created object and return the created object. The factory is also used to create/return a function in the form of reusable code which can be used anywhere within the application. Whenever we create an object using factory it always returns a new instance for that object. The object returned by the factory can be integrated(injectible) with different components of the Angularjs framework such as controller, service, filter or directive.

Use:
In practical Scenario Factory generally acts as container or class for a collection of functions which fulfills different features of the application. When using with a constructor function it can be initiated within different Controllers.

Example:
The Following example illustrate the use of factory code instantiated inside a controller to generate a random number 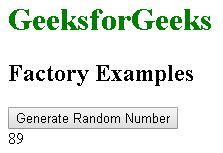 On Clicking the generate random number button we get a different number every time. In this example, we use the factory method to define a function which carries a variable and using the Math.random we store a random value to that variable every time this function is called. This function is then called in the controller whose $scope variable carries the random value from the called function we then call this controller to our HTML code to display the result.

Example: This example make use of factory to create a function to find addition or subtraction of two numbers. this function is then loaded in the controller $scope variable which passes them to the html code for displaying the results. 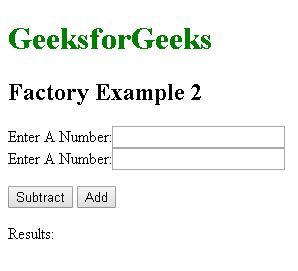 After entering the input clicking on the add/subtract button displays the result: 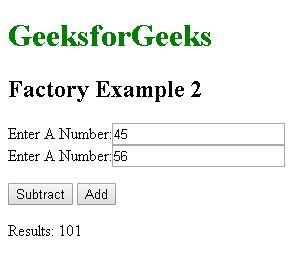