Average angular velocity is defined as the ratio of angular displacement to the time taken by the object to undergo the displacement. It is denoted by ωav.

Consider the movement of a particle on a circular path with a centre at O. 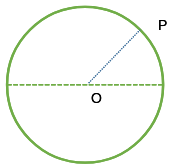 Let us assume that in time Δt the particle displaces by an angle of Δθ. 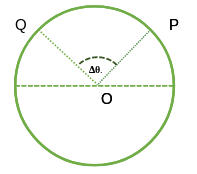 Since Δθ is scalar, average angular velocity is a scalar quantity.

It is the limiting value of the average angular velocity of the object in a small time interval, as the time interval approaches zero. It is denoted by ω.

Angular velocity is measured in radian per second and its unit is rad/s.

Since dθ is a vector, ω is also a vector.

Linear velocity is the cross product of angular velocity and radius of the circular path.

r = position vector from the centre of the circular path (radius).

The time taken to complete one revolution or to displace by an angle of 2π radians is called time period and is denoted by T.

The frequency of an object is the number of revolutions completed in a second. It is denoted by the Greek letter nu (ν).

Problem 1: Calculate the angular velocity of the minute hand of a clock.

The minute hand completes one rotation in 60 minutes.

Problem 2: A ball is revolving in a circle of diameter 4 m with velocity 20 m/s find its angular velocity.

Problem 3: An object revolves in a horizontal circle of radius 12 m with a frequency of 4 hz. Find its linear speed.

Problem 4: An object has a constant angular velocity of 5 rad/s. What is its angular displacement in radians after 12 seconds?