A hydrocarbon is an organic molecule made completely of hydrogen and carbon in organic chemistry. Hydrocarbons are an example of hydrides in group 14. Hydrocarbons are colourless, hydrophobic, and have just a faint odour. It’s impossible to generalise further due to their varied molecular architectures. The burning of fossil fuels, including fuel production and combustion, accounts for the majority of anthropogenic hydrocarbon emissions. The emissions of plants are a natural supply of hydrocarbons such as ethylene, isoprene, and monoterpenes.

Alkynes are customarily known as acetyls. Like different hydrocarbons, alkynes are additionally hydrophobic.

Hydrocarbons are the simplest organic compounds, with simply carbon and hydrogen as constituents. These can be found in nature in the shape of objects that we use every day. As a result, hydrocarbons are thought of as the organic compounds’ parents. All other compounds, on the other hand, are thought to have been made by substituting functional groups for one or more hydrogen atoms.

A carbon-carbon triple bond comprises of one in number σ bond and two feeble π bonds. 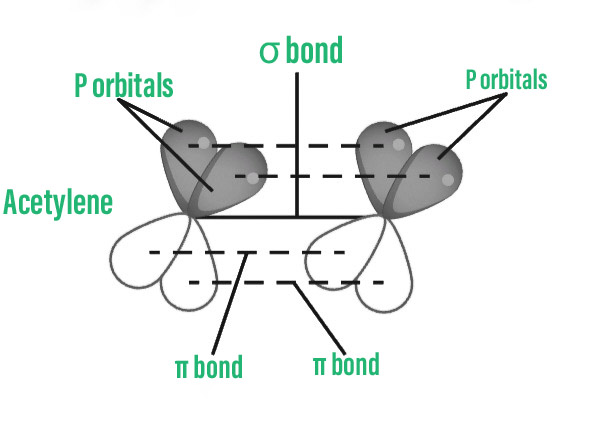 The overall recipe of this unsaturated hydrocarbon is CnH2n–2, where n–2,3,4,5… … . As per the IUPAC framework, the names of alkenes have a postfix-yne, and the prefix relies upon the number of carbon particles. A few names of the alkynes are as per the following:

The structural isomerism of alkynes is as follows: 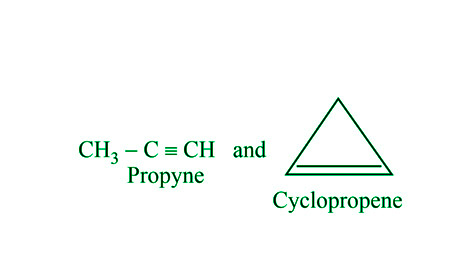 Methods of Preparation of Alkynes

The following are some of the most common alkyne preparation methods: 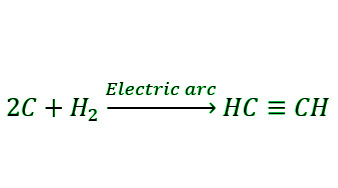 The properties of alkynes essentially follow the similar examples to those of alkanes and alkenes.

Going to the synthetic properties of alkynes, we start with their marginally acidic nature. Presently Alkynes are marginally electronegative in nature. The triply fortified carbon particles in alkynes are sp hybridized, Whereas like in alkanes the single bond iotas are sp3 hybridized, causing the distinction in the electronegativity. This makes it simpler for them to draw in the common electron pair of the C-H bond. So when we respond to a solid base like NaNH2 with ethyne, we will get sodium acetylide and freed hydrogen (H2) gas. Yet, such responses won’t occur in alkanes and alkenes. The end is that the hydrogen particles connected to the carbon-carbon triple bond in alkynes are somewhat acidic in nature. It is to be noticed the other hydrogen particles exposing these ones are not acidic.

Alkynes undergo hydration reactions when the circumstances are right. When alkynes react with halogens, hydrogen, and other similar elements, they produce a saturated molecule. Two hydrogen atoms, halides, or halogens can be added to their structure since they contain a triple bond. 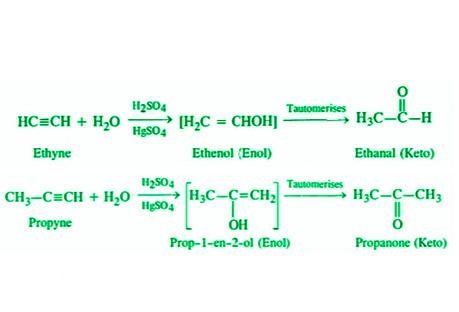 Question 1: What is an alkyne?

Alkynes are customarily known as acetyls. Like different hydrocarbons, alkynes are additionally hydrophobic.

Question 2: What are the properties of alkynes?

The first three alkynes are colourless gases, the next eight are liquids, and the higher alkynes are solids. They are odourless, insoluble in water but soluble in organic solvents due to their non-polar nature, have high melting and boiling temperatures, and are lighter than water.

Question 3: What is the main use of alkynes?

Acetylene, often known as ethyne, is the most common alkyne chemical. The following are a few examples of applications:

Question 4:  How alkynes are acidic in nature?

Alkynes have a small negative charge. This is due to the sp hybridization of the triple linked carbon atoms in alkynes, which makes it simpler for them to attract the shared electron pair. Alkyne molecules can readily lose hydrogen as a result. As a result, the acidity of the hydrogen atom connected to the triple bound carbon atom.

Question 5: Why do alkynes have higher boiling points?

The melting and boiling temperatures of alkynes rise as the molecular mass of the alkynes increases. Alkynes, on the other hand, have greater melting and boiling points than alkanes and alkenes. This is due to the fact that alkynes are linear and their molecules are packed closer together in space.

Question 6: How are alkynes prepared?

Chlorine or bromine is mixed with an inert halogenated solvent like chloromethane to produce a vicinal dihalide from an alkene. To make an alkyne, the produced vicinal dihalide is heated and reacted with a strong base.

Question 7: How can we reduce alkyne to alkene?

Complete Interview Preparation
View Details
System Design-Live Classes for Working Professionals
View Details
Data Structures & Algorithms- Self Paced Course
View Details
Most popular in Class 11
Most visited in School Chemistry
We use cookies to ensure you have the best browsing experience on our website. By using our site, you acknowledge that you have read and understood our Cookie Policy & Privacy Policy